The Laois band Pogueology has been upgraded to play at the Electric Picnic Salty Dog stage.

The Pogues tribute act originally played at Jimmie Lee's Juke Joint on Friday night but the gig had to be postponed when the floor of the venue collapsed.

The sheer volume of people at the wooden cabin style venue caused the floor to slowly crack and cave in.

Gardai were on the scene and the venue was cordoned off. No one was injured in the incident. It is possible that health and safety questions may now be asked in relation to the venue which could not hold the volume of people who fit inside.

Much to the delight of the seven band members, Pogueology has now been rescheduled to play at on the Salty Dog stage on Sunday night.

The first three songs by Pogueology before the floor collapsed.

The Salty Dog stage is celebrating ten years at the picnic this year and the shipwreck/pirate themed stage is one of the first things many Electric Picnic fans recognise when they make the annual pilgrimage to Stradbally.

The Salty Dog stage is in a wide open wood area with no floors that could fall through.

This venue will be able to cater for the huge Pogueology fanbase and the gig is set to be a fantastic end to the weekend.

People from Laois and beyond are really looking forward to the gig with comments like these coming in on Facebook:

"That's what I like ...a real band who can hammer out the tunes and bring the house down. Fair play lads..fair play."

"I've lashed a guitar off an amp a few times in me day but that was something else. Definitely my highlight of the weekend so far. Well done lads."

"I'd said from the start it wasn't the right venue for you guys- way too small!!! Well I guess ye are the only band who literally brought the house down at Electric Picnic."

People seem to be very happy that the gig has been upgraded to a bigger stage and everyone is in high spirits for the new schedule of 11pm Sunday night. 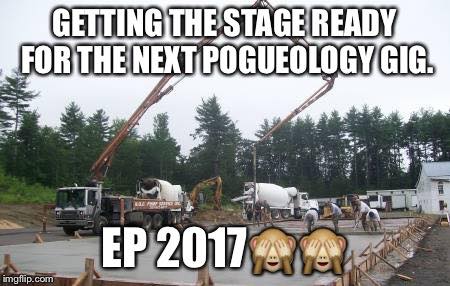 Band members received weekend passes so they could stay and enjoy the festival until their new slot rolls around.

Other bands playing at the Salty Dog stage over the weekend include The Hot Sprockets, Otherkin, Jinx Lennon, The Pale and many more.