Mountmellick flood: Family still homeless in emergency hotel and clean up yet to start in homes

A family of four is still homeless and living in emergency accommodation in a Portlaoise hotel after their house was flooded in Mountmellick over two weeks ago.

Fifteen days on from the flooding that hit the town on Wednesday, November 22, a spokesperson for Laois County Council Housing Department confirmed that the family is still staying at a Portlaoise hotel.

“There is one family of four still in emergency accommodation. However, it is envisaged that alternative accommodation will be available for this family early next week,” the spokesperson said.

A total of 31 people, 19 adults and 12 children, were placed in Laois County Council emergency accommodation services after the floods unexpectedly hit homes in Mountmellick last month.

A number of people stayed in their homes despite the damage that was caused or stayed with relatives.

Betty Knight is staying with her daughter and only goes to her house during the day to collect post and clean up but she told the Leinster Express that absolutely nothing has changed in her house since it was flooded two weeks ago.

Betty has lived in a bungalow in Manor Grove over the bridge on Manor Road for the last ten years. Manor Road was one of the worst affected areas during the Mountmellick flooding. She has two adult children and her husband passed away a number of years ago.

“Nothing is done yet really. I have contacted the insurance company they said they are going to send me €10,000 in payments to try and get back but I haven’t received that yet so I am just waiting.

“Just floating along now, doing nothing and trying to keep the dirt down until I get the word to go ahead properly.

“Living conditions are not great I am just here during the day, there is nothing, no floors, I bought two beds they are getting delivered tomorrow but they will stay in plastic until I get something done.

“Everything needs to be done, the tiles need to come up so everything has to be done and I think I need a new kitchen because the bottoms of them is starting to blister so they probably all have to come out.

“Haven’t got a clue when insurance payment will come through it is terrible.

“There is bags and boxes and crates and stuff everywhere. No architrave, no skirting boards or anything on the walls everything is bare, concrete floors in all the other rooms,” Betty said.

Flick through the gallery of photos above to see the damage in Betty's house.

On the corner of Manor road and Derrycloney, the beautiful bungalow home of Jacinta Bracken and her sons Conor, Niall and Adam, could not get insurance cover because of its proximity to two rivers.

They have had to rip up almost every wooden floor and all the skirting, estimating the replacement cost of floors alone at €14,000.  The piles of stuff outside the house includes a desk Conor bought a week before the flood to start a course in Carlow IT.

Conor Bracken who spoke to the Leinster Express during the flood as he was clearing furniture out of his damaged family home also said that absolutely nothing has changed in their house in the last two weeks.

“It hasn’t started yet, we are waiting to see what Humanitarian Aid we get. We are still staying in the house,” he said. 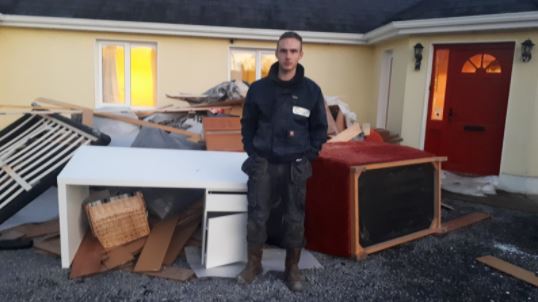