All roads led to the Portarlington French Festival which brought Laois to life at the weekend with crowds gathering to join in a huge number of events, celebrating the town's historic connection to France.

The festival was bigger and better than ever this year as it goes from strength to strength there was something for everyone going on in the town.

Secretary of the organising committee David Hainsworth said the weather and the variety of events helped to keep people around for the successful weekend.

“The people of the town really got into the spirit of things they wore blue and red and there were a few berets around too,” he said.

“We are very happy with how it went, the weather was excellent which helped to draw a good crowd and the different events drew people up and down Main Street,” he added.

While the whole weekend was a huge hit, some of the highlights included the Snail Eating Championship where local man Ed Gallagher was crowned the winner and a rubber duck race up the river barrow.

“There was a couple of hundred ducks floating up the River Barrow at one stage, it was a good laugh,” David added.

A flea circus and fairy stories in the Kids Zone were new this year and went down a treat with children and families.

Can can dancing, a festival market, festival train, and Joe Laffart from JL Sounds playing music on stage meant the festival atmosphere was in full swing all weekend.

By tradition the Main Street boasted an artisan market with various local food and craft stalls which was hugely popular .

Sporting events played a huge role in bringing the festival together with the Port's Fittest Family Competition and Laois/Offaly Under 8 Football Blitz on Friday evening, a GAA Challenge match between Gracefield and Portarlington on Saturday and Tour de Port and a Derryounce walk on Sunday.

Local man Millie Mulhall was named the strongest man in Port after a competition saw huge weights carried up and down Main Street.

The live music also proved to be a hit with Con Jovi, Al & The Essentials, Super Bass, Túras, Macey South and The Big

Generator all taking to the stage over the weekend. Huge crowds gathere d to enjoy the music in the summer weather.

The organising committee wish to thank the members of the community who helped out in cleaning up the streets every evening after the festival fun.

An Garda Síochána were a great help to the organisers as their presence made people feel secure.

“Everything worked out over the weekend and people had lots of things to do. We are trying to get feedback now to see what will work again next year,” David added.

Communications officer for the festival, Arlene Foy is delighted with how the festival went.

"We were delighted with the turnout and blessed by the weather. Messages of thanks are already coming in from those who attend the festivities and we are delighted the weekend went so well," she said.

Big Generator posted this picture of the packed street enjoying the music and atmosphere at their gig on Sunday evening. 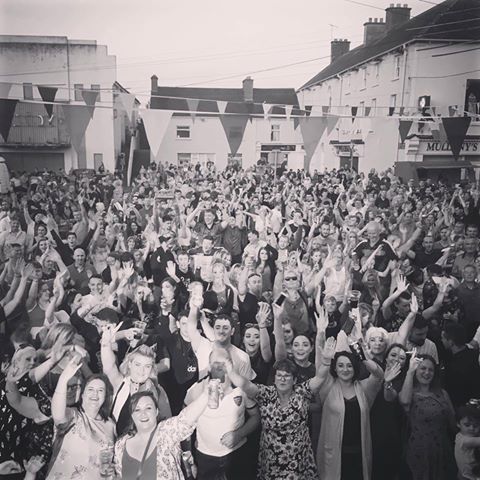 Gallery of photos by Michael Scully.