Slí na Sláinte (“Path to Health”) is a unique Health Promotion initiative of the Irish Heart Foundation designed to encourage people to walk for health and leisure by creating mapped measured walking routes in workplaces, communities and schools.

The Portlaoise Slí na Sláinte, funded under the Rural Recreation Infrastructural Programme from the Department of Rural & Community Development, promotes the use of mapped, signposted walks around the main urban walking routes used by the wider community to incorporate walking into their day.

When planning the routes every effort was made to ensure that the routes passed by Portlaoise schools and large workplaces to encourage participation.

The routes were launched at the Portlaoise Parish Centre. by Cllr Willie Aird, deputising for John King Cathaoirleach of Laois County Council. The unveiling of one of the new map boards was followed route 'roadtests' by local walkers and school groups from Gaelscoil Phortlaoise, Scoil Bhride & Portlaoise College. 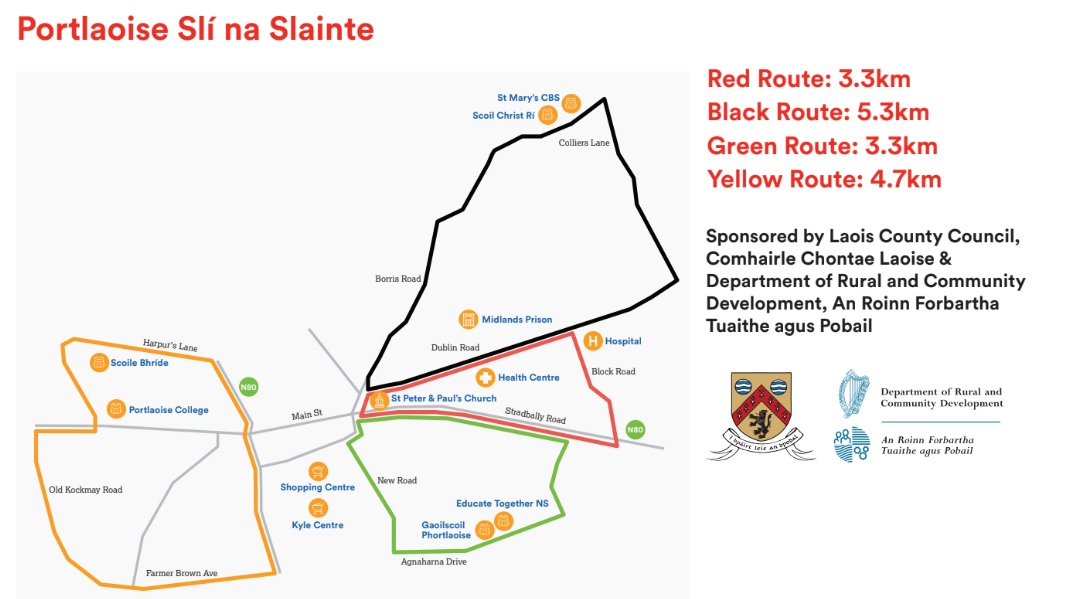 “We hope that the school pupils, workers and the local community in Portlaoise will get great enjoyment and benefit from their new Slí na Sláinte routes. Getting active makes such a big difference to your heart and overall health, helping to reduce stress, ease back pain and reduce the risk of heart disease. For heart health, adults need at least 30 minutes of physical activity, such as brisk walking, five days a week. Children and young people need at least 60 minutes of physical activity every day of the week. By having a clearly marked and safe walking route, we aim is to make it easier for people to include physical activity as part of their day,” she said.