A Laois school has five of the county's six stands at the 2019 BT Young Scientist and Technology exhibition this week in the RDS.

A study on the negative effects of Fortnite online game is just one of the projects by Heywood Community School.

Three transition year students, Ben Coss, Fionan Mahoney and James Whelan are investigating the effects that the online game has on the mood of players.

“Fortnite is one of the most popular and addictive games at the moment. When people aren’t playing it they are watching it, this desensitizes the brain to violence. Addicted people also lose out on other opportunities. We intend to survey individuals on whether or not playing Fortnite has a negative/ positive effect on their mood. We are also researching how mood is affected when regular players are prevented from playing,” the group say.

Second year student Koren Dunne's project in the Junior category is also topical, a study on the effects of changing to Daylight Saving Time on secondlevel students, involving surveys of first to third year s before and after the clocks went back.
“I investigated the effects of their eating habits and physical activity,”she esaid.

A keen athlete with Ballyroan Athletics club, Evan Hogg from 3rd Year has focused on exercise for his project, called Less is Better.
“The objective is to figure out which is more beneficial for student's performance in a bleep test; three 10 minute exercise periods a week or one 30 minute exercise period a week. I also hope to investigate the effects on the fitness and mental wellbeing of the participants,” he said.

Lastly, Luke Dowdall and Joey Moore both from fifth year, are investigating what influences plasma’s colour.
“Plasma is an ionised gas that changes colour based on what gas is used to make it. Plasma's colour is also influenced by the amount of energy running through it. Our project explores the influence of each of these factors on plasmas colour,” they explain.

In all Heywood has nine students exhibiting, and they will stay with their teachers in Dublin for the duration to avail of the social networking it offers.

Aodhagan O'Suilleabhan leads the science department at the school near Ballinakill in Laois.
“We are delighted to have five projects in this year, after having six last year,” he said.

There was a surge in interest in science at the school after they began holding SciFest school competitions in 2017.
“SciFest is accessible rather than elite, more students have taken an interest because of it. We brought our second years to SciFest Carlow and they picked up tips and started conversations for projects,” Mr O'Suilleabhan said.

Portlaoise College is also sending a project to the BT Young Scientist & Technology Exhibition. 'Does heading the ball in Football affect your memory and reaction speed?' is by Lee, Byron and Luke (pictured below with science teacher Ms Fox). 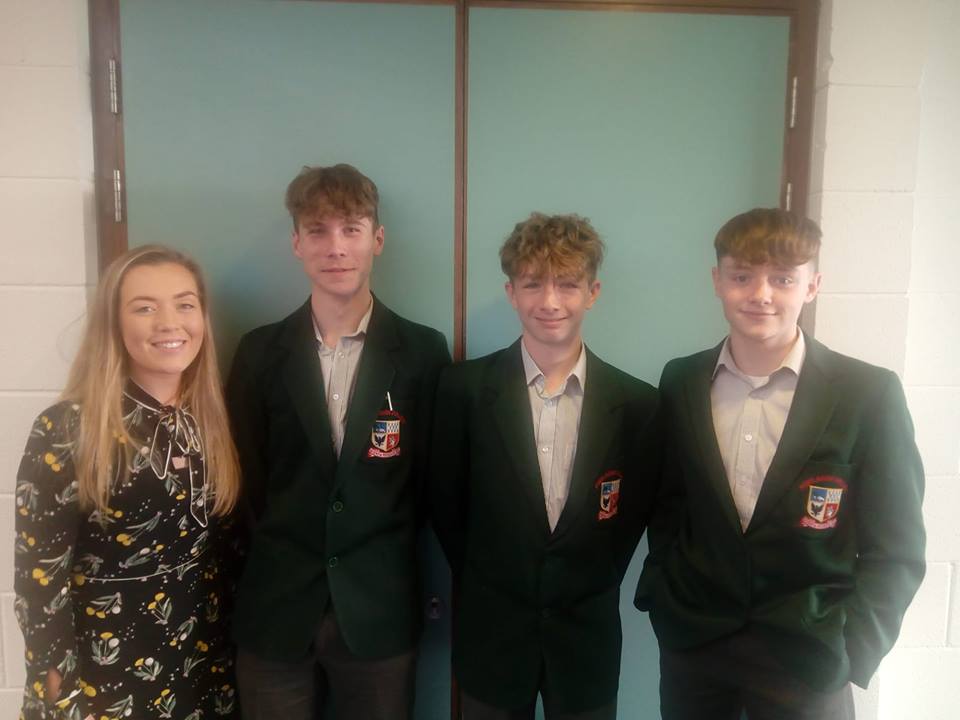 The exhibition opens in the RDS in Dublin this Wednesday January 9 and runs until Saturday 12.

Best of luck to all these talented young Laois scientists!