Citations and pictures from Awards supported by Supermac's

Outstanding achievements by young people in Laois and Offaly were celebrated in Portlaoise last weekend at the Laois Offaly Garda Youth Awards.

Anthony Idris is a Special Achievement Portlaoise District Award Winner. Nominated by Bolaji Adeyanju of Laois Africa Support Group, Anthony is a very talented sportsman who, when faced with adversity, rises to the challenge.
In 2019 Anthony took first place in the All Ireland Schools Track and Field finals. Only five days later following an accident Anthony unfortunately broke his neck fracturing his C4 and suffered swelling on his C5. Anthony was told by medical professionals he would never walk again.
Anthony, with his competitive nature, was determined to beat the odds. With lots of rehab and a strong mindset Anthony was back walking five months after his injury. He was back running within five months, and in true sportsman style Anthony was competing in his sport in January 2020, placing winning five events.
Anthony is also a talented dancer. In July 2021 Anthony established ‘Associated Dance Network and Co’ where he creates and choreographs music videos and live performances. Anthony is studying Sports Science with Mathematics in Nottingham Trent University. The future is bright for this determined man. 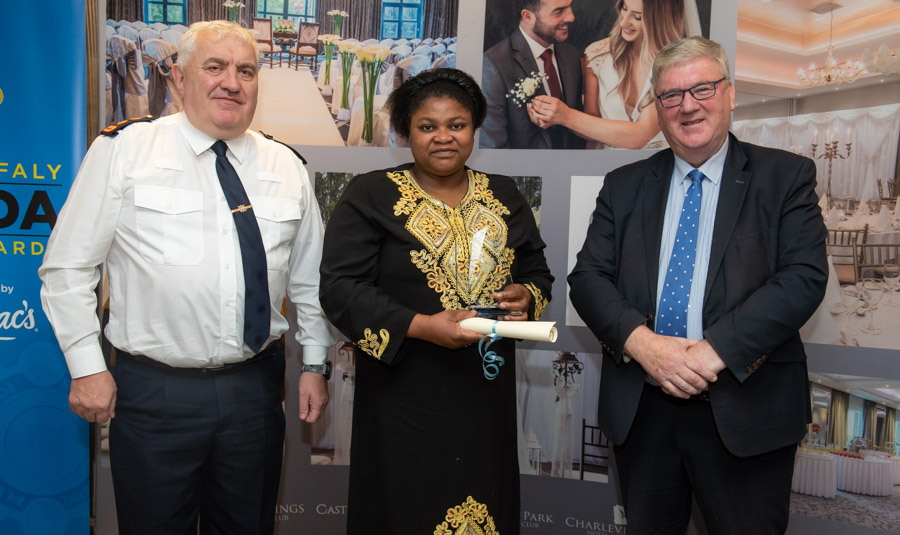 Oisin Byrne is a Portlaoise District Award winner who was nominated by Mr. Brian Stapleton of St. Mary’s Knockbeg College, Knockbeg.
Oisin was in sixth year at St. Mary’s, Knockbeg at the time of his nomination for a Garda Youth award. Oisin is a very active member of his local GAA club Arles- Killeen and has played football for his club, school and county at all grades.
Oisin displayed great entrepreneurial skills when he set up a GAA clothing business on Instagram in March 2020. The pandemic did not deter Oisin. If anything it spurred him on to ensure his business succeeded and that the charities in his community received funds to allow them to continue.
Oisin asked well known GAA players to donate sports gear as prizes for a raffle. All were very impressed with his compassion and gladly helped out.
Thanks to Oisin’s efforts, €1,000 each was raised for the Child and Adult Mental Health Services (CAMHS) and the Irish Cancer Society. Both organisations were both delighted and grateful for Oisin’s generous donation through his fundraising efforts.
His initiative is an excellent example of how we all have a positive impact on our community and how we can all be more aware and display a little empathy towards other people going through difficult times.
Oisin is studying business in DCU and has plans to run another charity event in the run up to Christmas. This time he wants to help the “well-being fund” set up by Monaghan Harps Club to support the team mates, friends and family of teenager Brendan Og Duffy who was killed in a car accident hours after captaining Monaghan in an U20 Ulster semi-final win. 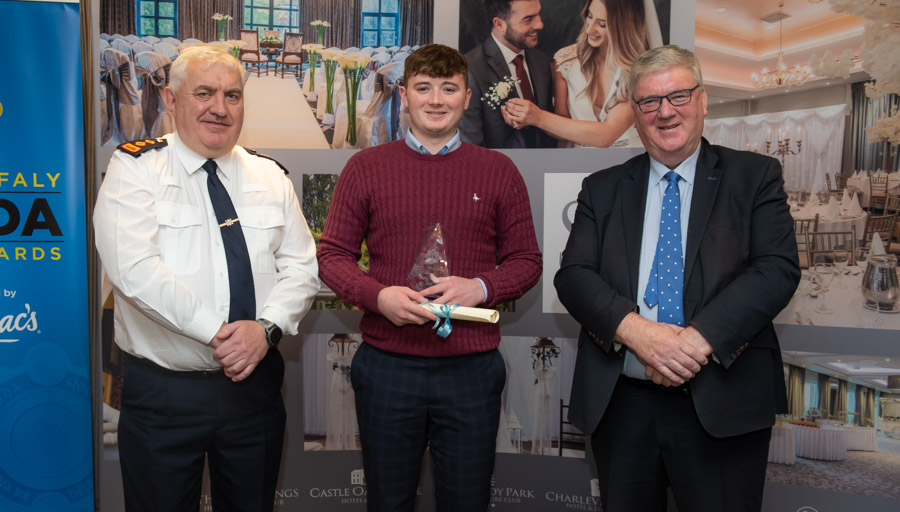 Seorsia Jack is an Individual Award, Portlaoise District Award Winner who was nominated by Bolaji Adeyanju of Laois Africa Support Group. Seorsia is a talented young solo artist with a bright future. In 2019 she won ‘X Factor the Band’ and was subsequently signed to Syco records. Her music has streamed 300,000 times on Spotify. Seorsia is recording in a studio in the UK.
She overcame Covid19 restrictions by doing live video performances funded by Laois County Council to help promote up and coming artists.

Seorisa also has a passion for social justice. Her social media racism awareness videos have reached over 10,000 people.
This all makes Seorsia a great role model for her generation and local community and she is sure to have a bright future.
The Coiste Cinnealtais at Scoil Chríost Rí in Portlaoise is the Voluntary Group Award recipient. 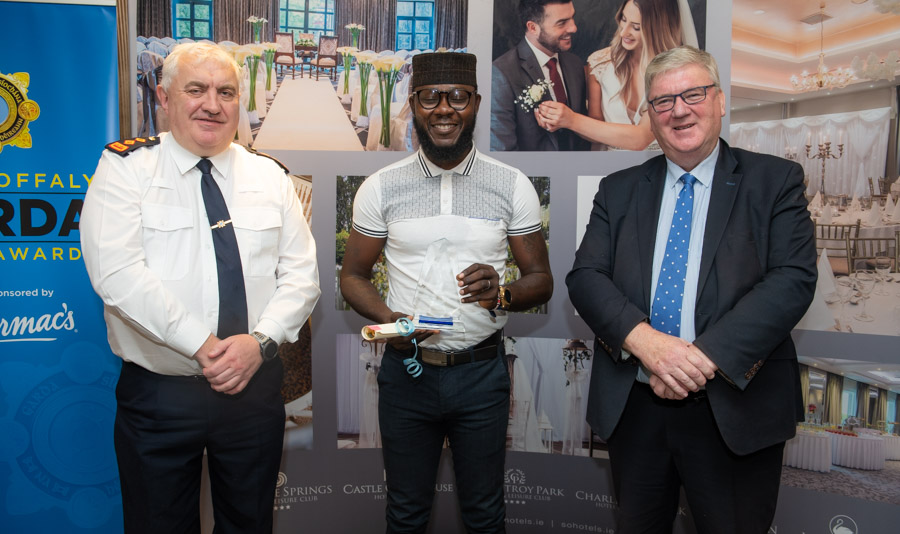 The Coiste Cinnealtais or ‘Kindness Committee’ was nominated by their teacher Edel Griffin.
Established in 2019, the main aim of the Kindness Committee was to get new toys for local children. The simple idea soon became complex, but the girls rose to the challenge. One parent was even roped into making a coin collection box which yielded an impressive return of €1,000.
With Covid-19, the girls made good use of their social media skills. They set up an Instagram page called ‘hope and kindness’ and used it to create awareness and fundraise. By the end of the campaign the girls had raised over €3500 in cash and over 500 brand new toys had been donated.
The toys and vouchers were donated to various locations, including the direct provision centres in Abbeyleix and Portarlington, Portlaoise Action to Homelessness, the Society of St. Vincent de Paul, the Amber Refuge Kilkenny, Laois Domestic Abuse Services, Scoil Bhride as well as the Kolbe Centre Portlaoise.
The girls were passionate, motivated and driven in their cause. What started as an initiative to help others quickly grew into a more profound experience for all involved, as each person discovered the joy of giving to others.
The girls spoke about their experiences whilst distributing the donations from the ‘moms who cried’ to the ‘Christmas blankets and hot water bottles’.
Another poignant story as told by the girls was their experience with a man who had promised his child a trip to the toy store but could no longer afford it. The girls responded by raising funds for a voucher.
This is a great example of what can be achieved when a group of people come together with drive and commitment. They should be very proud of what they achieved, well done to all involved.

Grainne Malone is a Birr District Award winner who was nominated by her teacher Kathleen Gleeson of Banagher College.
Grainne’s teacher describes her as hard working, responsible and mature beyond her years. When Grainne was in Transition Year she organised weekly visits to the local nursing home for a group of her peers. Both students and residents thoroughly enjoyed and gained from this experience.
Grainne excelled as Chairperson of the student council. She organised a World Down Syndrome day fundraiser which is now an annual school event.
She is devoted to the planet and was a key member of the Green School committee. She worked with an Athlone firm to create a product to reduce waste in the school. She also represented Offaly in the National Youth Assembly in Climate change. She has also worked with the organisation Afri and was asked to speak at their virtual famine talk about Climate Change.
Grainne, through her work with Comhairle na nOg, helped produce a video on exam stress. She also worked on the National Executive on a Gender Equality and Women’s Rights policy to be adopted by Offaly County Council.
Grainne has done many other things which show her work ethic but her greatest gift is her goodness, caring nature and moral compass. Grainne enriches people’s lives.
Grainne is studying BioMedical Science in college in America. Her sister Aislish Malone was present to receive the award on her behalf. Well done Grainne. 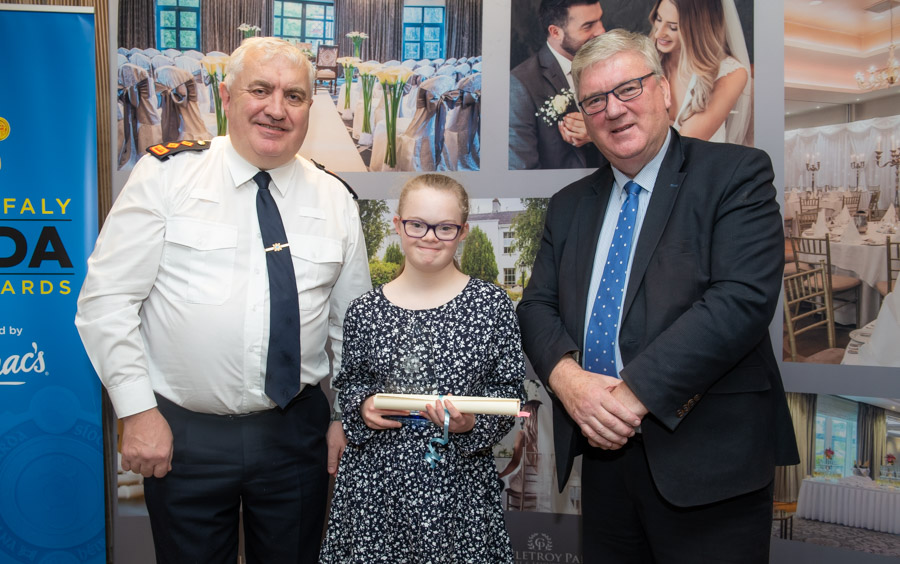 James Saunders, is the Tullamore Garda District Special Achievement Award winner who was nominated by Ann McNamara, a teacher at Tullamore College. In 2019 James was involved in a terrible traffic accident which resulted in life changing injuries.
From just outside Killeigh, James spent nine months in Temple Street Hospital followed by three months at the National Rehabilitation Centre.
James is a truly inspirational young man, he has taught both staff and students in his school community how a person can triumph over adversity through hard work, sheer determination and a positive attitude. James is a person who is always in good humour, he is well known for his quick wit and loves to make a joke to lighten a conversation. His positivity is infectious.
James is a hard-working and intelligent student, he is always quick to lead class discussions and voice his opinion on any academic topic or subject. He shows leadership skills beyond his years and a spirit which is impossible to defeat or subdue.
James is an exceptional young hero. He has true courage, his fighting spirit has shown us that nothing is impossible when we have the courage and determination to face our challenges head on. James is inspired by Mohammed Ali’s quote: “If my mind can conceive it, and my heart can believe it - then I can achieve it.”
His indomitable spirit is an inspiration to his teachers and his fellow students. In school James likes to be known as James (as in Bond) and his assistant is now known as Miss Moneypenny. 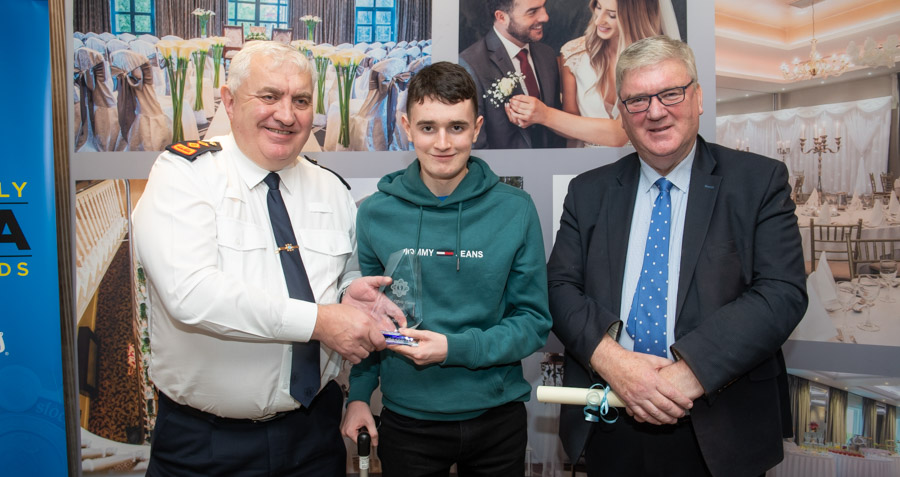