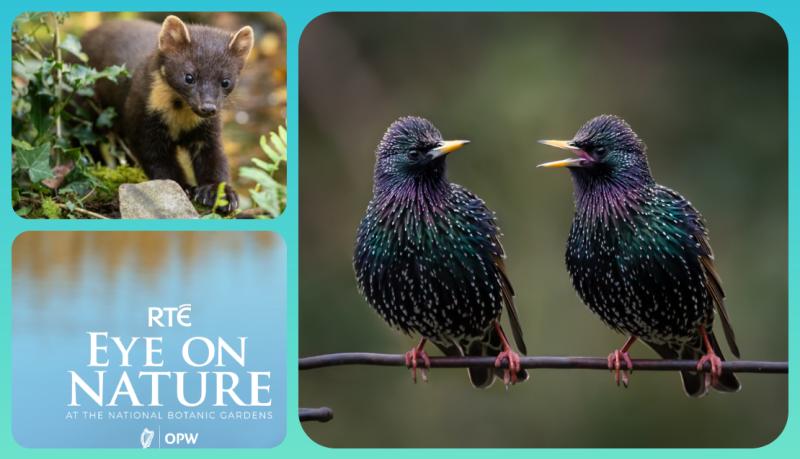 Two Laois amateur photographers have been recognised in RTÉ Eye on Nature Photography Competition while an image of a rare red squirrel in Laois has made it to the final.

This year’s competition was launched in January 2022 on Mooney Goes Wild on RTÉ Radio 1 and Today on RTÉ One and celebrates the flora and fauna of our island. It received an overwhelming response with more than 3,000 entries.

Out of these 100 pictures were selected with 12 finalists picked and eight Merit Board Runners-up chose.

There were two Laois Merit Board winners. David O’ Brien from Ballyfin won for his picture of a Pine Marten. Pictured below.

Two starlings were captured on camera by Derek Griffin from Portarlington. PICTURED BELOW.

The red squirrel (Iora rua, Sciurus vulgaris) was snapped by Wexford man Declan Roche in Ballyfin, where farmer and wildlife enthusiast Richard Duff has created a nature reserve with hides so visiting photographers can get up close with nature.

Derek Mooney said:  "Most of us only ever catch a fleeting glimpse of wildlife. The beauty of these twelve finalists’ photographs is that they enable us to enjoy that moment over and over."

The 12 finalists and the three judges will be interviewed on Monday 25 April, on Mooney Goes Wild on RTÉ Radio 1. Find out how they got their perfect 'shot', the type of camera they used, the time of day they took the picture, and how much effort went into capturing the image of their chosen subject.

On Wednesday’s Today show, 27 April, Derek Mooney will be in the National Botanic Gardens of Ireland along with the 12 finalists.  Viewers will see the images displayed in the gardens. The winner will be announced live during that show and the winning photographer will be presented with the Eye on Nature trophy and a prize of €1,000.

In the coming months, the exhibition will travel to other Office of Public Works sites across the country.

Tune in to Today this afternoon to hear more about the online gallery of finalists and runners up.  The overall winner of the photography competition will be announced on next Wednesday’s show.