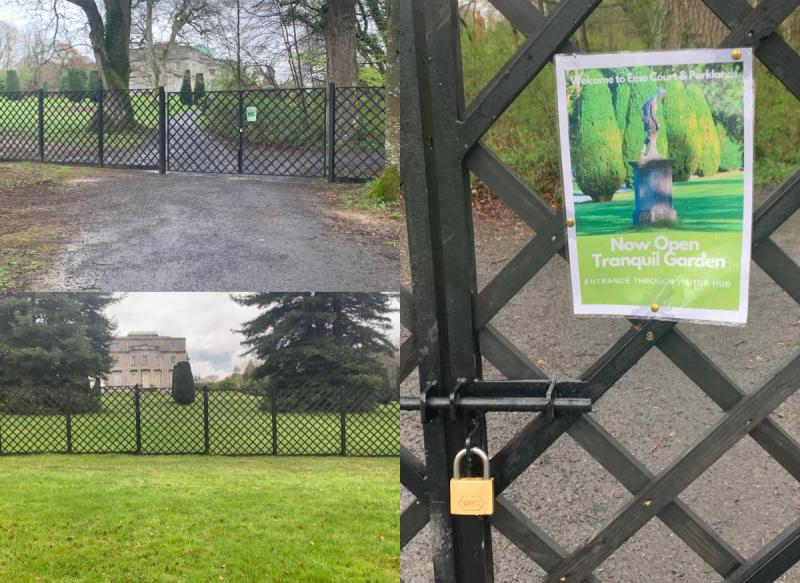 Concerns that a public charge is on the way for walkers in Emo Court have been addressed by the Office of Public Works, in response to a Laois councillor.

A Portlaoise councillor says she has received assurance from the OPW this Monday, April 25 that no charges are planned for the parklands, gifted to the public by its late owner.

Recently erected black timber fencing at Emo Court, cutting off the rear of the house, caused concerns for visitors about potential charges being applied for entry to Emo Court, with a petition underway against such charges.

Fine Gael Cllr Thomasina Connell from the Portlaoise Municipal District has claimed that the OPW has now told her there are no charges now or in the future.

“The OPW have today confirmed to me, via the office of the Minister who has responsibility for the Office of Public Works, Patrick O’ Donovan T.D. that no charge will be applied and access to Emo Court will remain free of charge. Neitehr are there any future plans to introduce a charge.”

“I am delighted to receive this confirmation from the OPW, that access to Emo Court will remain free to all who use it. People come from far and wide to use this beautiful public amenity and I am pleased that the position with regard to free accesswill remain unchanged.

Laois town to get ‘enhanced mobility and permeability

“Emo Court is a beautiful place, entrenched in Laois History and where so many people enjoy the woodland walks and extensive parklands on a daily basis," Cllr Connell said.

She said the OPW gave her details as follows.

“The fence improves the security of the house and enhances the visit for people who wish to relax and not be intruded upon by joggers, ball games, dogs etc. This measure also allows improved control of access to the Tranquil Gardens where we will be hosting intimate events such as music performances, poetry recitals, drama, lectures and such like in future.

“I anticipate that a meeting will be arranged with the Head of Heritage Services to provide a full account of the works to be undertaken in order to allay the concerns of our community and hopefully we will have further detail on the proposed future works shortly.