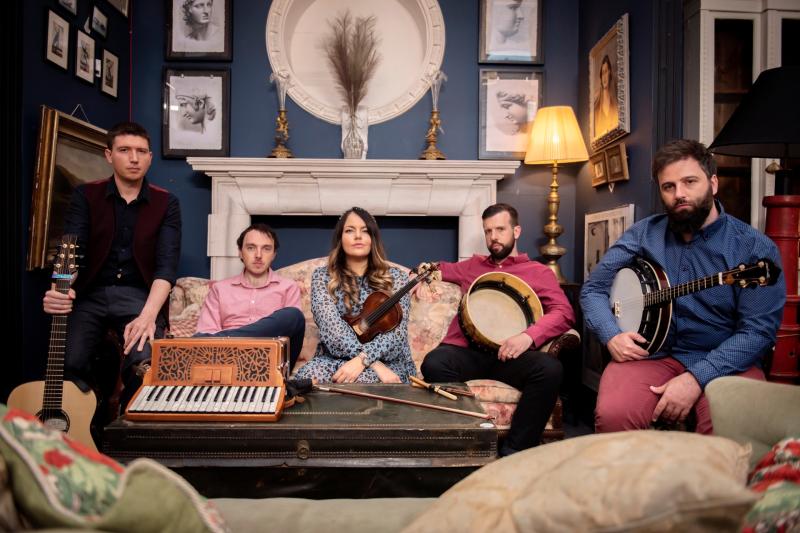 A roof raising night of brilliant Trad music is promised on Sunday May 29 at the Dunmaise Arts Centre in Portlaoise when Goitse, make a welcome return after another successful tour in America.

"We are launching our 6th studio album, Rosc, which marks over 10 years of touring as a group. It has been over two years in the making and we just can't wait to get it out into the world for everyone to hear" says percussionist Colm Phelan. MORE BELOW.

The band is highly respected on the Trad scene, evidenced by the star studded line up of guest musicians on Rosc. Padraig Rynne, Sean Óg Graham, Martin Brunsden, Aoife Scott, Colm McClean and Daniel Collins  collaborate with Goitse  on Rosc and some will be  special guests at Dunamaise. Also guesting as support are local group Sásta; Ruaidhrí Tierney, Dale McKay and David Harte

Only interrupted by the Covid pandemic, Goitse, the multi-award-winning quintet, have been maintaining a year round touring schedule since 2011 throughout Ireland, the UK, Germany, France and the United States.Two Laois based musicians are founding members of the group.  Colm Phelan is a multiple All Ireland and World bodhrán champion and Áine Mc Geeney fiddle & vocalist who has been awarded ‘Female Vocalist of the Year’ and ‘Composer of the Year’ on two separate occasions by the ASLR celtic music awards.

"I think for both Colm and myself it is always great to play in Laois. We both teach locally in Comhaltas branches when we are not touring and it is always great to see so many friends, family and fellow musicians in the audience. Although it does make for a nerve wracking night for us sometimes" jokes Áine.

Their previous CD, Úr, was named Traditional Album of the Year in the ASLR Celtic Music Awards and their new album promises to be another hit. ‘Rosc’ contains a mix of Irish and English songs along with newly composed music from band members, subtly intertwined with old traditional melodies.

So lace up your dancing shoes for another night of toe tapping energic music from Goitse.

Tickets available from the Dunamaise theatre or www.goitse.ie