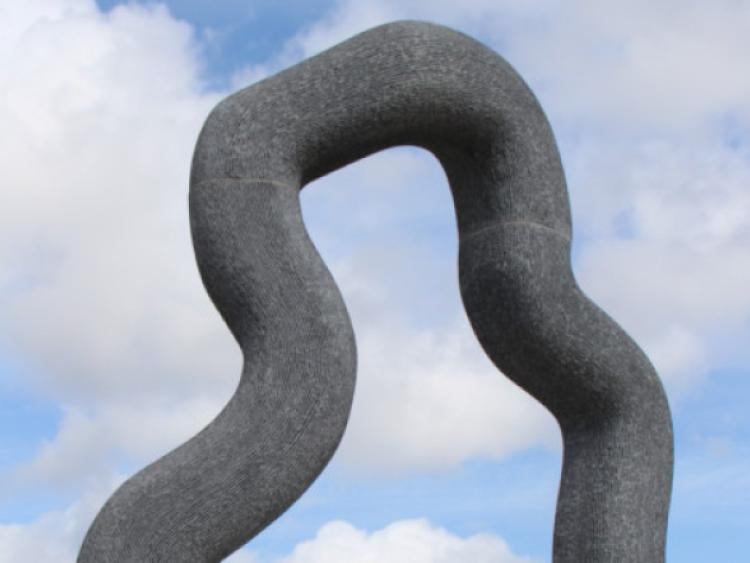 A NEW public artwork for the M7M8 motorway was recently unveiled and can now be seen by motorists as they drive beyond Portlaoise.

A NEW public artwork for the M7M8 motorway was recently unveiled and can now be seen by motorists as they drive beyond Portlaoise.

The newly installed artwork ‘Flow’ by artist Eileen MacDonagh at Clonkeen, Portlaoise was provided under the Per Cent for Art Scheme in association with the M7 Portlaoise - Castletown/M8 Portlaoise - Cullahill PPP Motorway Scheme.

This was led by Laois County Council, under the auspices of the National Roads Authority. With a total budget of €55,000, the project included artists fees, design development, fabrication, supply, foundations and installation and landscaping works, artists insurance, health and safety costs, VAT, and all other expenses.

Following a two stage open competition the art project was awarded to well established artist Eileen MacDonagh who is based in Athy in Kildare. The vision for this project was to commission an original and permanent artwork that reflects contemporary art practice and responds to the locale.

‘Flow’ takes its inspiration from the aerial view of the River Nore as it twists and turns and meanders its way through the local landscape.

The sculpture is three metres high and 2.8 metres wide and is carved in limestone from Three Castles, Co Kilkenny, where coincidently the River Nore flows too. It was made in McKeons stone yard in Stradbally.

Eileen MacDonagh was born in Sligo and has worked as a sculptor since the early 1980s.

Her work has featured in many exhibitions, both in Ireland and abroad, including shows in Portugal, Scotland, India and Japan. Eileen has both organised and participated in many International symposia; her work is included in numerous collections, such as the OPW, Kilkenny and Cork County Councils, Marlay Park, Dublin and Tawara Newtown, Osaka, Japan.

McDonagh works mainly in stone to produce fascinating large scale sculptures. Due to the size of her work, she has tended to concentrate on public commissions rather than exhibiting in the context of the gallery.

Her first solo exhibition, Truss in 1992, showed works made from both wood and stone and garnered great reviews for the artist. This enabled McDonagh to make a name for herself as a sculptor capable of taking on large scale projects, and she has built up an astounding body of public art. Her pieces can be seen in Waterford, Tullamore, and Cork, as well as in Germany, Luxembourg and Japan.

In her Carlow exhibition MacDonagh echoed her Medusa Tree (2009) which sits in the forecourt of Carlow’s GB Shaw. She created a forest of 8 metre high trees, taking on the scale the Main Gallery, the largest white gallery space in the country. Alongside this installation other works also illustrated the breadth of her career to date.