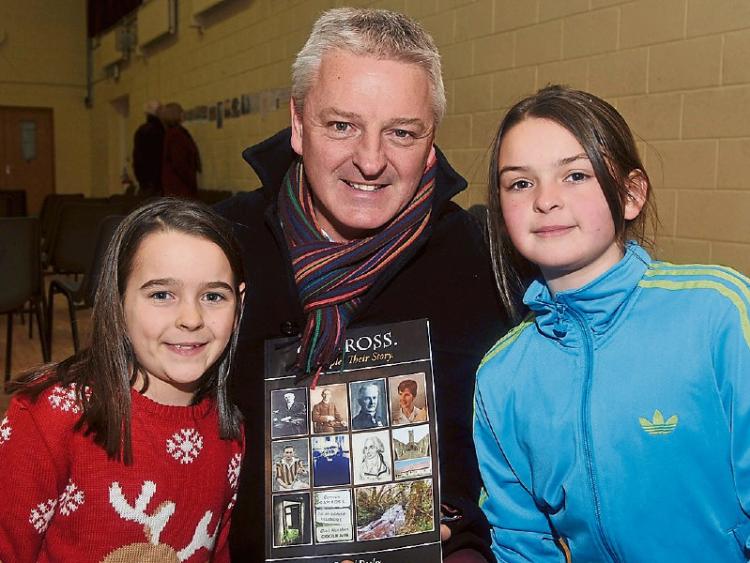 Camross Hall was built in 1952 and that building has seen many a memorable gathering, most notably when the local branch of the Irish Country Women's Association welcomed back Fint Lalor and the Camross senior hurlers with the Bob O’Keeffe Cup for the first time in 1959.

That same Fint Lalor is one of the great personalities to appear on the front cover of Ger Dooley’s wonderful new publication entitled “Camross her People, Their Story”. The book was officially launched in Camross Community centre on last Saturday night before a packed and appreciative audience.

Like many facets of the book and revelations the Hall has changed from its humble state and today the Parish boasts of a wonderful Community centre capable of hosting hundreds of people. On Saturday people from all walks of life came to see and purchase the most researched history of the Parish ever undertaken.

The author Ger Dooley is the youngest son of Paddy and Ann and he did not have to go too far for information of the ICA or the GAA. His father Paddy was employed in the ESB for many years and holds All-Ireland inter firms medals won with the Portlaoise branch in the sixties and, along with his brother Pierce, helped Camross win the O’Keeffe Cup in 1963/5/6/7. Pierce then won a Cork County medal with UCC In the late 1960s

Ann (nee) Lalor from Cloncully has been part of the ICA for many years and Ger's grandfather Michael was well known for his knowledge of Irish Civil war politics and another uncle of Ger's, Michael was Principal Teacher on the far side of the Slieve Bloom Mountains and was actively immersed in the history and life in general in the scenic Slieve Blooms.

Paddy too would have a great knowledge of going on’s in the Local branch of NFA as it was known in olden days but of course nowadays it’s the IFA.

The evening commenced with a mulled wine and cheese reception, then there was tea, sandwiches and hot deli for everyone in the audience.

Two friends of Ger,s from Tallaght in Dublin then entertained the audience with some rousing ballads with a rebel flavour and then gave a rousing version of a ditty entitled “the Camross Rose.” She may not be as well known as the other Black and Amber Rose down Mooncoin way but she might become popular after Saturday.

The song is inspired by poetry by a very famous Camross man Patrick Ryan of many centuries ago and he gets a mention in the book. The book was launched by historian John Feehan who described the book as a classic and the work of a very dedicated man.

Next week we will review the book in these pages but for now if you need a Christmas gift that will last for years then, this is for you. It is fitting that, as we listen to hundreds of versions of “White Christmas” from the film of the same name that this book reveals a startling fact - that Bing Crosby's ancestors hailed from Camross.

Just one of the nuggets of information from this gem of knowledge.