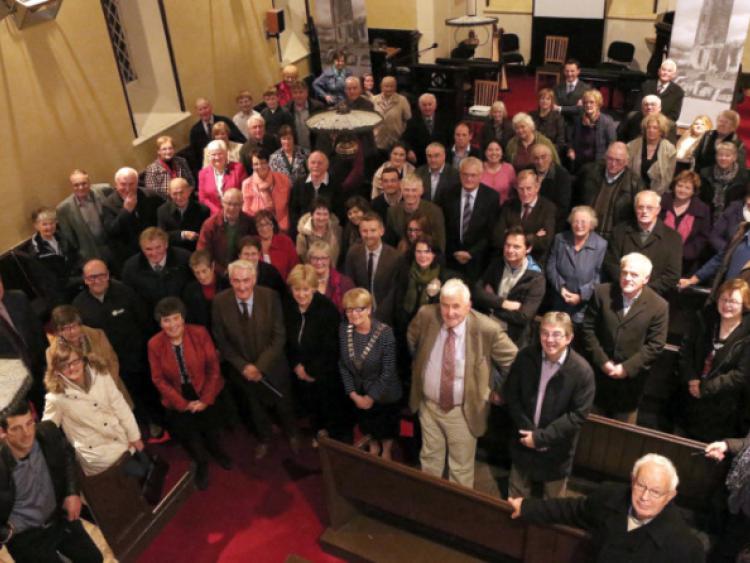 THE Night of the Big Wind on January 6, 1839---and a function in The Holy Trinity Church at The Rock of Dunamaise 175 years later. The connection?

THE Night of the Big Wind on January 6, 1839---and a function in The Holy Trinity Church at The Rock of Dunamaise 175 years later. The connection?

Well, the Big Wind, with hurricane gusts of up to 100 knots, badly damaged the Dysart-Enos Church near Ratheniska--so much so that that the Church of Ireland authorities decreed its abandonment.

Build a new structure, they ordered. And so arose The Holy Trinity Church at The Rock. Designed by Joseph Welland, architect to the delightfully named Board of First Fruits, it was completed in 1844.

Interestingly, a memorial plaque to Captain William Perceval of Stradbally, who died aged 38 in September 1793, was transferred from the old church to the new and is still in pristine condition. He was in HIs Majesty’s 103rd Regiment of Foot.

The function in The Holy Trinity Church took place last Tuesday night (October 21). Its purpose was the launch of a conservation report on the Dysart-Enos Church. Arts, Heritage and Galetacht Minister Heather Humphreys did the honours.

Yes, the old Dysart-Enos Church and graveyard are still there, in a spectaculr setting atop a hill, complete with mausoleum, burial vaults and headstones dating back centuries.

Though, surprisingly, still largely intact, the building is slowly but surely disintegrating as masonry tumbles from the tower and nave walls.

To the rescue has come the Dysart-Enos Old Church and Graveyard Conservation Committee, largely made up of Ratheniska people and chaired by former Co Councillor and heritage activist James Deegan.

It was they who commissioned the conservation report. Laois Partnership, headed by CEO Anne Goodwin, footed the bill. Conservation Architect Richard McLoughlin prepared the comprehensive report.

Next step is to use the report to seek European Rural Development Programme funds, due to be announced in early 2015, for the preservation of Dysart-Enos.

James Deegan stressed: “Time, however, is not on its side and if we are to conserve this ancient landmark we need to be successful in our quest for funding in the not too distant future.” He added: “I am very hopeful we will not be disappointed.”

When Dysart-Enos Church was vacated in 1839 or the early 1840s, it brought an end to a millennium of worship on the site.

According to arhitect Richard McLoughlin, St Aengus established a hermitage at Dysart-Enos. Believed to have been born at Clonenagh near Mountrath, he died in 830.

How old is the current Dysart-Enos Church? Mr McLoughlin is not certain, but he thinks the tower dates from sometime in the 1600s. Extensive repairs were done in the 1700s, he says, which indicates that the entire building was erected at an earlier period.

Happily, The Holy Trinity Church at The Rock, now part of the Portlaoise and Ballyfin Union of Parishes, is still in use and recently celebrated its Harvest Festival. It, too, is in a picture-postcard setting.

Congregation members Audrey Houlihan, Jean and Isaac Dobson, and Heather and Brian Frarey warmly welcomed the large attendance to the launch function. Sean Moran, on the violin, and his brother Cillian, on the harp, filled the church with beautiful music.

Present, too, were The Dysart-Enos old Church and Graveyard Conservation Committee. Its Vice-Chairperson is Arthur Drennan; Secretary is Dr Kate Ramsbottom; Liam Wall is Treasurer and Mary Rankin is PRO.

They, so to speak, are still defying The Big Wind.