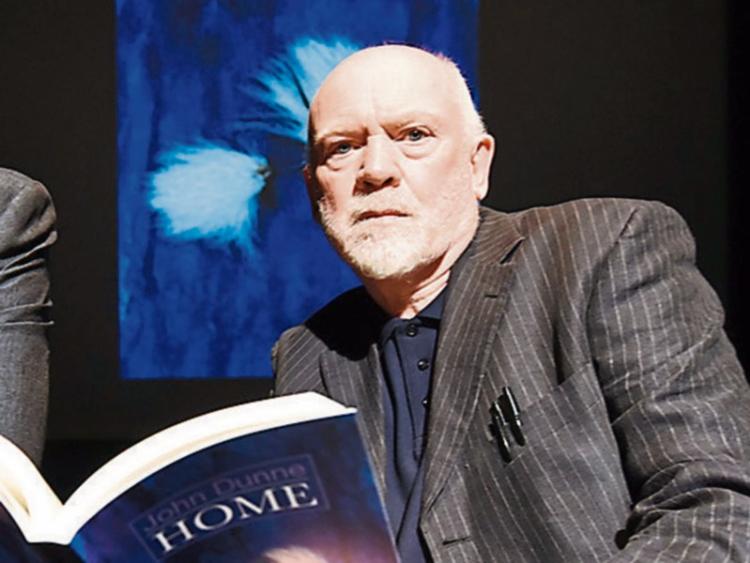 John Dunne dedicated the launch of his book ‘Home’ in the Dunamaise Arts Centre, Portlaoise, last Tuesday night, to the memory of his cousin, Peter Dunne, who had died the previous Sunday, April 17.

Peter’s family insisted that the function should go ahead. His daughter, Claire, told John: “The show must go on. If you don’t, he will be giving out to you.”

Indeed, Peter was probably there in spirit. Living at Rockdale on the Mountrath Road and reared in Clonrooske House at Ballyfin Road, he was the soul of many a party.

‘Home’, a mixture of fact and fiction, is essentially John Dunne’s tribute to his native place. “I have a fierce love of the town,” he told the large gathering at the launch ceremony.

A retired teacher, he grew up in Coote Street and from an early age was involved in the music scene. With his then abundant locks and devotion to Bob Dylan, he wasn’t the typical person to be found at the head of a classroom.

John just moved down the Mounmellick Road, to Woodlawn, to set up his family home, where he and his wife Denise, a gifted poet, raised four children, Neil, Gary, Aoife and John.

An accomplished short story writer, John Dunne published ‘Purtock,’ a novel, in 1992. Today, he has a large on-line following for his websites featuring pictures and articles on Portlaoise.

Before the speeches, many of those pictures, with relevant soundtracks, were shown on a large screen in the Dunamaise theatre and drew appreciative and nostalgic comments from the attendance.

Among the attendance was Michael Earley of Stradbally Road and he saw his young self on screen—as a member of the famous Odlum’s Mill tug-o’-war team of the 1960s/70s.

Present, too, was Billy Aird, representing one of Portlaoise’s great old families. Writers were there aplenty, poets Arthur Broomfield and Pat Boran (who launched the new book), dramatist Frances Harney, and Edward Deevy, author of the fascinating autobiography, ‘Searching for the Promised Land.’

Also there were many of John’s contemporaries--Timmy Sinnott, for example, who recalled: “I played in the CBS band with John.”

John said ‘Home’ was a totally local product --written, designed, printed, launched and sold by local people. He thanked all who had helped with the venture.