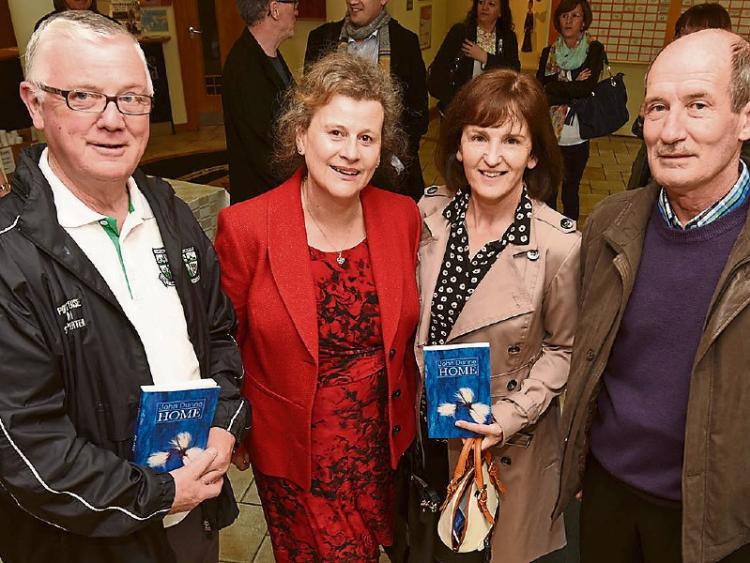 “He takes the traditional form of local history and gives it a boot in the arse,” declared poet Pat Boran in the Dunamaise Arts Centre in Portlaoise last Tuesday evening. He was launching John Dunne’s book, ‘Home.’

“’Home’ is an attempt to take on one of the biggest subjects of all,” contended Pat. “Not one for being tied to the conventional, John starts off by breaking the rule and giving us two books in a single volume. Determined to have its cake and eat it too. ‘Home’ is both fiction and non-fiction, both a lovingly compiled piece of research into the author’s place of birth, and an imaginative exploration of that place through the eyes of a variety of fictional characters.”

Pat continued: “’Home’ is, of course, a homage to the town of Portlaoise, a heightening of senses for the overlooked and under-appreciated. If not a hagiography, or an idolising of certain historical characters---though Alo Donegan should end up getting his own shrine in the Market Square—but it is an effort to honour them and set them in a quasi-historical context.

“John Dunne has long been a Joyce scholar and one of the best things in this book is that essay on the links between Joyce’s masterpiece (‘Ulysses’) and the Queen’s County. At some point, even for a writer like Joyce who went to great pains to recreate the map of his home town from abroad, it was necessary to trust in his imagination, to follow his imagined citizens wherever they might lead.

“In that respect, the stories in the first part of ‘Home’ follow a variety of emotionally challenged, even disturbed, characters into memories and experiences that have marked them forever. The most interesting and successfully realised characters are those who exist—even in a small town world—at the margins of its conscience.”

Pat went one: “’Home’ is also a book with a good deal of anger in it. There’s a distinct Gothic atmosphere and a dominance of central characters who seem to have reached the end of their tethers, characters who might at any moment take to the sky absolved of their moral torments, or jump, or threaten or pretend to jump, to their demise.

“John’s obsession with music animates many stories and adds depth to many characters, a snatch of song gives them a suddenly three dimension past.”

Pat concluded: “But there’s a real challenge in writing a book like this, in making something that is both original and, at the same time, reflects the place people know and care about. John Dunne get around the problem of balancing truth and fiction, or of being original and good, in a novel way. The second half of ‘Home’ is factual but fragmentary, the first half is fictional but emotionally true. Between them they make up an unusually rounded, engaging and fascinating portrait of an Irish midland town that takes the often lifeless approach to local history and turns it on its head.”