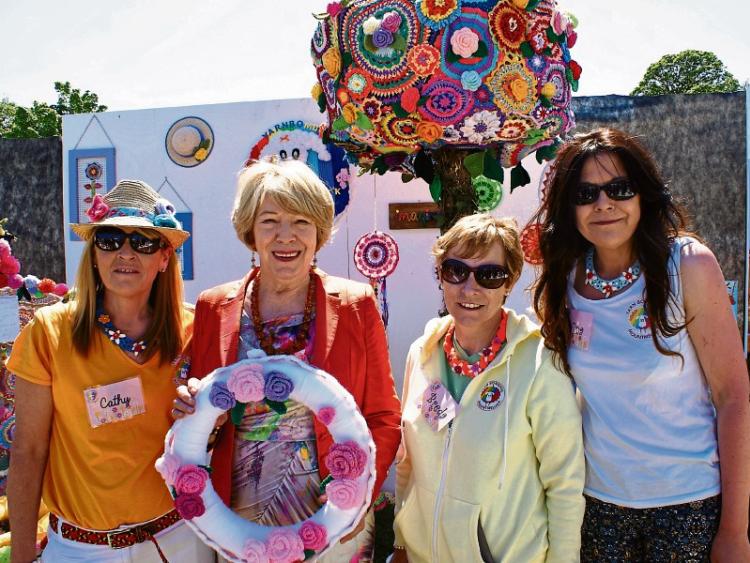 There were colourful celebrations in the sun for Mountmellick Yarnbombers last weeked after being commended for their 'Mandala' garden at the Bloom Garden Festival.

Thousands visited their display at the event in the Phoenix Park which welcomed 100,000 visitors.

President Higgins and his wife Sabina and RTÉ's Marty Morrissey, were among the many admirers at Mountmellick Yarnbombers colourful 'Mandala Garden' which featured a handmade tree and a hanging seat as centrepieces.

“Mrs Higgins said it was amazing. We were delighted to present her with a wool wreath made by Nora Grant, in the hopes we would be meeting her. It was a real honour to meet President Higgins,” said member Nina Horan.

The yarnbombing group was invited by Bloom to enter a Postcard Garden .

With over twenty ladies talented in crochet and knitting, they worked since last February on their creations, all based around a 'Mandala' which means circle in Sanskrit, symbolising unity and femininity, as well as being a crochet shape.

“We are totally over the moon, delighted at putting Mountmellick, back on the map, with our rich history in textiles. Many of our visitors were once boarders in St Mary's College, and a lot had heard of Mountmellick Embroidery. They all had fond memories of the town. We had a crowd the whole time, and all they wanted to do was go up and touch the work because it is so tactile,” said member Nina Horan.

Such is the interest in their work that the ladies are now going to start taking orders, with dreamcatchers proving hugely popular.

Look out for their next 'yarnbombing' of Mountmellick this September.

“We welcome new members, male and female, all levels of skill,” said Nina.

Meanwhile, Portarling resident Brian Burke won a prestigous Silver Medal for his garden, ‘GOAL’s Damascus Courtyard – War and Peace. It symbolised the displacement of Syrian families through five years of war. It will now be rebuilt in the Refugee Reception Centre in Monasterevin.

Winner of last year’s RTÉ Super Garden, it the second medal at Bloom for the designer, a Kildare native.