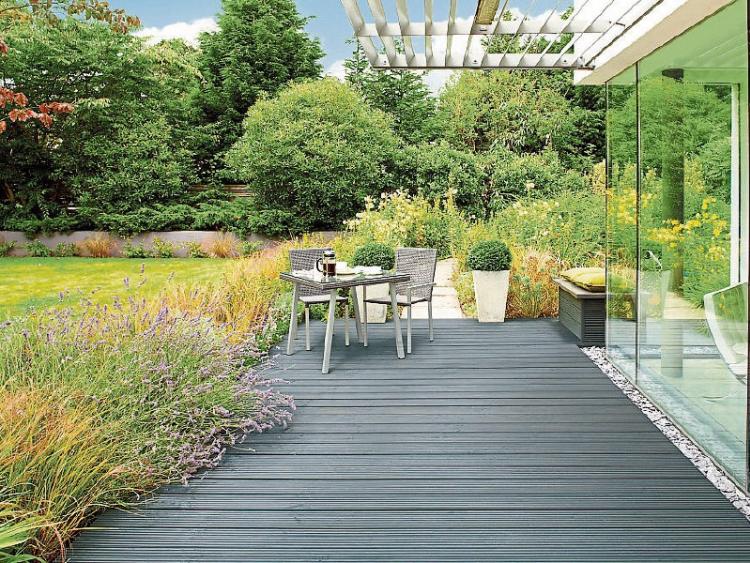 The poor, unfortunate, much maligned deck. It is customary to chastise it mercilessly in a time honoured tradition stretching back as far as 2004 when it made its triumphant appearance in Ireland.

It promised so much, for ten minutes it looked so cool and made us feel all Scandinavian.

Then the relentless damp of November arrived and the beloved deck metamorphosised into a malevolent monster that would inflict unspeakable GBH without so much as a by your leave.

The bi-polar outdoor surface treatment. As if life wasn’t complicated enough back then. The backlash wasn’t long about starting; deathtrap was the description routinely used. Between the trampoline and the deck you were taking your life in your hands walking out the back door. You’d be safer taking an evening stroll in the South Bronx. And the poor deck has been on the ropes ever since.

Well, demented as it may seem I’m here to proclaim that we need to give our decks another chance. What decking needs is an advocate, someone who will attempt to undo a decade of bad press. Even though, strictly speaking, the fault lay primarily with poor installation it’s still sorry and is cowering in the corner craving forgiveness and a fresh start. Can we find it in our hearts to let decking back into our lives?

I’ve been exposed to levels of deck related trauma you wouldn’t believe so this time round there are going to be some ground rules:

· Don’t let a friend of a friend of your butcher who once spent an afternoon watching Discovery Shed have a crack at it. It will be sagging and pooling water within a week.

· 4 x 2s are not joists. They never have been and never will be.

· Screw it. Blasting it together in 15 minutes with a Paslode nailer using interior 50mm nails won’t do.

· If you see anyone even contemplating using grooved boards, stage an intervention. Much like stopping a friend texting an ex, they might not want to hear it but believe me in the cold light of day they won’t be able to thank you enough. No good has ever come of a grooved deck board.

· Unless there is a genuine safety issue do not , I repeat do not, put a handrail and balustrading around it. One of the few sights in life which can make me cry is that of the square (12’x12’) ground level deck in the middle of the half acre back garden circumnavigated with 1 metre high handrail. Unless you’re going to use it to train a sheepdog don’t do it.

· 28 nails through the rim joist will not securely hold a post that you couldn’t be bothered concreting into the ground.

· Support the joists at mid span.

Decking is sorry for all the dislocated elbows and sprained ankles. It’s done its time, it’s rehabilitated and ready to be reintegrated into society. We’re back on the road again. What goes better with renewed prosperity than a nice bit of decking?

Only this time it will be different, our lessons have been harshly learned. This time we know enough to co- opt all we’ve seen on PBS America and make decks the features they are meant to be and not the sad, sorry, depressing ground level platform we have a history of somehow conspiring to make them. A heap of pallets could do that for us. This time we know enough to give Podge Landscaping a wide berth.

Let’s channel Savannah, Georgia; raised wraparound decks, porches, enclosures, pergolas, arbors. The neatly stacked rows of treated timber are all down there in the builder’s yard, biding their time.

We’ve changed, they’ve changed. We’re all grown up now. This time it will be beautiful; whadda ya say folks?