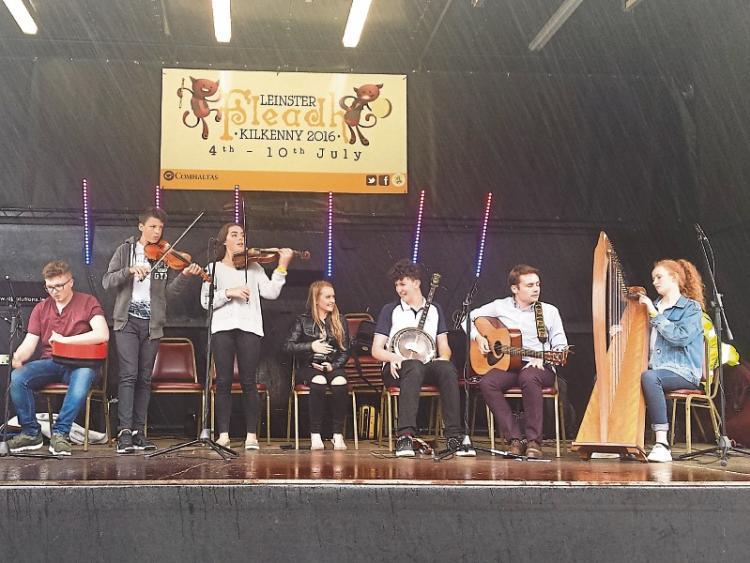 Spink Comhaltas had a very busy and successful weekend at the Fleadh Cheoil na hÉireann in Ennis over 19/20/21 August.

Ten individuals and the evergreen ‘Ballyroan Halfset’ competed representing Spink branch and Laois along with 6,000 other competitors from across Ireland, Britain, America, and as far away as Japan.

Getting to the starting line in the All Ireland is a huge achievement in itself, particularly given the difficulty of qualifying through Leinster, which is the largest and most challenging provincial fleadh.

The Spink competitors were very well supported, as indeed were other Laois competitors, all of whom made a special effort to support their fellow Comhaltas members where possible.

The Spink musicians had a busy week before the competitions even started, with David, Mark and Naoise all performing as part of a 'Meitheal Trad Orchestra' alongside acclaimed trad group 'The Tri-Tones', and David featuring with fellow Laois musicians Caoimhe Lowry and Molly Donnery, and 2 others from Waterford and Kildare live on Fleadh TV. David, Mark, and Naoise were joined by Aoibhe Kettle, and Roisin & Aibhlinn Doheny in a fantastic performance of '1916: Visions & Voices' lead by the incomparable Martin Tourish, from Altan as part of a Laois Music Generation performance on one of the 2 gig rigs in Ennis.

Spink's competitors performed magnificently in the competitions themselves. A total of 6 medals were brought home - congratulations to the following:

The medal haul could (should!) have been even higher. Ultimately, it is a judge's opinion on the day as to who should place, and on a different day, with a different judge, we are confident that most of our other competitors would also have placed in the medal positions. However, the audience reaction told its own story, with extremely warm and appreciative feedback from audiences and other competitors to Spink members.

Congratulations too to all of the other Laois competitors who continue to maintain the reputation for excellence in Comhaltas, and who in turn performed for their own branches with great distinction.

It was great to see the goodwill and support that Spink competitors received from our sister branches across Laois.

One of the most exciting young trad groups in Ireland, ‘Fiúntas’ – who are made up of members of Spink and Camross - had 7 out of its 8 members performing in the All Ireland Fleadh.

They rounded off their own busy weekend with a stomping performance on the main Shannon Airport gig rig on Sunday evening.

Spink branch of Comhaltas Ceoltóirí Éireann provides traditional Irish music lessons to members from Laois and bordering areas in Kilkenny, Carlow and Kildare. With a comprehensive instrument bank to support members learning music in a cost effective way, Spink prepares members for Fleadh Cheoil na hÉireann as well as the traditional Irish music examinations. Most importantly, the tradition of playing and enjoying Irish music is being handed on to a new generation. More information is available on Spink Comhaltas on Facebook or from ccespink@gmail.com