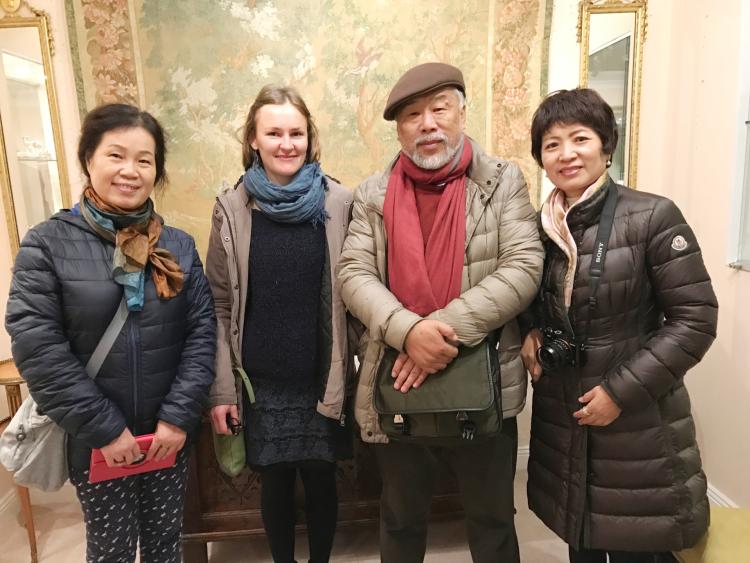 Sheppard’s Irish Auction House was honoured with the visit of the renowned Chinese artist Hong Ling (born Beijing 1955) to its Durrow auction rooms following the launch of his retrospective exhibition now showing at the Chester Beatty Library, Dublin. Hong Ling is one of China’s greatest and most revered landscape painters.

Born in Beijing in 1955, Hong Ling studied oil painting in the years after the Chinese Cultural Revolution (1966–76). In the mountains of rural China, however, his brush found a new path. Drawing together the imported medium of oil on canvas with the landscapes and philosophies of China’s artistic heritage, Hong Ling has made a contribution to the world of Chinese landscape painting unparalleled in its vibrancy.

His retrospective exhibition at the Chester Beatty Library, Dublin, charts the development of Hong Ling’s art from student paintings in his personal collection to his vast later works painted in oil and in ink. Working from his studio in the foothills of the Yellow Mountains of China’s Anhui Province, Hong Ling reveals the charged atmosphere of this dramatic locale from the bold colours of the shifting seasons to the heavy mists that weave among pine-clad peaks. As exhilarating as they are immersive, Hong Ling’s paintings stand as an invitation to join him in the landscape that is his home and his inspiration.

Artist Eimear Brennan, granddaughter of Kilkenny publican, the late Geoffrey Brennan  - The Wheel Inn, Ballyoskill - artist Eimear Brennan was introduced to Hong Ling by Philip Sheppard who is an admirer of her work. Eimear loves nature, folklore, fairytale, mythology, film, and all things magical inspire her pen and ink paintings. She love to draw outdoors in nature: a place by the sea, a forest, a public garden, a heritage site, anywhere as long as it is outdoors and feels uplifting. Each place that she visits offers its own kind of inspiration. She creates from her imagination allowing the feel of her surroundings to flow into each piece.

The Chester Beatty Library is the pre-eminent Irish institution promoting the appreciation and understanding of world cultures, and the engagement with the peoples whose cultures are represented in the Collections. The Library contains some of the finest treasures of the great cultures and religions of the world. The Collections were bequeathed to the Irish people and entrusted to the care of the State by Chester Beatty (1875–1968), who was a successful American mining engineer, collector and philanthropist.