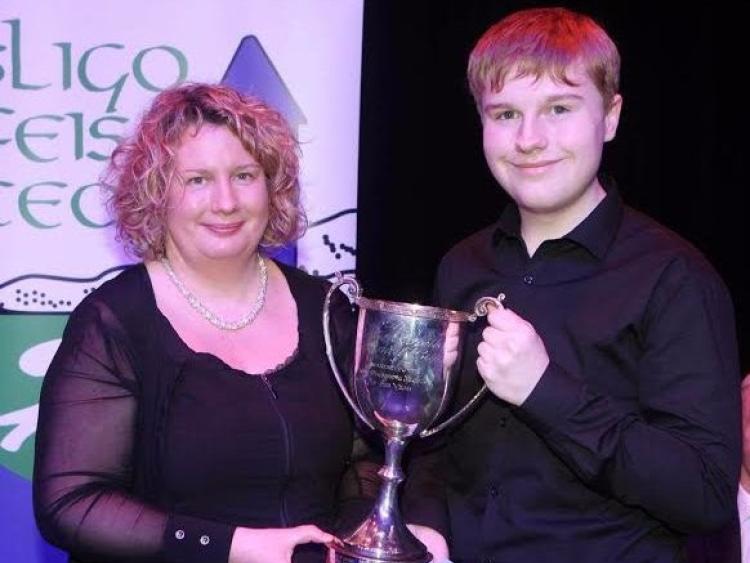 Talented violinist Senan Moran from Dysart, Stradbally was the winner of the RTÉ Lyric FM Instrumental bursary at the 2017 Sligo Feis Ceoil.

The young musician showcased his talents at the national event held last week in Sligo town.

Senan is a student of David O’Doherty at the Dublin Institute of Technology (DIT) Conservatory of Music and Drama. He won the Senior Violin competition and was presented with the Burns Perpetual Cup.

Later that evening, he went on to win the RTE Lyric FM Senior Instrumental Bursary (€1000) and the Anita Loretto Memorial Cup, which was presented by Lyric FM producer, Gail Henry.

Over the years, Senan has competed in the Violin, Piano and Vocal Competitions at both the Sligo Feis Ceoil and ESB Feis Ceoil Dublin.

In 2015, he won the under 16 Violin Repertoire competition at the Midlands Feis Ceoil. He performs with the DIT Symphony Orchestra with performances in various venues including the National Concert Hall.

He was a member of RTÉ Cór na nÓg for over 3 years where he made numerous appearances in the National Concert Hall, Lyric FM, RTÉ Radio 1 and RTÉ Television including The Late Late Show.

In 2011 at the Grand Canal Theatre Dublin, Senan performed a solo during the screening of the epic Motion Picture ‘The Lord of the Rings’ to Howard Shore’s remarkable score performed live with 200 performers which included RTÉ Cór na nÓg, Our Lady’s Choral Society and the RTÉ Concert Orchestra.

Senan is a multi-instrumentalist who at 17 yrs old has achieved acclaim in both Classical and Traditional music. He has competed at Fleadh Cheoil na hÉireann on numerous occasions and holds 6 All Ireland titles, 3 of which are for the fiddle. In 2013, when he won the under 15 fiddle competition in Derry, he was invited to perform live on RTÉ Ceilí House.

In 2014, he won the Junior Fiddler of Dooney competition and was asked to perform with Dessie Donnelly and Michael Mc Goldrick at the Hawkswell Theatre, Sligo as part of the Sligo Live Festival.
From the age of 4, Senan has showed a natural musical flair and is particularly skilled in violin playing.

He lives for music and has won many competitions at both local and national level. He hopes to be able to play music for many years to come.