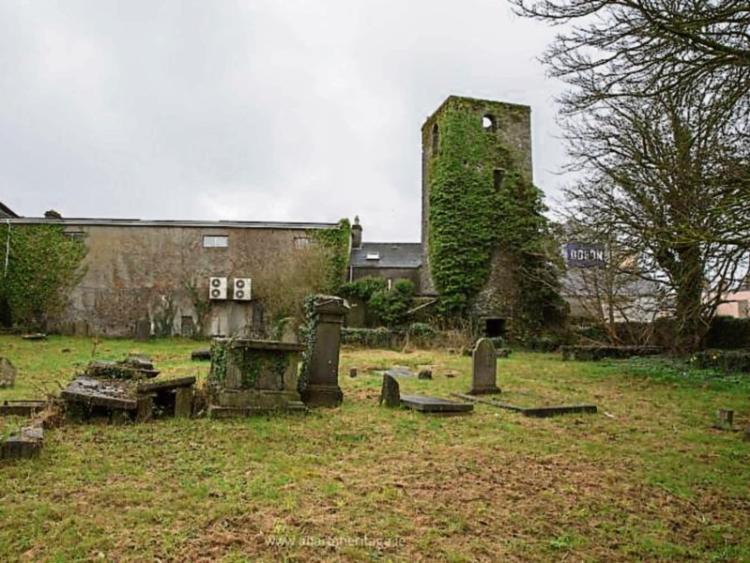 The 16th century tower and graveyard ‘Old St Peter’s Tower’ in the medieval centre of Portlaoise in county Laois, is to open as a public garden under a three year conservation project.

The tower and grave monuments must be made safe before the public can visit the graveyard, described by Heritage Officer Catherine Casey as “a small quiet site, not hugely celebrated, that has a fascinating past”.

“It is really one of the most important sites in the town. It’s history goes back to the foundation of the town,” she said.

“It is reputed to be the resting place of Grant the highwayman, the past person to be hung in Portlaoise, as well as the Jacob and Mosse families from Portlaoise,” said the Laois Heritage Officer.

A archeological conservation project is underway at the site with the help of Portlaoise Tidy Towns and Laois County Council. There will also be a bat survey with the Irish Wildlife Trust Laois / Offaly branch overseeing the surveying and protection of other wildlife.

The 19th Century ironwork gates are to be restored, and the 18th & 19th Century grave markers are to receive conservation attention.

The site was announced recently as one of seven chosen for the national ‘Adopt a Monument’ scheme this year. No funding comes with that award.

“There is no money but they will provide us with networking and give it a high profile,” Ms Casey said.

The careful trimming of ivy and trees, which have grown into the stone walls, will also be carried out by experts.

“It is a complex site for such a small place,” Ms Casey said, giving a report on the plans at the March council meeting.

Cllr Jerry Lodge, Chairman of Portlaoise Tidy Towns, acknowledged the assistance of Laois County Council in the preparation of the application to benefit from the Adopt a Monument scheme.

"We look forward to working with the Heritage Council, Laois Heritage Society, Downtown Portlaoise and all community groups to bring this historic gem to a level where this cemetery will be open for visits at selected times to the local population, visitors, all school students and other community groups.

“Our Tidy Towns group wish to invite comments and suggestions from all parties to see how best we can conserve this wonderful historic asset," Cllr Lodge said.