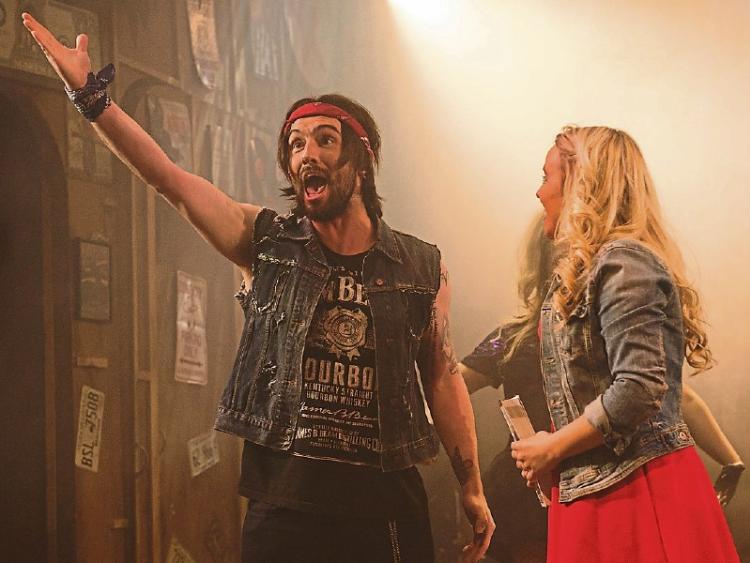 If you haven't heard about it by now then you mustn't be living in Laois!

Portlaoise Musical Society’s production of Rock of Ages was a huge hit! Directed by the one and only AIMS award winning Paul “Nippy” Norton. With musical direction by Emer Hartnett who is new to the Society and choreographed by Grace McGrath who also choreographed Portlaoise M.S succesul Strictly Come Dancing earlier this year.

The setting for the musical is the fabled Bourbon Room located on the famous Sunset Strip in California. Set in 1987, the music venue has seen better days and is run by Dennis Dupree (Jay Ritchie) and his assistant Lonny (Alex Cathcart) who is also the shows narrator. 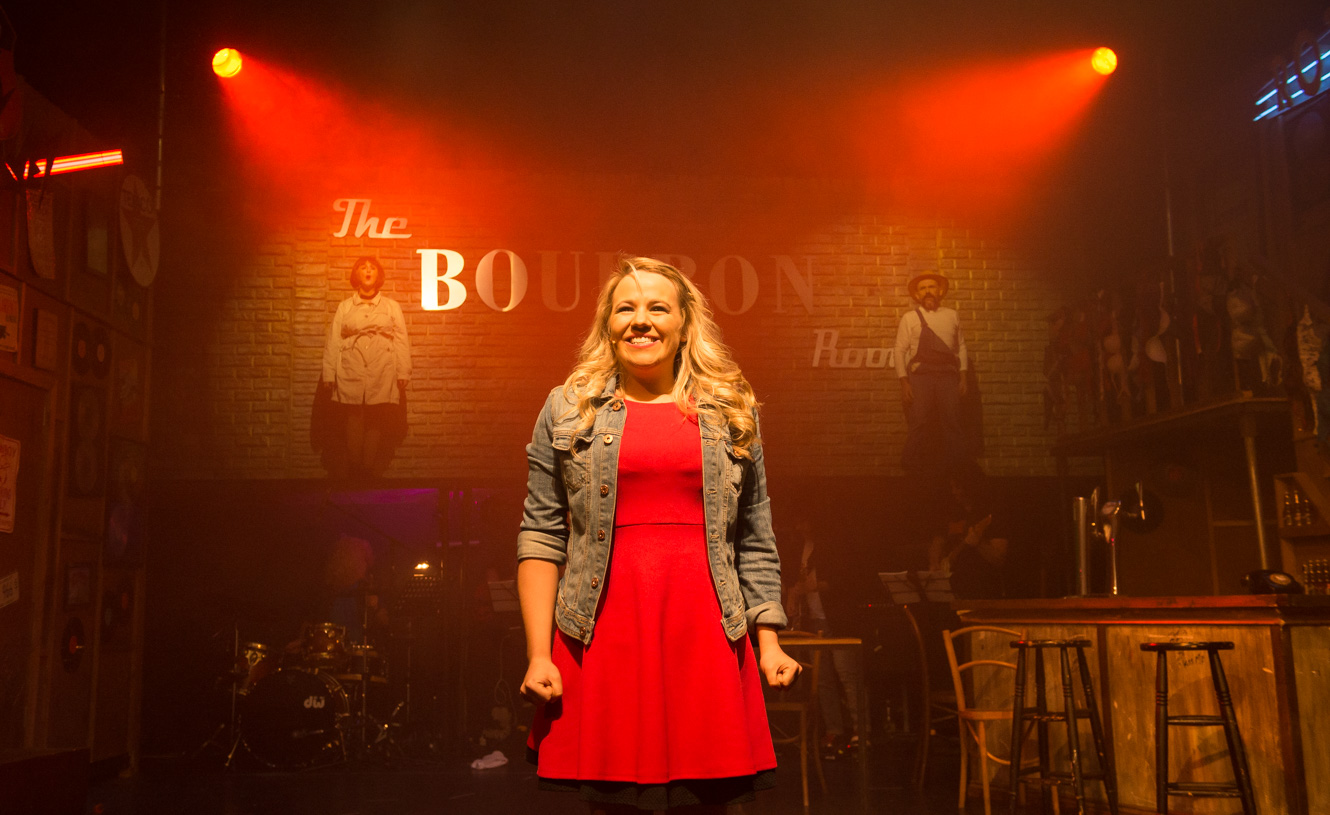 When ambitious Sherrie (Aideen Leacy), a hopeful small-town girl who wants to make it big as an actress, arrives off the bus, she bumps into Drew (Eoghan Fingleton), a worker at The Bourbon Room with big dreams of making it as a rock star.

Unfortunately all goes belly up when there's a chance the Bourbon Room may close down and the young lovers may not get together. And who knows how it will all end? Only Lonny “the Dramatic Conjurer” knows. 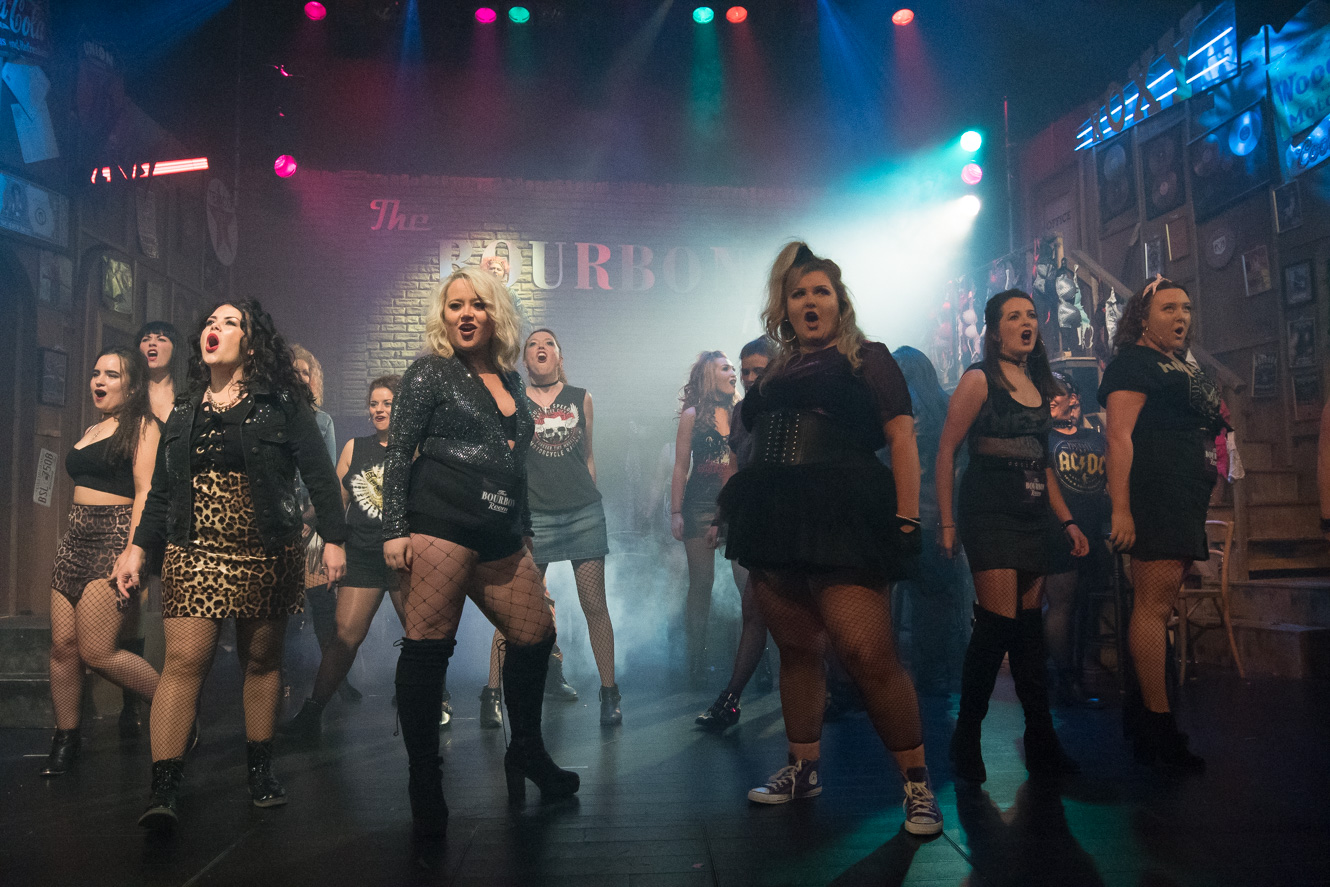 A very important element that must be addressed about this production: The set! Designed by John Wright, the set was breathtaking and something you would expect from a West End production. The open bar at the start of the show made me feel as though I had gone back in time to a rock concert.

A high point in the musical that I felt very connected to was the car scene during the song “Waiting for a Girl Like You” which made me feel as though I was on a first date with the two leads. The absent minded driving on your way there, where you get blown off for not having your lights on, the “should I make a move or not” thoughts that swirl around in your head and who could forget the West Coast Coolers and a blanket! 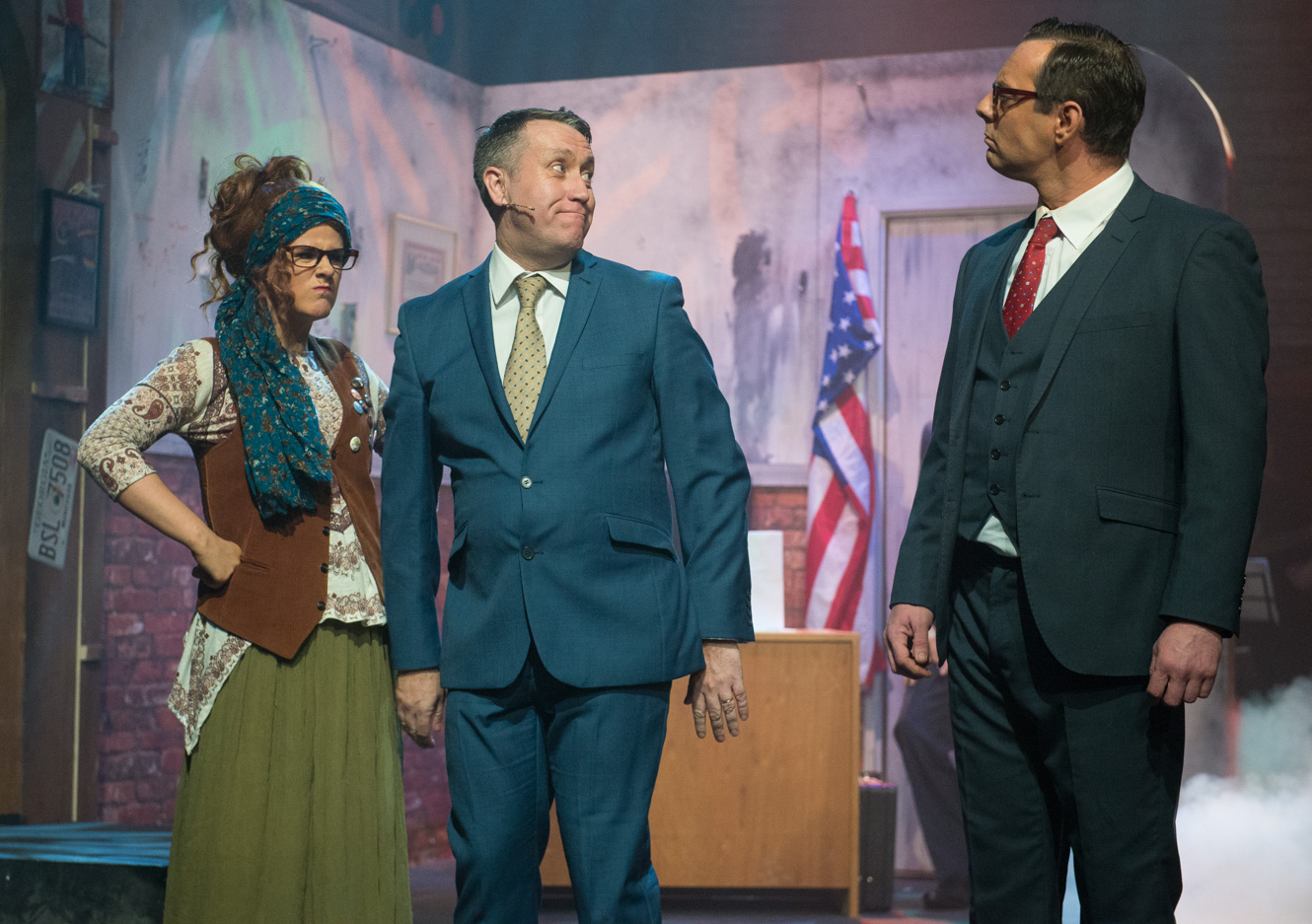 A definite high point in terms of comedy was the twist of Lonnie and Dennis falling in love during the song “I Can’t Fight This Feeling Anymore”. If it wasn't the comical circumstances of the two falling in love, the choreography really made the whole scene. With delicate hand holding transforming into a lift and ending with a rather priceless kiss, this scene had the audience in stitches.

Best vocals this year go to previous best singer AIMS award winner Eoghan Fingleton. His vocals in songs like “I Wanna Rock” really blew the roof off the theatre. From his award winning performance in Jesus Christ Superstar a few years ago playing Judas it is no surprise he was well set for this part.

Funniest character without a doubt must go to Alex Cathcart who played Lonnie who kept the audience entertained as a character and as a narrator. While playing close to the edge at times, including showing his underwear not once but twice, nonetheless he was hilarious and totally in touch with the audience. Even inviting three girls to his dressing room during the interval. 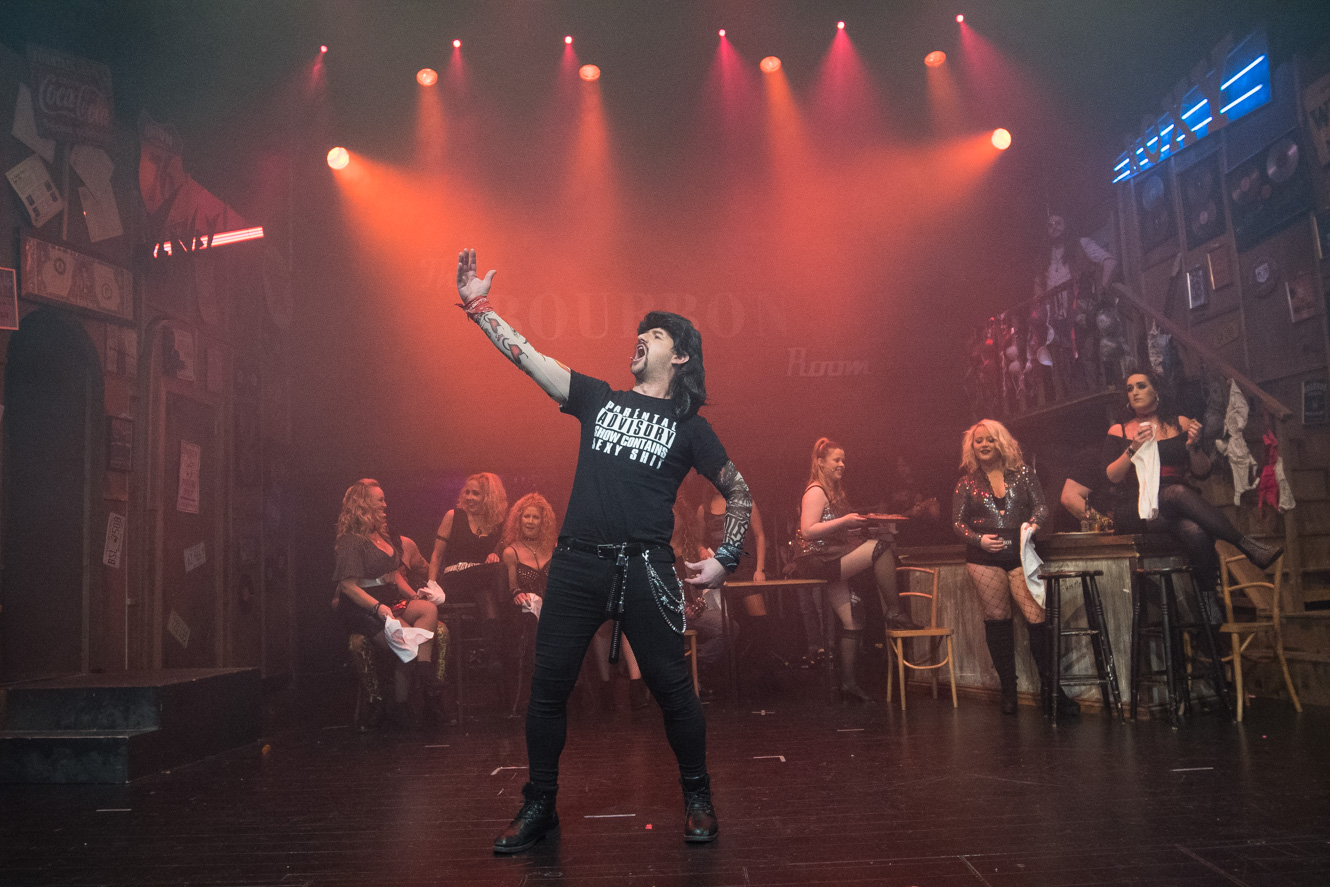 Something that always makes the thrill of live theatre is of course: the live band. It was enjoyable to see the live band, conducted by Emer Hartnett, play their hearts out during the entire show. It really added to the whole experience of being at a rock concert.

The costumes which seemed to be a bit on the skimpy side at times, only added to the show and its storyline. I think it takes a lot of guts for local talent to get up on stage in front of their home town crowd wearing less than they're used to but they carried it off in spectacular fashion. Particularly humourous was Lonnie’s t-shirts with rather funny slogans. 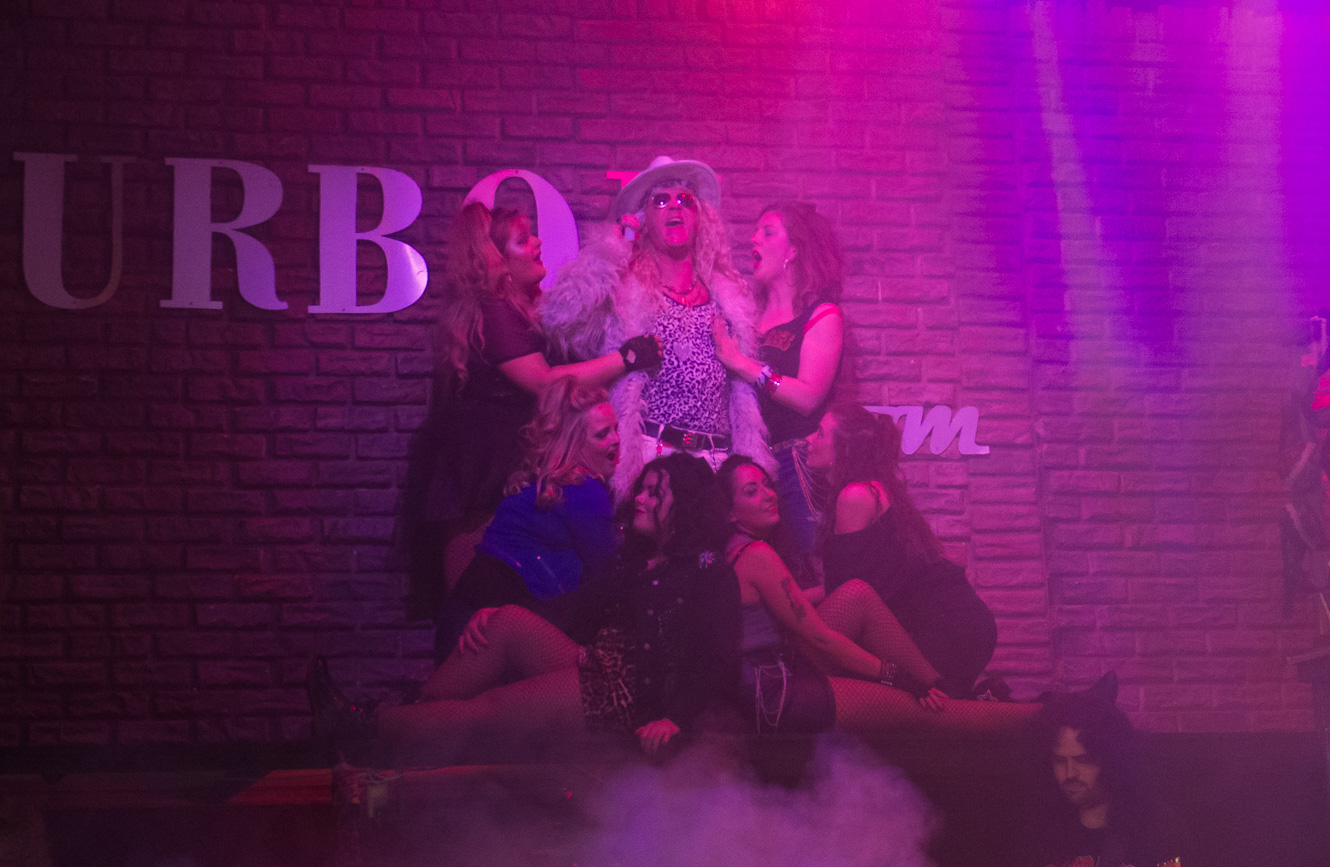 In some musicals, choreography can seem to be a bit of a space filler but it is not the case in this production. The choreography only added to the show and included such extremes like pole dancing. It kept the audience waiting with bated breathe to see what other delights the show would grace us with.

To Nippy and all his cast and crew: Take A Bow!! The only problem for you all now, how are you going to beat this production?

Photographer Denis Byrne retains copyright on all pictures. It is illegal to reproduce elsewhere without his permission.