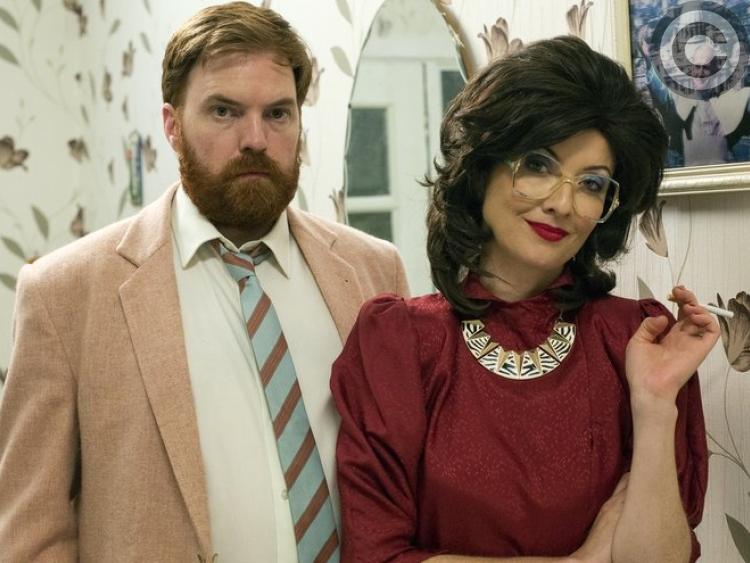 A complaint was made about discrimination against red haired people in the hit TV comedy series staring Laois comedian Bernard O'Shea who is currently featuring in Dancing with the Stars.

Ms Niamh Turley made a complaint to the Broadcasting Authority of Ireland (BAI) about a scene from Bridget and Eamon on RTÉ on September 19 2017.

The complaint was submitted under the Broadcasting Act 2009, Section 48(1)(b) (harm and offence); and the BAI Code of Programme Standards (Principle 5 - Respect for Persons and Groups in Society).

The complaint concerned a scene in which the character Eamon, played by Bernard from Durrow, suggests going upstairs. The character of Bridget's mother replies "with the lights off so I can't tell that you're ginger".

The BAI said the complaint stated that this remark is racist and demonstrates discrimination and prejudice against people with different hair colour. "The complainant believes this type of content promotes the bullying and alienation of people with red hair" said the BAI.

In its response to the complainant and the BAI, the broadcaster argued that most of the narratives and conceits in this comedy programme are based around 'poking fun at, and subverting, the erroneous or corrupt actions and attitudes of the main characters'.

For example, the casual misogyny of Eamon and the main couple's tolerance of inappropriate or reprehensible behaviour.

In this vein, the remark by Bridget's mother was intended to demonstrate her shallow and unpleasant character, that is, she (and those like her) are the target of the humour and not people with red hair.

The broadcaster regards this content as in keeping with the absurdist comic voice of the programme and it's ironic lampooning of Irish life and culture and believes that audiences would clearly understand the nature of the point being made.

The broadcaster said it does not believe that people with red hair represent a group such as those protected by Principle 5 of the Code of Programme Standards or that the complaint includes evidence to support the claim that the content prejudiced respect for human dignity or stigmatised, supported or condoned discrimination or incited hatred against persons or groups
in society.

The BAI's Executive Complaints Forum considered the compliant but decided to unanimously reject.

Having considered the broadcast and the submissions from the complainant and having had regard to the relevant legislation and Code, members decided to reject the complaint. The Forum's views and basis for the decision are set out below.

• The BAI Code of Programme Standards requires the representation of persons and groups in society to be appropriate and justifiable and to not prejudice respect for human dignity. There is a further requirement for programmes not to stigmatise, support or condone discrimination or incite hatred against persons or groups in society.

• The Forum noted that the comment made by the mother character was implicitly derogatory of people with red hair, however, it also noted the broadcaster's view that the character is not intended to be likeable and the programme often highlights the characters' tolerance of poor behaviour for comedic effect. The Forum had regard to fact that this is a comedy programme and that one of the functions of comedy is to push the boundaries of acceptable speech. Comedy content, therefore, may be offensive to some viewers or listeners and this is acknowledged in the Code. The Code is concerned with content that may cause undue offence.

• The Forum is of the view that this content clearly offended the complainant but did not unduly offend in a matter that contravened the provisions of Principle 5 of the Code. The Forum noted that people with red hair are not considered a separate 'race' or group in society that would require the protections of this principle in the Code. The Forum did not agree, therefore, with the complainant's contention that the remarks were racist, discriminatory and promote bullying and alienation of people with red hair. The Forum also had regard to audience expectation, channel and time of broadcast, including the fact that the main characters in this series are well-known for their inappropriate comments and behaviour and accept these in the comedic spirit in which the programme is made.

• In view of the above, the Forum did not agree that the programme infringed the requirements of the legislation and Code in manner specified by the complainant. Accordingly, the members rejected the complaint.