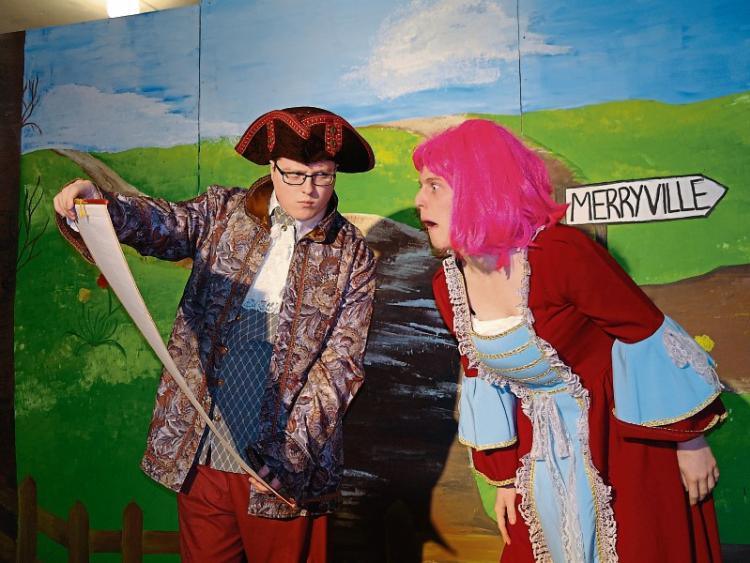 Raheen Panto group will stage their 31st Anniversary pantomime “Jack and the Beanstalk” in Heywood Community School Gym  second for a year.

The cast and chorus are hoping to repeat the success of last year’s show which attracted record crowds to each performance.

Excitement is at fever pitch in Raheen as the Group put the finishing touches to this year’s production and as many of the cast and chorus are pupils at Heywood everybody is eagerly looking forward to bringing the Panto once more to this great venue and hopefully to an even bigger audience.

Jack and the Beanstalk is one of the classic Pantos and is a firm favourite with children and adults alike.

The familiar story line of Jack who goes in search of the evil Giant to rescue his sweetheart and save his village from the marauding Giant is sure to stir children and adults in their seats and the familiar cries of “Look behind you” are guaranteed to ring out through each scene.

The ongoing success of Raheen Panto is itself a bit of a fairytale as it is certainly very unusual for a rural parish to have such a multi-talented group and Producer /Director John Hosey says it is all down to an abundance of local talent which has graced the stage in Raheen year after year and established a unique tradition in entertainment which attracts audiences from near and far.

A testament to this fact is the number of present and past members currently studying Music and Theatre Studies at Third Level. Bringing the Panto to the spacious surrounds of Heywood has been another huge step in the ongoing success of this long running Panto Group.

The record crowds that attended last year are a fitting testament to the endless talent and hard work of every member of the Group.

This year’s production “ Jack and the Beanstalk“ follows the tried and trusted formula of comedy, colour, music, song and dance all condensed into a very lively entertaining panto.

The energetic and talented Cast is a perfect blend of youth and experience and includes some bright new stars as well as many familiar faces.

He won this prestigious award for his lead role in “Little Shop of Horrors which was staged in Heywood last November.

The part of Baron Moneybags is being played by Eamonn Oxley twin brother of Liam and is a well seasoned member of the Raheen Group and has played lead and supporting roles over the years.

The age old battle between good and evil which is an integral part of every Panto is played out in style in this production with Josh Bergin taking on the rather unconventional role of Fairy Sparkle, who thwarts the evil Giant’s plans at every step.

The larger than life Giant is played by Darragh Hosey who returns to the stage having served in the Panto Orchestra for the last couple of seasons.

Every Giant needs a faithful servant and the role of Hobnail is being played by Ben Barrett who will be fondly remembered from last year’s production of Little Red Riding Hood, where he played the Wolf to great effect.

Comedy is the lifeblood of Panto and the honours of Chief Comics falls to Anthony Dunne who plays Sponge Bob and Caoimhe O'Keeffe who plays Square Pants and with this pair lurking about there are bound to be loads of laughs and side splitting antics throughout the performance.

Every Panto has a diverse range of characters and the roles of Sadie and daughter Ezmerelda are being played by Stasia Kilroy and Colette Fennell.

Both of these ladies have played leading roles in past productions and bring their own individual flair to these colourful characters.

There are a variety of supporting roles which add variety to the storyline also and these include Matt and Sally played by Eoin Hosey and Shona Phelan, Star girls played by Natasha Dunne, Sarah McMahon, Leah Moffitt, Floriana Mezzapelle and Orla Joyce.

The Star of the Panto is undoubtedly “Spot “everybody’s favourite cow and this vital role is undertaken by Pat Phelan and Joe Stackpool, while Eoin Hosey also plays the Mummy.

The talented Cast is complimented by a lively and energetic Chorus who punctuate each scene with colourful dance routines and catchy familiar songs.

Chorus supervision is undertaken by Nicola Phelan and Amy Whelan.

Jack and the Beanstalk is the ideal way to chase away those Winter Blues in the majestic setting of Heywood Community School.

All admission is on the door.

The show is made possible by kind permission of the Board of Management and Principal Mr. Philip Bowe.