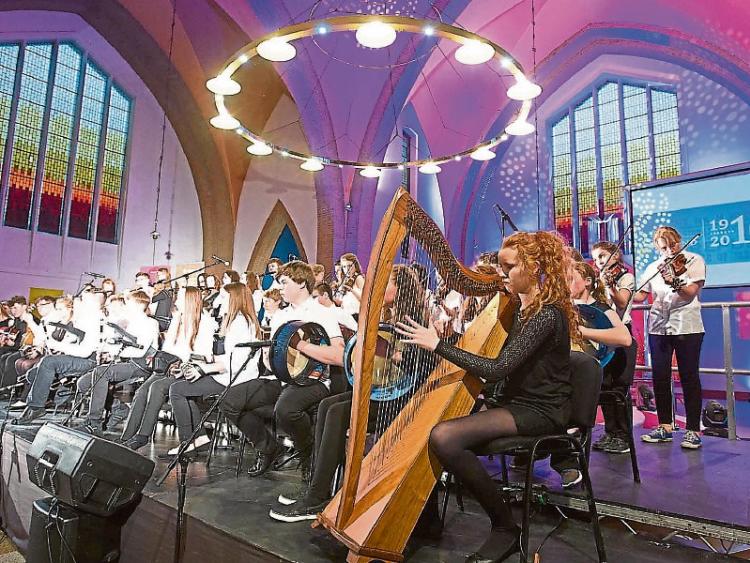 Many Laois families are looking forward to a concert in Portlaoise which will remember World War 1 and all those who have lost their lives in conflicts at home and abroad during that time and since.

The concert is one of a number of projects being organised by Port Laoise branch of Comhaltas Ceoltóirí Éireannd including the bid to bring Fleadh Cheoil na hÉireann to the county.

“The concert is also an opportunity to gauge community support for the fleadh bid and the talented musicians in Laois,” says Micheal Lalor, PRO, CCÉ Laois.

Headlining the concert will be the Comhaltas Laois Folk Orchestra performing music specially composed by Áine McGeeney. Áine who will be remembered for the 1916 Commemoration ‘Dochas Suite’ at the same church. A native of Louth, Áine now lives with her husband Colm in Portlaoise where they teach music not performing with their band Goitse.

The commemoration will include some performers who were born outside Ireland in Europe, America, Australia, Africa and Asia. For some time, Port Laoise Comhaltas branch has been training foreign nationals alongside traditional musicians and singers from the 96 different countries now resident in the county in a tproject programme supported by Laois Partnership Ltd.

As part of acknowledging the past, a group of Portl aoise musicians will visit Guillemont, an area of the protracted battle of the Somme where Laois soldiers were involved in the latter part of the battle of the Somme. The monument at Mill View acknowledges the deaths of 177 officers and men, not counting those who returned scarred physically and mentally, many of whom were members of the Irish Volunteers. A short video from the visit will be shown at the concert.

While the timing of the concert is related to the ending of WW1, the event will also acknowledge the fight for peace and the work of UN veterans in troubled areas, which is ongoing today.

Highlighting the random nature of death in war Irish Volunteer Tom Kettle, MP wrote, on 8th September 1916, ‘Somewhere the Choosers of the Slain are touching … with invisible wands those who are to die’. Leading a contingent of Dublin Fusiliers that included the future IRA and Irish National Army commander Emmet Dalton (who won a Military Cross at the Somme), Kettle was killed the following day.

Relatives of Tom Kettle and others connected with lesser known but equally courageous men and women, not only from Laois but from France, Germany and UK will take the stage.

A special invitation is extended to all with connections to those who fought in ‘The Great War’ and others who fought for peace and independence, to attend and show their commitment to a peaceful world.

Admission is free, to the event on Sunday, November 4 at 7pm.

Voluntary contributions to support the project and All-Ireland Fleadh Bid would be welcome.