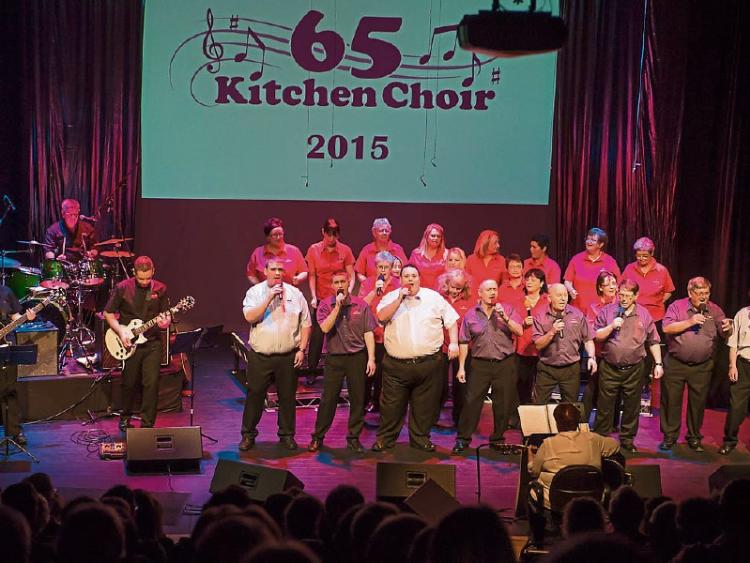 Portlaoise is in for a treat this weekend as the hugely successful 65 Kitchen Choir show returns to the Dunamaise Arts Centre for its 12th year due popular demand.

The show sells out three nights every year and has become one of the most popular winter nights out in Portlaoise with tickets usually selling out weeks in advance.

This talented group of local singers and musicians is led by well-known musician and guitar teacher Caroline Smith who organises the show.

The 27 strong choir rehearses all summer in Caroline’s packed kitchen with drums and guitars in the lead up to the big three-night run of performances at the Dunamaise Arts Centre.

Previous shows have involved a Christmas theme due to the time of year but this year’s production will ‘Let The Good Times Rock and Roll’ with a full set dedicated to the most popular hit songs of recent decades that everybody knows and loves.

Caroline told the Leinster express about organising the exciting show for another successful year.

“We decided not to do the Christmas theme this year just to change it up and have something different.

“The audience can expect all the rock and roll classics from the last 20 years - it is a total sing-along show,” Caroline said.

The choir started out 12 years ago singing for the ‘Mass on the Grass’ in Marian Avenue, Portlaoise.

It naturally evolved into the choir putting more and more songs together and preparing a big show.

They have never looked back and have enjoyed many successful performances together over the years.

Caroline has the support of her musical family behind her and the choir.

She says the brilliant success of the show is down to the great local support and the type of music they perform.

“There is great support in Portlaoise, they come with us and have been there since day one.

“People in Portlaoise are great to support local and we push it and release the dates to early to let everyone know when it is on.

“We do what people like, it’s the kind of show I would like to go to. The energy is brilliant and the members have been there together through good times and bad,” Caroline said.

The performance is guaranteed to have the packed theatre singing and clapping along.

The choir will belt out songs listeners had forgotten about, chart toppers, one hit wonders, all delivered in a way only this choir can.

The 65 Kitchen Choir show will take place on Thursday, Friday and Saturday, November 15, 16 and 17 at the Dunamaise Arts Centre. Limited tickets are available from the box office and online.