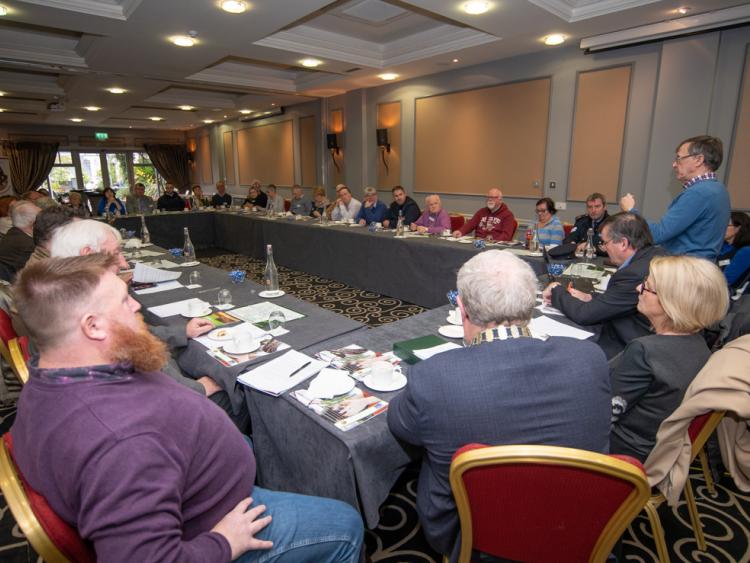 PJ Phelan makes the pitch for Portlaoise to host the Fleadh Cheoil in 2020. Picture: Denis Byrne

Portlaoise town will be return to its village roots as a venue with 21st-century facilities that can stage an All Ireland Fleadh Cheoil that is rooted in the traditions of Comhaltas Céoltóirí Éireann.

That was the key message given to Leinster Comhaltas delegates during the bid presentation staged to bring one of the biggest events in the country to Portlaoise in two years time.

Leinster Council Comhaltas members were in town on Saturday, December 1 to hear the pitch and visit the venues earmarked by the local organising committee for the event which could draw up to 500,000 visitors to what is one of the biggest events on Ireland's cultural calendar.

Apart from proclaiming the Laois county town as a fantastic venue, the delegates were presented with a venue which has the potential to return the Fleadh its village roots.

The organisation committee, which is Comhaltas led, have taken advantage of the town's condensed centre and many new and existing public buildings to come up with a 'Fleadh Village' concept.

A total of 20 venues have been chosen to include schools, hotels, leisure centres halls and a purpose-built dome to host the competitions and other Fleadh events. The village concept means strolling between the furthest apart venues takes just 16 minutes.

A diverse group of organisers representing various groups and organisations are back-boning the organisation of the festival. They were on hand at the Midlands Park Hotel Portlaoise to meet the delegates to make the case and answer questions.

Portlaoise Comhaltas and Laois Comhaltas Chairman PJ Phelan welcome the delegates to Portlaoise. He said this is Portlaoise's first application for the Fleadh but it has been in the works for some time.

"We are now in a position now to be able to run the Fleadh as soon as it can come to the county," he said.

"The county has terrific experience of dealing with events such as this. One need only think of the Electric Picnic events in Stradbally, one of the preeminent music festivals in the world. We have managed that for well over a decade with extreme success and pleasure being expressed. We also have terrific success hosting the National Ploughing Championships.

"In terms of the venues themselves, we have quite a number of areas in terms of schools, halls and public realm areas where the event can be safely hosted.

"We would like to think that there is no better location in the country in terms of ease of access through rail, bus and motorway. Our catchment area within a 60-minute drive of Portlaoise is about 1 million people," he said.

Mr Mulholland said the key will be the collaboration with the local organising committee. He was aware was organisation was paramount.

"We are extremely conscious that reputation of a festival like this depends on good organisation and management both ad advance planning and during the event itself. We know that if you fail on this or are even mediocre you affect the reputation of the event itself or the whole Comhaltas movement," he said. 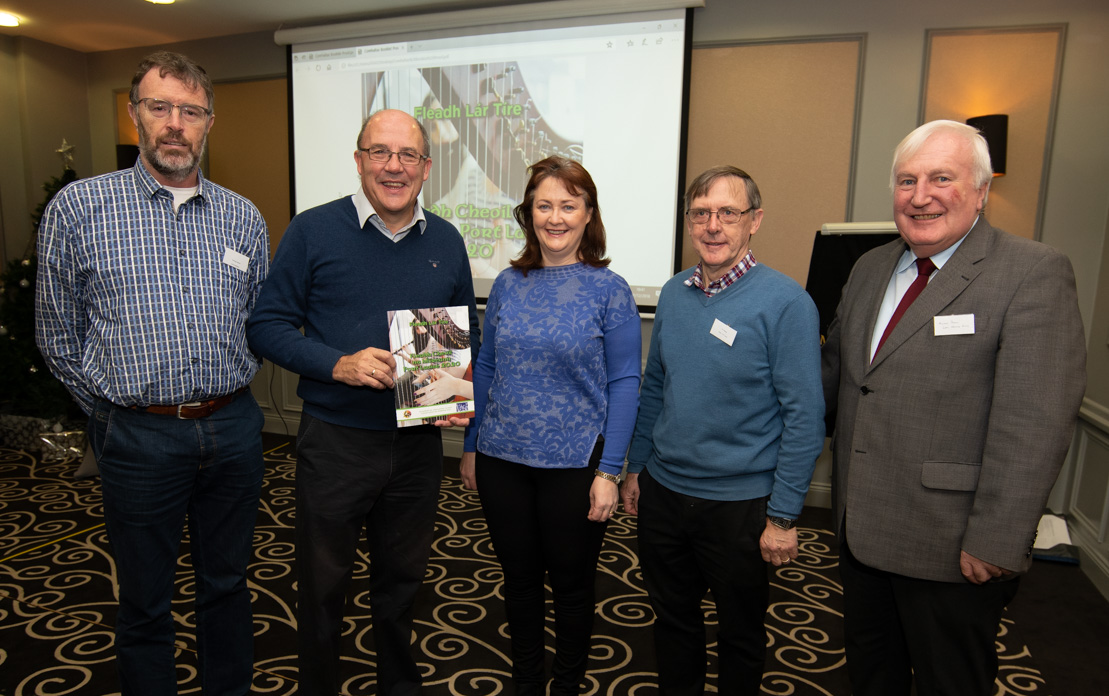 Joe Cuningham, Chief Executive of the Laois Offaly Education and Training Board, recalled his childhood attending Fleadh Cheoils a said it gives him great satisfaction to be involved with the 2020 bid.

"We will be delighted to make our facilities available for the Fleadh. What strikes me about Portlaoise is the close proximity of all the venues to the town centre. That is a huge asset to the Fleadh Cheoil," he said.

Cllr Catherine Fitzgerald, Cathaoirleach of the Portlaoise Municipal District said there is unbelievable goodwill in the town.

"We would love the opportunity to assist in any way possible to host this fantastic event. We already have the commitment of all the organisations in the town and surrounding areas.

"There is unbelievable goodwill in Portlaoise towards hosting this event. We believe it is the right location. We are very centrally located and have the major infrastructure and the schools will also be a huge asset in enabling a very successful. The very biggest asset we have is the very dedicated members of Comhaltas we have in the town and county. They have worked extremely hard over the years to involve young people in the organisation.

"I know in my heart and soul that we have the best people in Ireland at the top of Comhaltas in Laois and they will do everything possible to ensure everyone has an enjoyable time in Portlaoise. The community would really look forward to it and it would be a wonderful honour for us host the Fleadh Cheoil 2020," she said.

Michael Parsons, Chairman of Laois Heritage and the Heritage Council said all groups will come together in Laois to support the Fleadh.

"You are talking about a venue where people will work together to promote culture, craic and good fun," he said.

Portlaoise publican PJ Kavanagh told delegates that the Old Fort Festival was proof of the co-operation given to holding a big public event. He said it has attracted thousands of people to the town centre with more than 20,000 attending in 2018. He said the organisers received great support.

"There was no door closed to us," he said.

Pat Collier of Camross Comhaltas said the village idea will return the Fleadh to its roots.

"The Fleadh Village can be created easily because all the business traffic during the Fleadh weekend is directed away from the centre of the town. This is an enormous asset for the organising of the Fleadh.

"The town does lend itself naturally to having the old traditional type Fleadh music and entertainment on the street. I think that is a big plus to bringing the Fleadh to Portlaoise," he said. 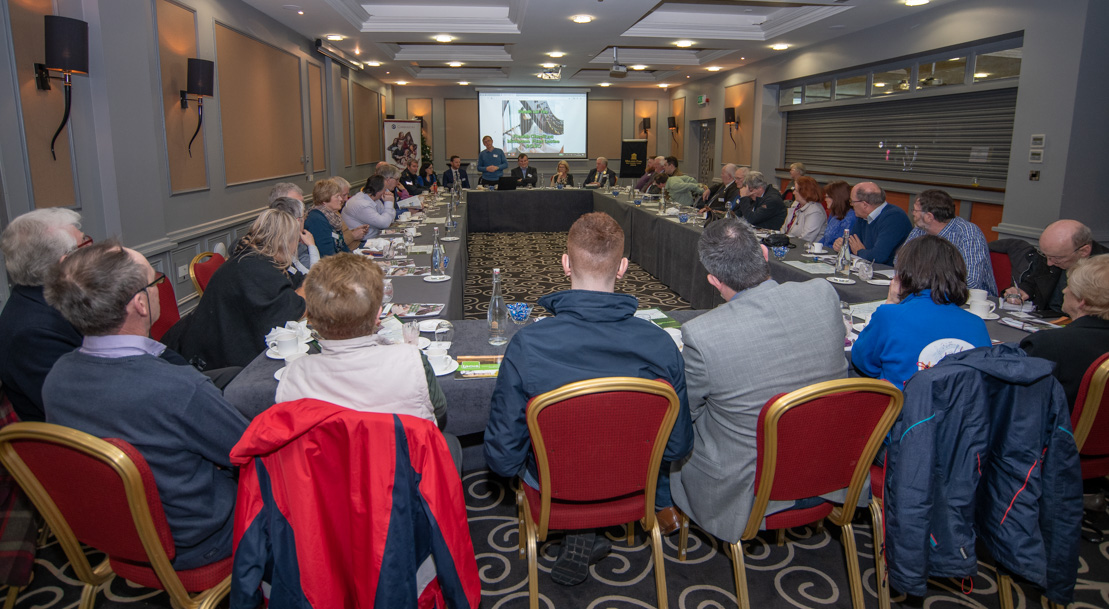 In response to concerns from one of the delegates about school availability for venues, Des Sutton, Principal of the Holy Family Senior School in Portlaoise, said there are five halls in his school campus alone. He said other schools have confirmed to him that their facilities will be available. Mary Phelan of Portlaoise Comhaltas said schools would not be an issue as there are plenty of new buildings in the town that are confirmed as venues.

Garda Sergeant Gerry Kennedy said gardaí would ensure buskers or beggars could be moved along where they are causing an obstruction. He said Laois Offaly Gardaí have extensive traffic event management experience from the hosting of the Electric Picnic and Ploughing Championships. He also said teamwork is a standout feature of the management of many events.

The bid presentation was also attended and supported by Comhaltas branches from right around Laois. Margaret Culleton of Mountmellick Comhaltas said there is a huge tradition of Comhaltas around Laois.

Others to endorse the Fleadh Portlaoise bid via a specially made video were former GAA President Liam O'Neill and Anna May McHugh of the National Ploughing Championships.

Attracta Brady, Cathaoirleach of the Leinster Council of Comhaltas thanked Portlaoise for the presentation and the best of luck in its bid to win the Leinster nomination. She Mullingar, Wexford, Tullamore are also in the running.

"It is extremely competitive. The stakes are very high but because we are Comhaltas we want a traditional Fleadh, a Comhaltas-led Fleadh and we want everyone to enjoy it equally.

"The ordinary Comhaltas person is a participant, they are not commercial musicians. We want to make sure there we have a traditional Fleadh," she told the Leinster Express.

Ms Brady said any of the Leinster towns would be an excellent venue. She said getting the backing of Leinster Comhaltas is not the final decision. The other provincial councils also nominate venues with the final venue decided by the Comhaltas Ard Comhairle.