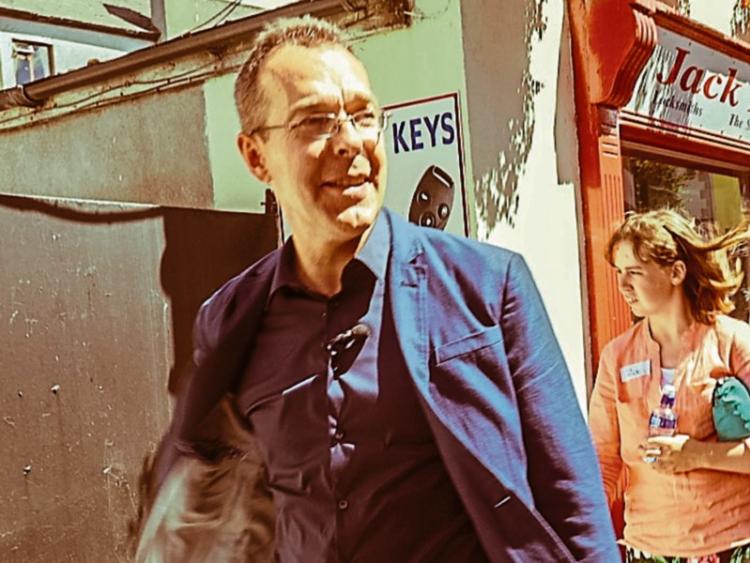 A new film by a Laois broadcaster and documentary maker exploring Portlaoise through the eyes of schoolchildren is set to be screened this month at the Dunamaise Arts Centre.

What makes 12 primary school children want to go back to class at the weekend? What makes a former County Manager admit to making mistakes? What makes 30 women come back to their town after 50 years?

Award winning broadcaster and documentary maker Ann Marie Kelly will premiere her second film ‘Walking Back To My Heart’ in Dunamaise Arts Centre, Portlaoise on Monday December 17 at 7pm.

Shot over the course of three years, the film focuses on stories from the past and looks to reimagine the future of Portlaoise through the eyes of a group of 12 children led on a walk around the heart of the town by renowned local poet and author Pat Boran.

Pat’s humorous Portlaoise-based memoir, ‘The Invisible Prison: Scenes from an Irish Childhood’, was published in 2009 and recently reissued. In all he has published more than a dozen books of poetry and prose.

The group of primary school children from various cultural backgrounds were picked to take part in workshops and armed with the knowledge and stories learned in the workshops they went on to host a family friendly Heritage Trail for Laois Heritage Week.

The trail began at Fitzmaurice Plaza and ended in Dunamaise Theatre with the showing of a short film containing footage from their weekend.

They recorded a unique shared experience between the children, their interaction with the various community groups and a one of a kind resource for the town of Portlaoise which captures a snapshot of a town in transition.

They provided access to historical sites such as the interior of Fort Protector and Old St Peter’s Church as well as Dunamaise Theatre where the significance of each site in relation to the foundation of the town was explored with the children.

They captured the weekend’s work on film with a production team who were informed by two and half years of research and supervised by experts in the fields of heritage and education.

The workshop was led by Pat Boran who was directed by Ann Marie Kelly.

The aim was to launch the film in time for consideration for the 2018 film festival circuit with a unique private premiere for the film in Portlaoise town.

The private premiere will now take place on December 17 at the Dunamaise Arts Centre.

This unique snapshot of a town in transition blurs the lines between the past and present and unfolds to reveal a story full of memories, emotion and hope, and reveals the importance and reward for investing in the future.

Containing previously unseen archive footage of the town and its people, Pat revisits his childhood classroom in the Convent, and in the course of his journey with the children, finds hidden amidst the decayed areas surrounding the Main Street the possibility of new life.

The film is currently being submitted for consideration on the international film festival circuit and is supported by Creative Ireland funding.

In October of this year, Ann Marie picked up 2 IMRO National Radio Awards for her Open Door programme on Midlands 103 and as Specialist Music Broadcaster of the Year.

Tickets for the event are priced at €7 with all proceeds being donated to the special needs classes of Holy Family Junior School. There will also be a Q&A with the production team after the screening.

For more details and bookings contact Dunamaise Arts Centre at www.dunamaise.ie or call 057 866 3355.