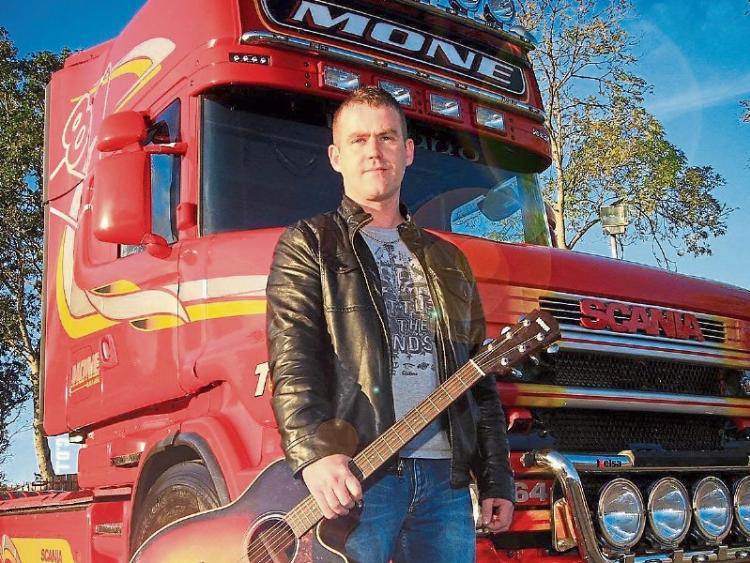 Marty Mone - singer, songwriter, agricultural contractor, and trucker - will be coming to Portlaoise this February to play Kavanaghs Venue.

Marty was driving tractors and playing the guitar at a very early age. By 18 he was working full time driving tractors, diggers and lorries and gigging with a band at the weekends. Somewhere in the middle of all that he started writing and recording his own songs and making his own music videos.

Then came Hit the Diff, which Marty wrote while out working on the digger and lorry and it was about his daily life on the road. It all started as a bit of craic and Marty published this video to YouTube in late 2014, making the video from pictures which he took on his phone while out working and also includes pictures of Marty out driving from a very early age. This video took off immediately and it didn’t end there.

This all led to the release of his first album Hit The Diff which he fully wrote, recorded, mixed and mastered and published himself featuring ten original songs and becoming one of the biggest selling independent releases since its first release in 2015.

Other songs on his album are now a roaring success including Better Than A Dream which is extremely popular as a first dance song at weddings.

Marty set up his own record Label Marty Mone Music and he also records, mixes and masters his own songs in his own studio The Plot Cottage Studio, which he purposely built to record his own music. Marty also shoots and edits his own music videos.

Marty then released Slip the Clutch in late 2015 and it followed in the success of Hit the Diff.

Marty also recorded a new TV Ad with Eurospar which quickly followed by a second TV advert for Christmas 2017. Marty’s original song The Ploughing Song was used for a TV advert by RTE for the 2017 ploughing championships.

To date Marty’s music channel Marty Mone Music has over 14 million views. Marty is now gigging all over Ireland and UK with his own band and playing on the same stage as some of Ireland and UK’s biggest stars.

Marty and his band promises to offer a great night of entertainment, showcasing his own original songs, cover songs, and a little bit of madness.

Marty Mone comes to Kavanaghs in Portlaoise on Friday February 8, at 9:30pm.