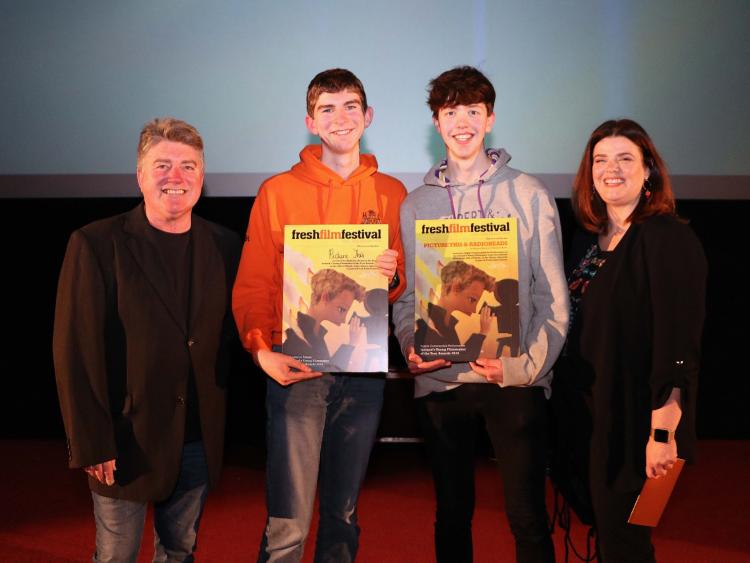 Two young, talented Laois filmmakers made waves at the Fresh Film Festival 2019 and were awarded a Highly Commended for Performance at this year's Ireland’s Young Filmmaker of the Year Awards.

Filmmakers Reuben Harvey and Matthew Howe both from Abbeyleix took home Fresh Film Festival awards for their films ‘Radiohead’ and ‘Picture This’.

They also won the Audience Awards on the day for his film ‘Picture This’, which follows two idiots who enter into an Irish short film festival but struggle to come up with a good idea.

Radiohead follows the story of two idiots who accidentally contact beings of an extra-terrestrial nature and foolishly underestimate the aliens’ threats.

Ireland’s Young Filmmaker of the Year 2019 announced its Senior winners at the Fresh Film Festival 2019 in Limerick on Wednesday, March 23.

The competition, which received a record of more than 1700 entries this year, announced the winners at the Odeon Castletroy in Limerick.

Reuben Harvey had previously reached the finals of Ireland’s Young Irish Filmmaker of the Year Awards in 2018, with his film ‘Lifeguard’, which also won the Audience Awards for the Leinster Regional Heats that same year.

Speaking after receiving the award he encouraged other young people to get involved.

“I’m so happy about winning this award. I worked really hard and it paid off. I would encourage anyone interested in film to enter next year as it’s a great opportunity and encourages young people to make films,” he said.

Other entries received Highly Commended Awards on the day, including Pippa Molony from Dublin 15 for Story for her film ‘Hero’ and Oisin McKeogh from Killaloe, Clare for Direction for his film ‘Ode to a Dancer’.

14-year-old Sean Tracy from Ashford in Wicklow took home the title of Ireland’s Young Senior Filmmaker of the year 2019 for his short film ‘Rue’, a story about a boy who regrets his last words to his best friend.

Cal Arnold O’Driscoll from Dublin was the second place winner for his film ‘Big Bad World’, in which two Irish teens from the 90s finally break the rules by going on their very own vacation.

Milosh Hughes, from Malahide in Dublin took home third place for his film ‘Descensus’, in which a young boy loses his grip on reality as constant nightmares cause him to spiral into madness.

Fresh Film Festival encourages young people from Ireland and overseas, aged 7 to 18 years, to create, exhibit and share films.  The festival provides an opportunity for these young filmmakers to have their work seen on a cinema screen for the first time and to compete for the title of Ireland’s Young Filmmaker of the Year.  All films submitted are also considered for a range of Specialist Awards including the Radharc Trust Award (documentary), the Boulder Media Animation Award, the RTE 60 Second Short Film Awardand the RTE Factual Award, in addition to the International and Audience awards.