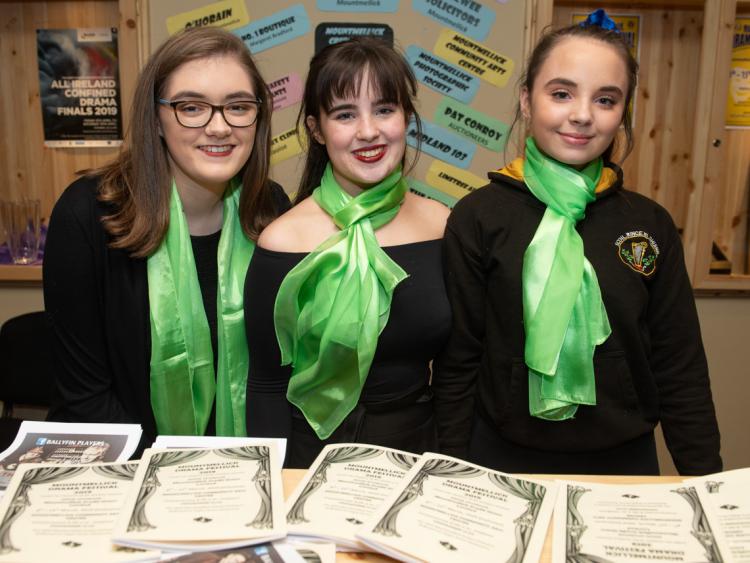 On duty at the Mountmellick Drama Festival.

As expected Mountmellick Drama Festival 2019 left nobody feeling dissappointed as eight of the finest amateur drama groups in the country decended on the Community Arts Centre.

The groups battleed it out for points and a place in the prestigious RTÉ All Ireland Open Finals in Athlone and the Confined Finals in Doonbeg.

Already, all of the four confined groups seen in Mountmellick are topping the league table and have firmly secured a spot in the finals, proving yet again the calibre of the festival.

There was no shortage of hilarious comedy, flights of fantasy and family drama, ensuring that there was a play to suit every audience, and, come in their droves they did, as Mountmellick Drama Festival is now firmly on the map as one of the “must do” Spring events in the Midlands .

Festival adjudicator, Donal Courtney proved popular with both audience and participating groups and his opinion and advice was well received.

So impressed was he with the beautiful venue that he is returning to the Balcony Theatre on 12th April to perform his own play, “God Has No Country” which tells the true story of the war-time exploits of Hugh o’Flaherty, aka Ireland; Oskar Schindler. (More details on page 47).

The committee are extremely grateful to Mr Colm Heslin and staff of Mountmellick Credit Union for their continued generous support as the festival’s main sponsor and to all the sponsors, advertisers, patrons and friends without whose support the festival could not exist.

1st : Dalkey Players – The Mill on the Floss, by Helen Edmundson