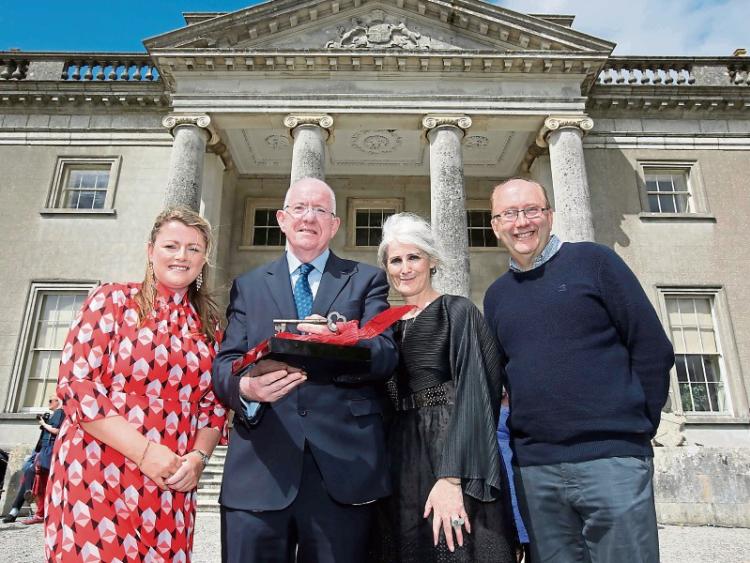 Up to now it was a case of upstairs-downstairs in the Gandon-designed Emo Court, former seat of the Earls of Portarlington.

The hoi polloi were permitted on to the ground floor. But upstairs was out of bounds.

Laois TD and Justice Minister Charlie Flanagan changed that on Sunday (May 26) when he officially opened the newly-renovated first floor to the general public to mark the 25th anniversary of the state’s acquisition of the impressive mansion.

On the floor are the main bedrooms with magnificent views of the gardens and parkland- views that were at one time the prerogative of the privileged few--(and, course, their factotums) - and their guests. According to Minister Flanagan, these included the Duke of Wellington. This year is the duke's 250th birthday.

And nearby resident Wilfred Deverell, who was accompanied by his wife Ingrid, suggested that Queen Victoria had expressed an interest in buying Emo Court for her son Edward, Prince of Wales. (Later King Edward V11). Seemingly, she believed that such a rural retreat would help to keep him out of trouble, to which he was prone.

Wilfred was executor and a trustee of the estate of Major Chomley Harrisson. He acquired Emo Court from the Jesuits in 1969 and bequeathed it to the nation in 1994. Nearly 100, he died in 2008.

Among the guests at the ceremony was Tom Jacob, the Portlaoise-based former County Councillor. He told of how, in the early 1990s as Chairman of the Midland East Tourism Authority, he had encouraged the Major to cede Emo to the state.

The Jesuits bought Emo Court in the 1920s and probably the most famous member of the order to reside there was Fr Frank Browne, a photographer of genius.

Striking examples of his work were displayed on the first floor during the opening festivities. Also shown were paintings by 39 artists and James Gandon’s original blueprints for Emo Court.

Centrepiece of the house is the splendid Rotunda now also restored to its original glory. Minister Flanagan revealed that 1.2m euros from the Rural Regeneration and Development Fund had been allocated to Emo Court. The next phase of the project would concentrate on the basement, he revealed.

On duty at the ceremony was head guide Martina Lewis and her colleagues Jane Phelan, Margaret Bennett and Kevin Flanagan. Also there was head gardener Valerie Cloonan. The Minister paid tribute to them all and to everyone responsible for the care of what he described as “one of Ireland’s finest heritage sites.” In total, around 15 local people work on the estate.

Their responsibilities include the elegant Wellingtonia Avenue, where Minister Flanagan planted a tree. As a memento of the occasion he was presented with a key to Emo Court by little Clara Bannon Mateus. Her mother Joanne is an OPW official.

Blending in perfectly with the ambience of Emo was a horse-drawn carriage owned by Ian Hyland, from Clough. He and his daughter Tina are proprietors of Aghaboe Carriages. They and ‘Whitey’, the horse, were kept very busy. Vintage cars also added an authentic touch.