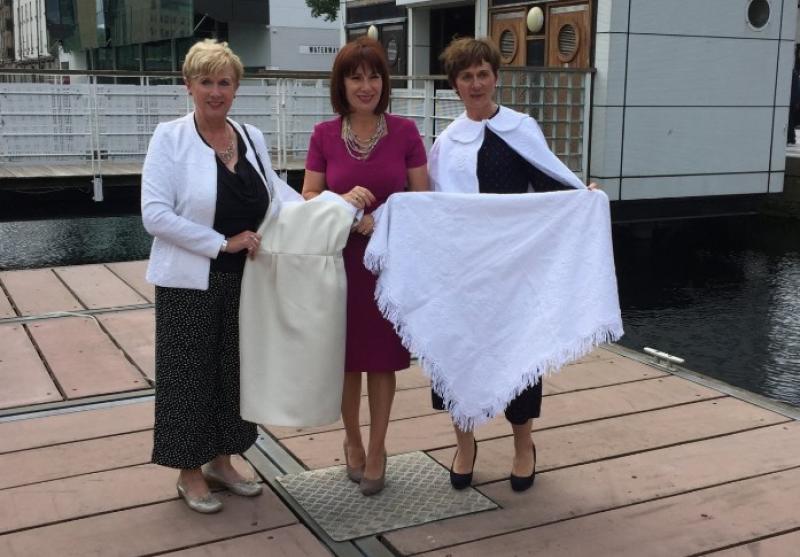 At a function in Dublin Mountmellick Museum members Ann Dowling and Anne Sands were present for Minister for Culture, Heritage and Gaeltacht Josepha Madigan TD

A Laois craft has been placed alongside hurling, Irish traditional music on the National Inventory of Intangible Cultural Heritage.

Minister for Culture, Heritage and the Gaeltacht Josepha Madigan TD officially launched the Inventory in celebration of living cultural heritage practices in Ireland.

A statement from her Department said this measure represents official State recognition of cultural practices all around Ireland and will serve to protect and promote these practices for generations to come.

The elements of Ireland’s cultural heritage practices on the list were received through an open call process and were assessed by an expert advisory committee. Mountmellick is the only true authentic lace of Ireland.

Charles Flanagan, Minister for Foreign Affairs and Trade, presented Prince Charles with a piece of Mountmellick Work during his historic visit to Ireland.

Thread Softly Festival of Stitch will celebrate the legacy of the Quakers and Mountmellick Embroidery Lace on international lace day, the 28th and 29th September 2019.

A collaboration between well-known Irish designer Caroline Mitchell and Dolores Dempsey from Mountmellick culminated in a beautiful piece of work which was modelled at the recent Council of Irish Fashion Design and Design Council of Ireland fashion show in Dublin. Here is the official video of the dress. More below the video.

"It is wonderful to see such a variety of customs and traditions from all over the country being acknowledged," said the Minister at the launch.

"Each of these threads in the cultural tapestry of our lives makes us richer as individuals and as a country. None of this would be possible without the work of committed volunteers all around the country, whose involvement in their communities’ cultural practices and heritage traditions have sustained them over the generations.  I am delighted to honour those customs, practices and traditions through official State recognition on the National Inventory," she said.

Her Department said the development of the National Inventory of Ireland’s Intangible Cultural Heritage is an integral part of the Department of Culture, Heritage and the Gaeltacht’s work under the 2003 UNESCO Convention for the Safeguarding of the Intangible Cultural Heritage which requires signatory countris to recognise, protect and promote the living cultural heritage of their countries.

To ensure a comprehensive National Inventory is achieved, expressions of interest will continue to be accepted on a rolling basis: Interested parties can contact the Department at nationalich@chg.gov.ie for more information.