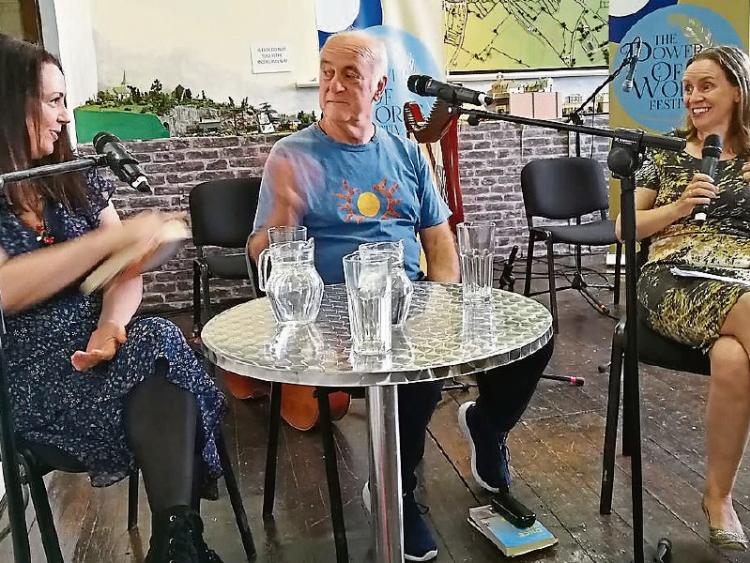 The weekend dates have been announced for the second annual Power of Words Festival (POW) 2020 in Abbeyleix following its hugely successful inaugural year in August 2019.

The festival celebrates the power of words through words written, spoken, acted and sung and featured some huge names in the world of literature last year.

The family-friendly festival dates for this year’s event are Friday to Sunday, August 14-16.

Many authors, poets and singers and personalities took part in last year’s festival reading from their own works, singing, craic agus ceol, creative writing workshops for children and adults alike and each celebrated the work of playwright, author and poet Pat Ingoldsby through the Living Poets Society.

Playwright Amanda Kelly from Abbeyleix dreamt the event into existence over the Christmas period in 2018.

Recently Ms Kelly along with other team members visited Pat in Clontarf Dublin where he lives to present him with an award on behalf of the festival.

“Pat was delighted and said that he felt really honoured that his work was celebrated during the Power of Words Festival last year. He was thrilled when we presented him with the Inaugural Recipients of the Living Poets Society plaque award that we had made especially for him,” she said.

Ms Kelly said that the Power of Words team want to announce the dates for August early so that people can plan their holidays as many families came from near and far to enjoy the fun-filled festival last year.

“We are at the early planning stages now but we will have many interesting and enjoyable events over the weekend to suit people of all ages and palates.

“ We will be keeping the same format as last year as everyone had a great weekend and really enjoyed themselves. The wonderful heritage town of Abbeyleix was buzzing with excitement. We are not looking to be bigger or better than last year rather we want the event to be as good as last year’s.” she added.

The organisers thanked the many people involved in last year's festival on their website.

“Firstly, we wish to thank everyone who came along to ‘The Power of Words

inaugural year. We would not be heading into Year Two without the enormous

levels of kindness and help we received in 2019,” said the post.

To see all how helped organise and supported the event and to keep up with The Power of Words Festival updates check Facebook or visit the event’s website www.powerofwords.ie.