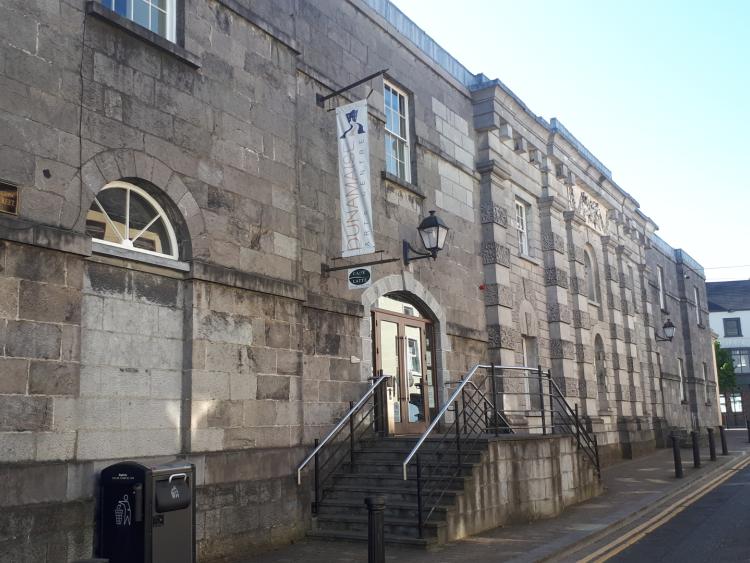 The Dunamaise Arts creative team os looking forward to "Fabulous February" with the launch of the 'Dunamaise on Air!

The team has compiled a brand new series of podcasts called 'A Word in Your Ear' as well as new cultural films and a play by the award-winning theatre company Druid for you to stream.

“We've been working really hard over the past months on finding ways of connecting artists and audiences and we're so happy to be able to send the arts home to you until we can be together again.

“We hope we can bring some enjoyment to you and/or your family and friends.

"We hope you enjoy our new On Air events and we'd love to hear from you too so please feel free to drop us a line and let us know if we can help in any way," said the team.

The team says you can to listen to ‘A Word in Your Ear’, a series of short plays via podcast from Thursday, February 4 and each week until February 18. The plays which were recorded on our stage in 2020 were written by Laois writers and performed by actors from local drama groups.

The plan was to perform the plays on the stage for audiences, however, due to Covid-19 escalations and restrictions, the decision was made to prepare them for podcasting.

The first plays to be podcasted this Thursday, February 4 at 11am are:

Jimmy Written and directed by Colette Wrafter with cast members Joe O’Neill, Rory Corcoran as well as Colette herself and music paradoxes and palindromes by Blueberry Rouge.

The remaining plays ‘Where the Truth Lies’ by Frances Harney and ‘Decisions’ by Sheelagh Coyle will be podcasted on Thursday, 11th February and ‘Rita, Sue and Dad too’ by Joe Murphy and ‘What’s in a Name’ by David Corri on Thursday 18th February.

“Creative Ireland Laois’ funding commitment was so valuable in supporting the writers, even at a distance, and we were glad to link them with our audiences and creative participants”, said Michelle de Forge, Director of Dunamaise Arts Centre.

“The writers and actors adapted brilliantly to online mentoring and rehearsals. While we had hoped to bring them together with live audiences, we were delighted to capture their creativity in this format and that they agreed so enthusiastically to adapt them for podcasting! Online streaming is very new to us at Dunamaise but it was actually a really fun experience to have the participants come in for audio recordings last December”.

“We can’t wait to have live audiences back again later in the year, all going well. And while nothing replaces the energy exchanged between a company of actors on stage and a live audience gasping, laughing or tearing up in unison at live theatre, we’re so glad to have this means of connecting our wonderful creative talent in Laois with our well-loved and heartily-missed audience members. We are grateful to our funders, Creative Ireland Laois, Laois County Council and the Arts Council; to Writer-in-Residence David Butler; to the playwrights and actors and to the Dunamaise team for bringing the podcasts to life in ‘Dunamaise on Air'", said Michelle.

With thanks to Creative Ireland Laois, the Arts Council and Laois County Council in funding this initiative. Music composed and performed by Pianoman Tom listen here.

Click here to listen to 'A Word in Your Ear'

So what else is on?

‘Falling’ will be the first of four films we plan to stream from www.dunamaise.ie over the coming weeks. Just two months since its UK release date and set to be released in the US this week, the team say they are thrilled to be able to stream this incredible film which is actor Viggo Mortensen's directorial debut! more below picture 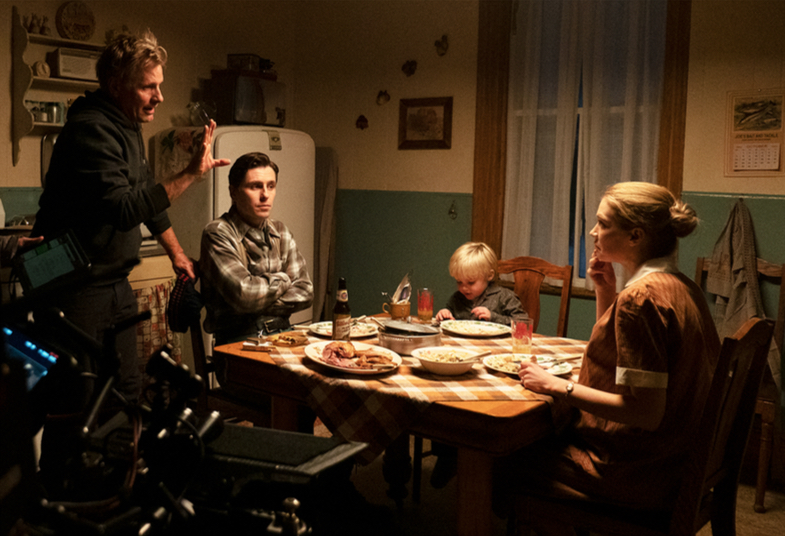 The stunning film written by and starring Mortensen as John Peterson, is about a middle-aged gay man whose conservative and homophobic father Willis Lance Henriksen starts to exhibit symptoms of dementia, forcing him to sell the family farm and move to Los Angeles to live with John and his husband Eric.

The Art’s Centres friends at Druid in Galway present a new play Once Upon a Bridge by Sonya Kelly and directed by Sara Joyce, live-streamed from The Mick Lally Theatre, Galway from 11th to 13th February.

Inspired by real events, this show weaves a tale about human triumph and frailty, about the power of destiny and chance, why sometimes we choose to hate and other times we choose to dance! A wonderful chance to see live theatre streamed directly to your home.

Tickets from €15. #savethearts Book 'Once Upon a Bridge' HERE

Also, Artist Rennie Buenting is a visual artist who connects her audience to the artistic, heritage and cultural realm. Her winning piece “Joya’ was created during an artist’s residency in Spain in March 2020, using clay from the mountain as well as acrylic, marble and limestone powder in her painting and adding a song about Covid news while there. Don't miss this and so many other beautiful pieces in his exhibition HERE.

With thanks to The Arthouse in Stradbally for their support for the prize of a one-month residency for our winner.

The Dunamaise also hope you catch up with its weekly Life Drawing Classes which are run by our Artist-in-Residence Rebecca Deegan, as they are now virtual via Zoom and you can still take part each Thursday. No charge for these but please donate what you can and you will support artists, models and Dunamaise Arts Centre.

The team is working remotely but phones and emails are diverted!

Further information about the A Word in Your Ear playwrights:

Dan is a writer, director and actor for the Clodiagh players. In 2019, he directed The Lonesome West, with Mullingar Theatre Lab and helped take it to the final of the all-Ireland where it went on to perform in Frankfurt, Germany.  Dan constantly writes and is waiting to have his musical "Sally's Place" produced. Set in New York, he hopes to bring some glitz and glamour back to the stage when this virus has taken it's final bow. Dan has regular zoom calls with fellow actors to keep sane during the pandemic.

Jimmy was written by Colette Wrafter She holds a BA in Design for Stage and Screen, Production Design from IADT, and recently graduated with an MA in Broadcast Production. Her first play was chosen to be part of the Scene and Heard Festival in Smock Alley Theatre (2019) Colette was nominated for the Headline Student Journalist Award with a radio piece that took a deep dive into both the pervasiveness and lived realities of mental illness and disability in the prison system in Ireland. She is currently in preproduction of a short film to be shot in Portlaoise.

Frances Harney, Writer and Director of Where the Truth Lies

Frances Harney is a retired primary teacher who lives, with her husband Liam, in Ballyfin. She is an examiner with The Leinster School of Music and Drama and the in-house storyteller at Ballyfin House Hotel. She has given drama workshops in many third level institutions and Education Centres and has directed cultural events for Laois County Council.

Frances runs a very successful speech and drama school and has written and directed over 30 plays for children and teenagers. Many have been performed in Dunamaise Arts Centre. She also writes and directs, large cast, full length comedies for her local drama group 'Ballyfin Players'. Her memoir piece 'Keeping in Touch' has been published by Harper Collins in the compilation ' A Day from My Life'. She has also had short stories published by The Leinster Express.

Sheelagh Coyle is a native of Athlone but has lived in Mountmellick since 1974. She first became involved in drama with the Macra na Feirme Drama Group where she took part in many one act and three act productions as an actor and director and won some acting awards at the Laois Drama Festival.  In recent years she joined the Ballyfin Players under the direction of Frances Harney. Her play ‘Decisions’ tells her own personal story following a cancer diagnosis in 2004. Sheelagh plays the main character, Julia, in the play with contributions from three other characters.

Joe Murphy, Writer and Director of Rita, Sue and Dad Too

I've been involved in amateur drama for more years than I care to remember with Laois groups Open door and Fourth Wall and others in too many productions to mention. I've preformed on the wonderful stage of the Dunamaise theatre for several years. But writing is a relatively new interest for me. I've always loved comedy and particularly tv sitcoms. Whether it's the classic US shows like The Mary Tyler Moore Show and Frasier or the BBC shows like Fawlty Towers and Dad's Army. So this is my attempt of sorts at a homage to those great shows. I've learnt a lot from the expertise of David Butler and my talented fellow participants in great venture. Thanks to all involved. Joe Murphy.

David Corri, Writer and Director of What’s in a Name

David Corri is a Dubliner but married into the Slieve Blooms and lives in Portlaoise with his wife Siobhan and daughter Eimear.  He is a stage director and actor with Fourth Wall Laois Theatre Group. He has previously directed and played with Open Door, Porterhouse Players, Droichead Nua Players, Reps (Harare) and the Little Theatre (Dar-es-Salaam).