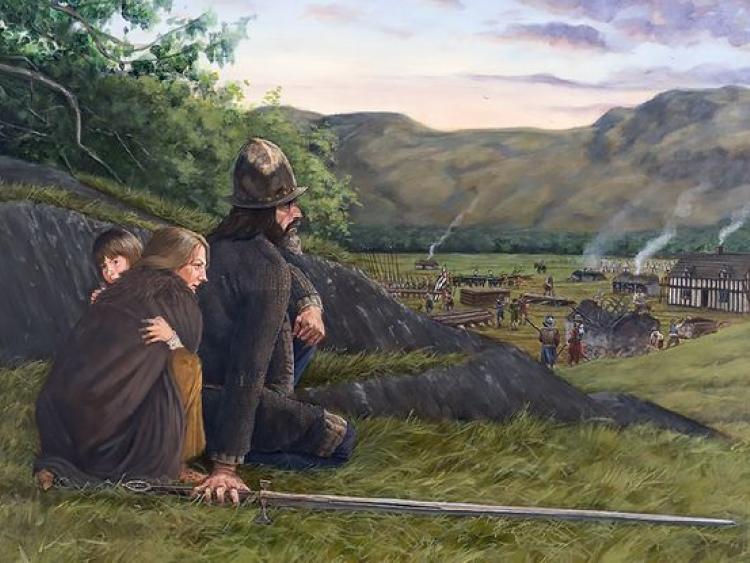 A Gaelic family look on as the English Plantation takes shape

A LECTURE on the plantation of Leix and Offaly during the Tudor period will take place via Zoom tonight (Monday, March 22) at 7.30 pm.

The lecture, entitled “We adore chaos because we love to produce order”: 'English colonialism and the Leix-Offaly Plantation’, will be given by Dr Diarmuid Wheeler.

Email Offaly History at  info@offalyhistory.com  for the link and mark your email as Zoomlecture

The origins of the midlands colonial project can be traced back to the early sixteenth century when the Tudor government, who firmly believed that Ireland rightfully belonged to the English crown and that the country’s keeping was essential to England’s overall safety, sought to restore the island to its twelfth century “conquered” state from which the crown hoped to profit.

The Tudor government decided to shire the Gaelic lordships of Leix and Offaly and extend English common law and language as well as the Protestant reformed faith throughout the region so as to bring it to ‘civility’.

In other words, remodel the midlands in the image of England. What the government failed to realise was that the great majority of Ireland’s native inhabitants had little interest in partaking in such a scheme and were bitterly resistant to any form of English encroachment on their domains.

The end result was decades and eventually centuries of war, famine disease and devastation. Dr Wheeler’s talk will examine how the plantation ultimately shaped Offaly and the midlands region as a whole as well as the effect it had on the natives of the area and their English counterparts.