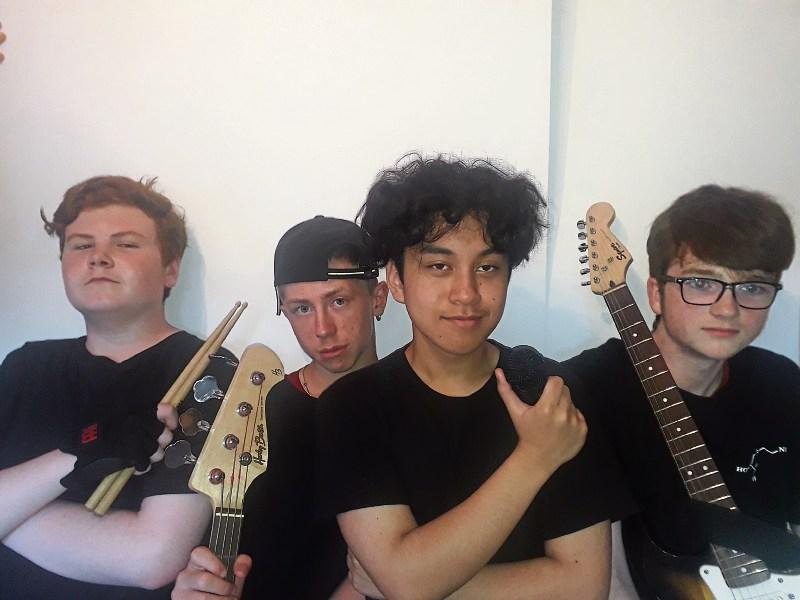 Dopamine are days away from their first ever live gig when they hit the ‘Forge’ stage at the Anvil Inn, Portarlington.

They’ve spent the whole of lockdown practising and writing individually and rehearsing over video link to produce an EP independently in July 2021.

All the lads are in 3rd year at Colaiste Iosagain, Portarlington and even though it is an exam year, they have managed to find the time to rehearse and perfect their own written music as well as a selection of Rock Anthems.

“We write and perform a mid-Rock music with our own twist”, said Juan Miguel.

“All band members contribute to the writing of each track which gives us a great mix of sound”.

Kris Gavin stated: “After the success of the E.P. We felt the next step on our journey was a live performance in our hometown”.

To add to the excitement and nerves of the big day, the lads are shooting scenes for a music video on the day. There will be two camera operators there on the day to shoot sample scenes for forthcoming releases, “Last Night”, “Whale Song” & “Mauve” which the lads will perform for the first time at the gig on the 23rd.

When asked about the pressure of the first live performance, Sudsy said: “It’s going to be a nervous time, the live performance coupled with the video shoot and the addition of all our friends, families and neighbours being there will give us added pressure, but we have rehearsed long and hard and feel that we will pull off a great gig for everyone to enjoy”.

The Anvil’s, Eoghan Coffey is looking forward to hosting the concert.

“We are delighted to help young local music talent, given the young age of the lads, we decided on the early time on 4pm for the session, we look forward to welcoming them and the video crew on the day”.

The lads are very excited and geared up for the gig. “It will be a new experience for us, and we hope for the audience as well” stated Sean Fleming.

He added: “Years of practise have gotten us to this point, and we are improving on our instruments all the time”.

Three of the four lads have learned or improved their specific talents at the “B Sharp Studios music school, Portarlington”.

Conor Mitchell is director of the school and a teacher of theirs in Colaiste Iosagain.

“They are a fantastic group of young, talented musicians. I had the pleasure of listening to them in their studio and I was blown away by the quality and standard of music these four young men are producing. Fantastic to see the support they have been given by their parents to pursue their dream. “I know the students from Colaiste Iosagain and three of them from B Sharp Studios. They are an inspiration for all young musicians in the town and further afield. I am looking forward to their first live gig soon,” he said.

The lads practise in Sudsy’s “Tyne Shrine” at the back of his house in Portarlington. The band are currently without a label and are self-funded.

If you would like to support them and have an enjoyable afternoon’s entertainment, then October 23rd, 4pm is a date for your diary.