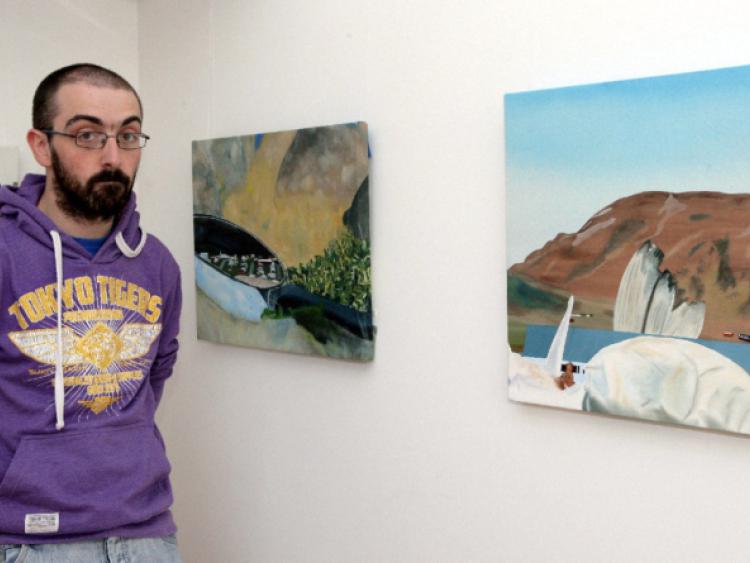 Donaghmore native, artist Pat Byrne went on the adventure of a lifetime to Iceland for a three month artist residency last year and recently exhibited the results of his work in an exhibition titled ‘Excursion’ at the Arthouse in Stradbally.

Donaghmore native, artist Pat Byrne went on the adventure of a lifetime to Iceland for a three month artist residency last year and recently exhibited the results of his work in an exhibition titled ‘Excursion’ at the Arthouse in Stradbally.

Pat travelled to Skagastrond, which is a coastal town about three hours north of Reykjavik for the months of June, July and August, 2012.

Pat stayed in the town with a population of about 500 people as part of the Nes Artist Residency, which houses artists from all over the world. Using the beautiful and expansive landscape around him for inspiration, Pat worked in the studio to create his latest body of work.

“The studios were communal and were one big space so we were able to bounce ideas of eachother. There were about 13 or 14 artists there each month, lots from America, and from all over Europe as well. There were also open days where people would visit from other residencies in the area”.

At that time of the year Iceland experiences 24 hours of daylight which Pat said took a while to get used to.

“I was working in the studio thinking that only a few hours had passed, and then I would look at the clock and it would be 1am. But it would still be so bright. The light was very intense there”.

The weather was also kind to Pat when he was there, with temperatures between 15 and 20 degrees.

“We only had mabye five days of rain over the three months and the weather was savage”.

Pat said that although many aspects of life in Iceland were different from home, he still found some familiar things.

“On my first night in Iceland, I was in Rekjavik and I went into an Irish bar for a drink. It turned out that the bar owners brother is living in Rathdowney. There was also a radio station called Rebel FM which broadcast Irish rebel music 24 hours a day. I met some people who were also big fans of The Dubliners and Luke Kelly”.

The coastal town is quite remote, and fishing was one of its main industries. Pat found the locals quite friendly, and some of them give him and the other artists lifts when they was travelling out of town. He also enjoyed their local festivals - one a fishermans’ festival and the other a country and western festival, which gave a real flavour of the town.

“There was a really strong community there, everyone was out all the time looking after their area. Everyone seemed to be busy working as well. They told me that artists residencies are huge for their local economy. They are really proud of their Viking heritage and they love the Irish”.

Pat said that the residency was a fantastic experience and that he would love to travel back again.

“I thought I would be homesick but I fell in love with the place. It was so surreal that I really settled in. I don’t think we realised how isolated we were until we got there. But I am hoping to go back at some stage”.

“I was so excited when I saw the new work. Pat had previously worked on the NCAD graduate residency here in the Arthouse and his work was largely abstract. This is a real departure. Professor Declan McGonagle, director of NCAD told us when Pat first approached us in 2011, that Pat was a young graduate with a lot of potential”.

Originally from Donaghmore, Pat studied painting in Galway and is currently completing a Masters in painting in NCAD, as well as working on new pieces. He is also an Artist in Residence in Mountrath. Visit patbyrne86.blogspot.ie.