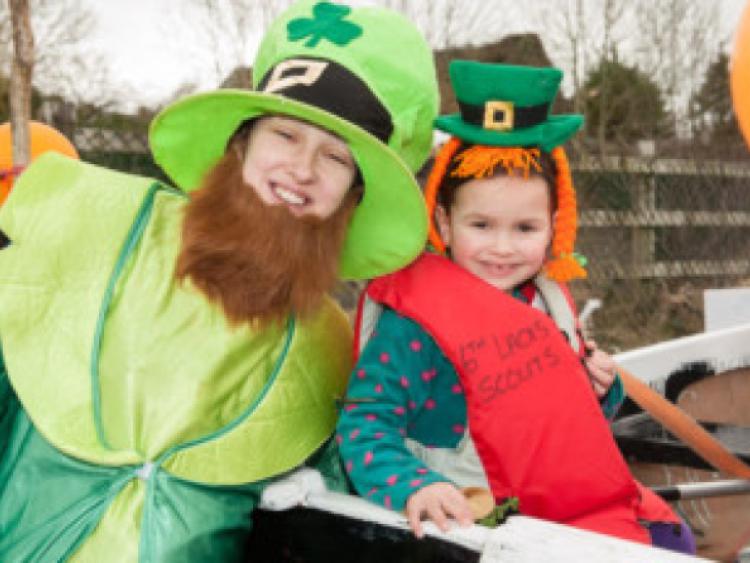 Mountrath was awash with green, white and gold last Sunday when the town held its St Patrick’s Day parade.

Mountrath was awash with green, white and gold last Sunday when the town held its St Patrick’s Day parade.

A large crowd gathered to watch the parade, and despite threatening all morning, the rain held off for the festivities.

Before the parade began, a minute’s silence was held for the late David Fitzgerald, who was killed in a car accident last week.

MC for the proceedings was Johnny Purcell and the parade this year was led by the Irish Red Cross. St Joseph’s Accordian Band shared their musical talents on the day and got everyone in the festive spirit.

There were colourful floats from Molly Maguires, and from Tots and Co, with some princesses spotted walking in the parade.

Mountrath Childrens’ Playground and Mountrath Community School were also vibrant, as were the young dancers from Scoil Rince Ni Fhaolain, who were all dressed in red.

The Beavers and Scouts group from the town also marched, and displayed their scout boat and a canoe.

The talented children from St Patrick’s BNS also provided music with their marching band. Raheen Vintage Club displayed some of their vehicles, as did Camross Vintage Club who also let people know about their novice ploughing day on March 30.

The Camross High Nellie group were kitted out in black and amber, and came out in large numbers.

The Cosy Cafe whetted peoples’ appetites with a pretty float and plenty of scones and treats on display.

Floral Visions also had a very colourful float, decked out with blossoms of all types. Carroll’s Costcutter also participated, as did Eddie Phelan’s chipper, Ryanfreight, and CJ Sheerans.

Mountrath Kettlebells were represented on the day, as were Tom’s Bar and Centra, who were Laois players for the day.

As well as the parade festivities, the square was also closed off with lots of activities for young and old. There was music playing during the afternoon and a wide variety of bouncy castles, as well as a climbing wall to keep the younger viewers happy.

Many businesses and locals in the town also came together, and the square looked very cheery with lots of colour.