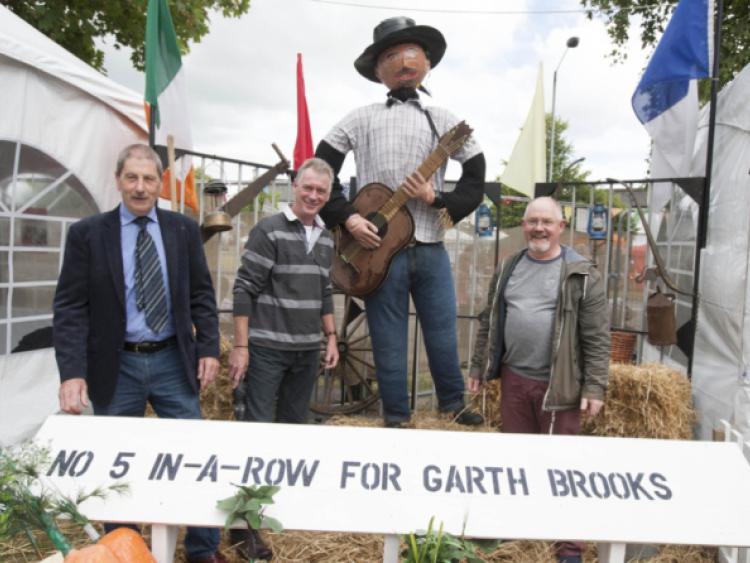 There was not a crow to be spotted for miles around Durrow yesterday Monday August 4, as the week long Scarecrow festival ended on a high, with 32 scarecrow winners announced out of over 100 entries.

There was not a crow to be spotted for miles around Durrow yesterday Monday August 4, as the week long Scarecrow festival ended on a high, with 32 scarecrow winners announced out of over 100 entries.

Most humorous award of €125 was scooped by Ali Conroy, for her creation of ‘Miley Silage’ swinging on a silagebale, which grabbed nationwide attention. Overall prize of €500 went to Hugh Sheppard for his entry ‘Anger management’.

“We had 32 prizes because we wanted to cater for every category. 25 of the scarecrows were made by children. We did a workshop in schools this year to show them how easily they can be made, they were so proud putting up their entries,” said organiser Evelyn Clancy.

Along with the scarecrow trail around the town, a multitude of events was crammed into the busy week. Workshops were on everything from composting to nail art. There were arts, crafts, a treasure hunt, live bands, high nellies, family games, a teddy bears picnic and a duck derby.

Yesterday IWW wrestlers, a ‘Woof and Wellie walk’ in support of Cara Rescue, and live theatre performances rounded off the variety filled week.

Despite the unceasing downpours on Saturday, the festival was the busiest yet, with record crowd numbers and nationwide media coverage, said Ms Clancy.

“It went great, we had a fantastic day on Sunday, with 4,600 visitors to the village alone. We know we are up on crowds already without counting. The whole village was hopping, there was a great atmosphere and everybody’s comment was how family friendly it was,” she said.

Some of the proceeds of the festival will be put towards the rejuvination of Durrow Square by Laois County Council, and the rest ploughed back into next year’s scarecrow festival.

“We are very proud of the fantastic community effort, we have over 100 volunteers. Some people take a week’s holidays off work to help, so many people are willing to do their bit,” said Ms Clancy.