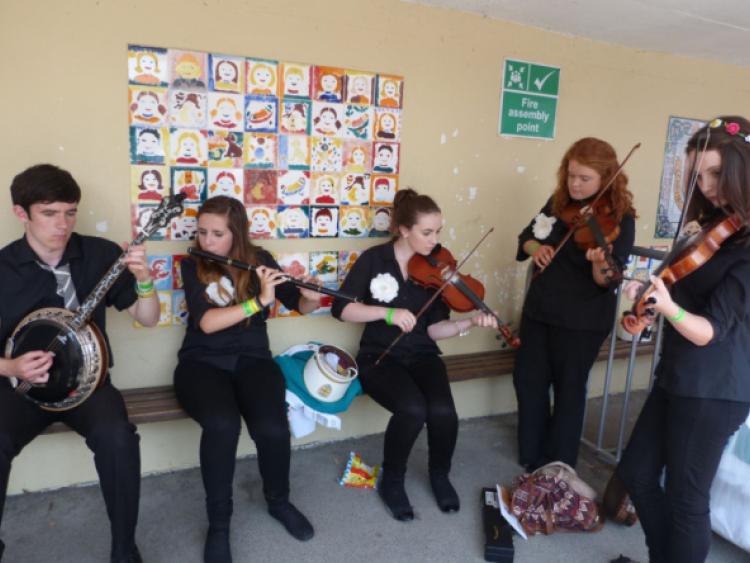 Portarlington Comhaltas has its largest entry ever in this year Leinster Fleadh Cheoil resulting in competitors qualifying for 18 competitions at the All Ireland Fleadh to be held in Derry in August.

Portarlington Comhaltas has its largest entry ever in this year Leinster Fleadh Cheoil resulting in competitors qualifying for 18 competitions at the All Ireland Fleadh to be held in Derry in August.

The three Laois champion ceili bands, the u/12 Corrig, u/15 Roscarrig and the u/18 Ard Glass all competed on the day with the u/15 Roscarrig securing the Leinster title yet again & qualifying for the All Ireland Fleadh Cheoil in Derry

Competing in the fiddle competitions were Ciara Faherty u/12, Senan Moran, Ciara O’Donnell & Mary Dunne u/15, Mary O’Donnell u/18 & Katie Dunne & Noel Brennan 0/18. Both Ciara Faherty who came 1st in the u/12 fast tunes & 1st in u/12 slow airs & Senan Moran u/15 qualified for the All Ireland Fleadh Cheoil.

Representing the branch in the two row button accordion was last years All Ireland champion, Diarmuid Faherty who was competing in the u/15 competition for the first time and Ryan McCarthy in the u/15 & Eimear Gill in the u/18 competition. Both Ryan & Eimear qualified for the All Ireland Fleadh when they were placed 2nd in their respective competitions.

Flute competitors Ailis O’Donnell u/15, Roisin Fenlon, Sean Faherty u/18 & Kate McManus & Cliona Coughlan 0/18 competed in their respective age groups but were not successful in the fast tune section, however Ailis O’Donnell narrowly missed out on qualifying when she secured a 3rd place medal in the u/15 slow airs competition.

The branch has previous Leinster champion banjo player Cathail O’Connor competing in the u/18, competition with newcomer, John Tobin in the u/18 also & Alasdair McCann in the o/18. Alasdair narrowly missed out on qualification and was awarded 3rd place medal.

Ciara Faherty competed in the u/12 Mandolin competition and secured a 1st place unfortunately neither Cathail O’Connor who came 3rd in the u/18 or Alasdair McCann in the o/18 was successful.

We had two competitors in the Piano competition, Diarmuid Faherty, who took 1st place and Senan Moran; both were successful in qualifying for the All Ireland Fleadh

We had two competitors in the harp competition; Cillian Moran u/12 & Clare Faherty u/18, both were unsuccessful in qualifying for the All Ireland Fleadh

In the melodeon competition, last year’s u/12 All Ireland Champion, Diarmuid Faherty secured 1st place in the u/15 with Clare Faherty giving a good account of herself in the u/18 and winning a 1st place medal also.

In the ceili drumming competition, we an excellent outcome when both Daniel Delaney & Sean Faherty qualified in the u/18 with Daniel securing the Leinster u/18 title, previous years he won both the u/12 & u/15 titles. Last year’s All Ireland champion Diarmuid Faherty competed in the u/15 age group for the first time where he added the u/15 title to his long list of drum achievements.

In the accompaniment competition, both Senan Moran in u/15 & Clare Faherty u/18 were awarded 3rd place medals.

In the miscellaneous competition u/12 Ciara Faherty secured a 1st place medal with her brother Sean narrowly missing out on being place in the u/18.

Neither Mary O’Donnell & Eimear Gill or Sean & Clare Faherty were successful in their efforts to qualify in the duet competition, but both groups were happy with their performance on the day.

Competing in the u/12 trio competition and giving a good account of themselves was Ciara O’Donnell, Ailish O’Donnell & Roisin Doheny. Success came the branch’s way when the u/15 trio of Mary O’Donnell, John Tobin & Eimear secured a 2nd place and qualification for Derry.

Our one and only singing competitor, Fiadh Fitzpatrick gave a brilliant performance on the day in the u/12 competition and was highly commended by the adjudicator.

Diarmuid Faherty competing for the second year in the new composition competition was awarded a 3rd place medal.