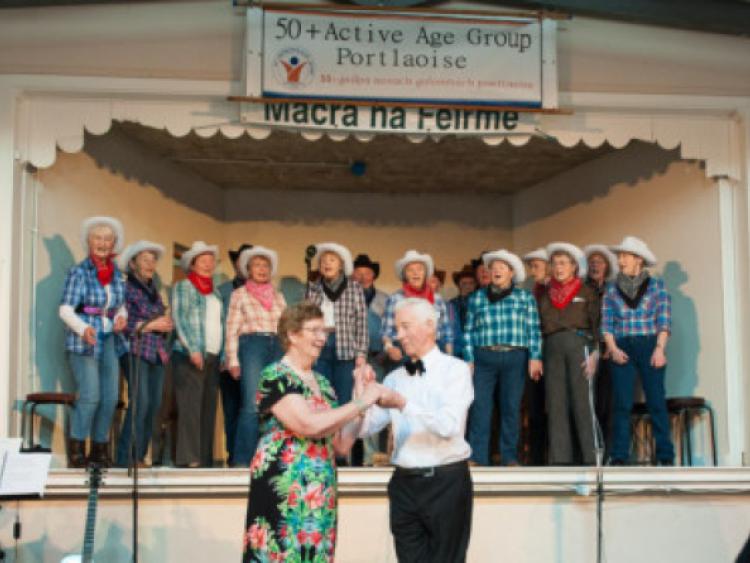 It was ‘Yeehaw’ last week as the Active retirement Group in Portlaoise celebrated the 10th anniversary of their formation.

It was ‘Yeehaw’ last week as the Active retirement Group in Portlaoise celebrated the 10th anniversary of their formation.

Host Jimmy Keenan kicked off the Country & Western show where there was a wide range of entertainment on offer to a packed crowd in The Macra Hall, Portlaoise – with people coming from all areas of Laois on Wednesday, April 23.

All decked out in authentic cowboy style outfits– the group performed various songs, and sing-a-longs with Billy Phelan on Banjo. These were then followed by individual performances from Laura Kilkenny & Peter O’Sheas infamous rendition of Ghost Riders in the Sky.

Recitations from Mary O’Shea, John McAuliffe and Bernadette Downey went down a treat, and as the line dancing began, the audience participated with gusto, clapping and singing along. A comedy sketch “Operation” which was written and produced by one of the members Paddy Lalor, brought the house down with laughter.

You could see how much dedication had gone into the rehearsals, all guided by Dance instructor Maureen Culleton, and musical director & choreographer Nula Kelly, with Mary Wisley on Piano.

This was then followed by a raffle and the official cutting of the Special Cake by President of the ARA Mae Quaide, with refreshments and a selection of delicious home baking for all in attendance.

New members are always welcome, and the group meet every Wednesday at 3pm in the Parish Centre.