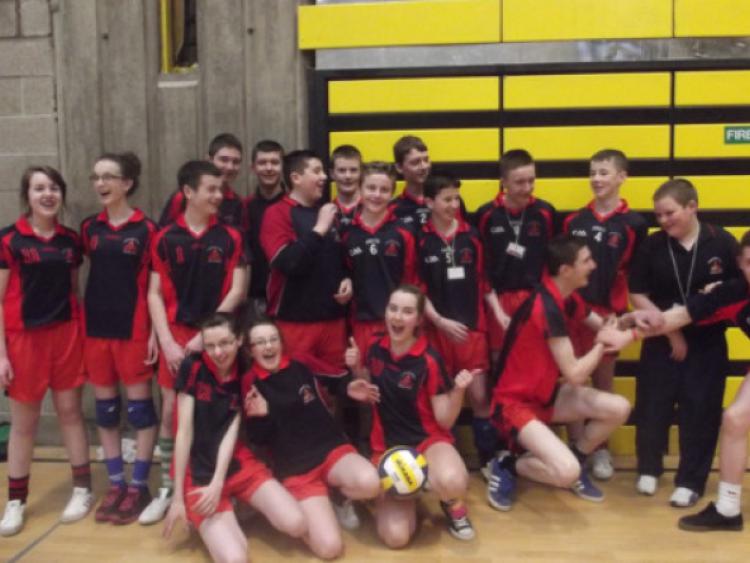 THE Mountrath Community School second year mixed spikeball team made history on Thursday February 28 when they became All Ireland Champions.

THE Mountrath Community School second year mixed spikeball team made history on Thursday February 28 when they became All Ireland Champions.

They travelled up to University College Dublin to play in the National Spikeball Finals.

They came second in the pool stages and then progressed to the All Ireland semi final where they met 2012/2011 champions Dungarvan.

It was a competitive match between the two teams which went to three sets.

Mountrath won the first set and Dungarvan won the second. It was all to play for in the third set which was up to fifteen points.

Consistent serving from Jack Corr and hard hitting from Stephen Dunphy ensure that Mountrath earned a place in the final.

They bet Dungarvan in the third set 15-7.

In the final Mountrath came up against St Brigid’s from Loughrea. St Brigid’s had beaten Mountrath in the pool stages so they knew they game would not be easy. Mountrath won the first set easily with accurate setting from Sarah Bennett and great defence from Aoife Finlay.

The final was the best of three sets so Mountrath knew if they won the second set that they would be All Ireland champions. The second set was not as easy as the first. St Brigid’s blocked Aaron Dunphy numerous times.

Mountrath knew they had to change the game plan.

Dunphy went back on court and tricked St Brigid’s defence. As he went up to attack a high ball he dumped it right over St Brigid’s blocker. Dunphy continued to confuse the Loughrea team and brought the score line to 19-19.

The set was up to 21 and the winning team had to win by two clear points. Mountrath had a serving error which made the score 19-20 in Loughrea’s favour. Then Jack Corr served a tough serve which Loughrea could not return. It was 20-20.

A hit from Loughrea made it 20-21. Then Stephen Dunphy spiked a ball straight into the centre of the opposition’s court.

It was 21 -21. Another attack from brother Aaron Dunphy gave Mountrath match point. It was 22-23. St. Brigid’s received the serve from Mountrath, set it up and the hitter put the ball into the net. It was all over. Game. Set. Match.

Mountrath Community School are Mixed Spikeball All Ireland Champions. The school’s staff said that it was a great achievement by all the players and the supporters who travelled on the day.