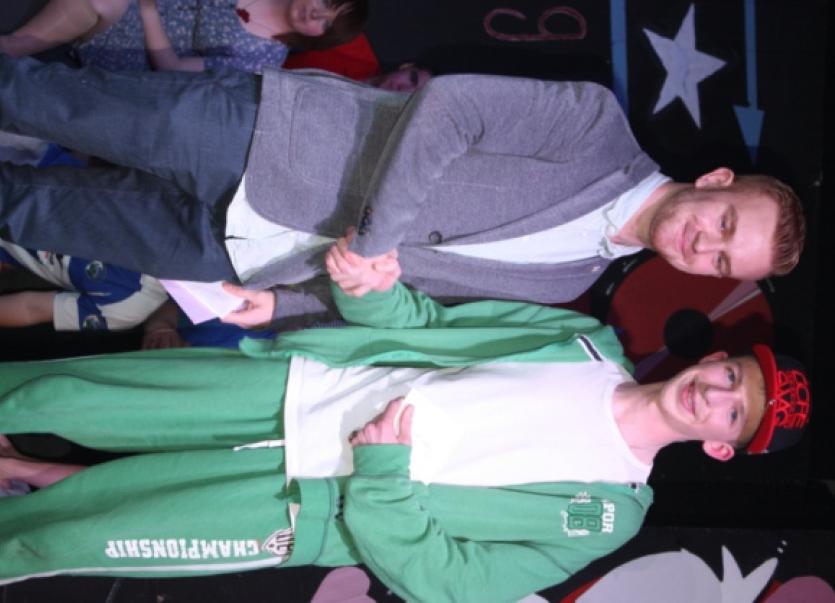 Christopher also directed the show along with Noeleen McCarthy. Choreography was by Ceire Hogan and TY student Gillian Daly. The theme of the play was social stereotypes with the two main characters were a working class boy, Mikey Mason played by Tadhg Gorman and a wealthy girl Violet Thorne played by Shauna Vandendries who ‘crosses the tracks’ to develop a romance despite the objections of their families and friends.

Their mothers were both excellently played by Conor Houlihan and Clare Faherty respectively. The former being exercise mad while the latter was a heavy drinker and smoker permanently watching trashy daytime TV talk shows.

Jack Ledger, Violet’s rugby playing, ‘jock’ boyfriend was played by Jack Walsh while Mikey’s sidekick was Jo Jo an aspiring rapper and DJ played by Sean Faherty. Needless to say the path of true love didn’t run smoothly but by the end of the production the fictional town of Ballycahill had at least two citizens who had broken down some of the barriers between different social ‘classes’ .

The show was a sell out success with rave reviews from all who saw it, from local primary school students to pensioners. The entire cast and crew should be justifiably proud of their achievement with many involved in drama for the first time. The interval act was ‘Trad for Trocaire’ featuring some of the school’s excellent trad musicians and dancers including World Champions, Padraig Burbage and former student, Kara Burbage who runs the Burbage School of Irish Dancing.