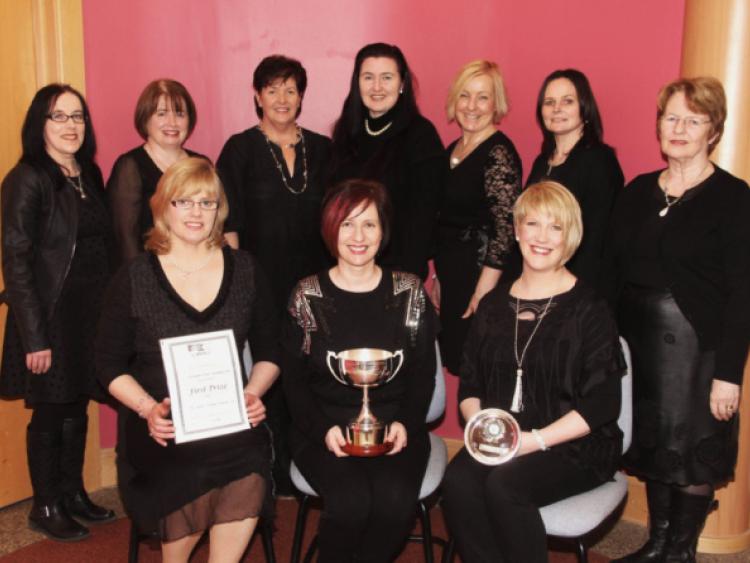 Regular attendees at 12.30pm mass in St Peter and Paul’s Church Portlaoise will be familiar with the contemporary choir.

Regular attendees at 12.30pm mass in St Peter and Paul’s Church Portlaoise will be familiar with the contemporary choir.

The women have been singing at that Mass since 2001, under the direction of Nuala Kelly. Earlier this month, they took their first competitive step and entered the Kilkenny Music Festival in a church choir competition and came home with First Prize – the Dr. Ailish Forristal Cup.

The Kilkenny Music Festival is now in it’s 16th year and runs over five days with competitions for school choirs and orchestras, solo instruments, chamber and wind ensembles and adult church and secular choirs.

“Your blend is impressive and your unison singing has a mellifluous quality. I heard all the words – congratulations. Each singer is engaged in the performance and there is a natural ease in the vocal line. Overall a very pleasing performance,” said Mr Crimmins.

Speaking to the Leinster Express, Nuala Kelly said that she was delighted with the achievement.

“We generally practice on Wednesdays and we put in a lot of work ahead of the competition. Everybody liked being in the compeition, it was a great experience. It was good to focus, and gave everyone a new lift, coming back to our regular performances. The group have grown in confidence, and they are used to being challenged,” she said.

For the Choir’s first time to sing in a competitive environment, they were delighted to come home victorious, and with such complimentary comments.

But it’s back to business as usual for the group and they continue to sing at the 12.30pm mass. They will also be giving special performances over Easter.