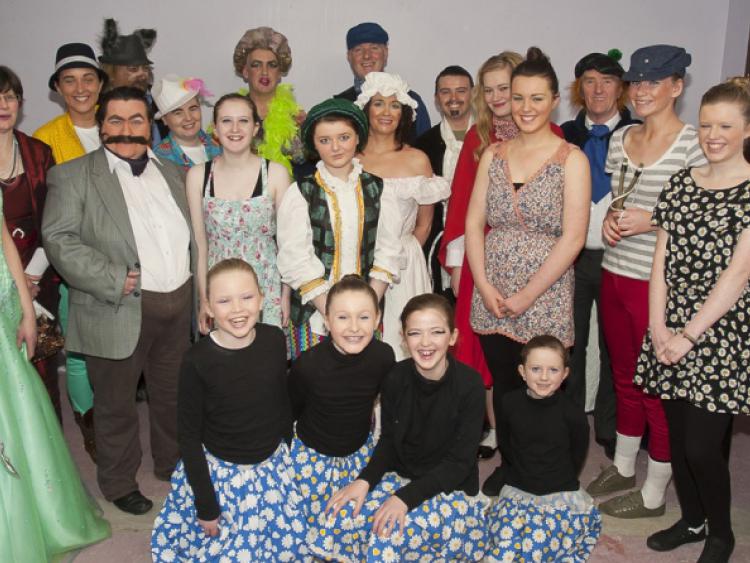 If you are looking to sweep away the January blues than what better way to do so than at the annual Clonaslee panto.

If you are looking to sweep away the January blues than what better way to do so than at the annual Clonaslee panto.

Cinderella, staged by the Clodiagh Players and directed by Suzanne Conroy, gets underway this Wednesday and runs to Saturday. This is the sixth production and the players have sold out all of their shows.

The panto follows the format of the Cinderella story however there are a few extra characters thrown in for comedic affect. The ugly sisters, played by locals Joe Conroy and Becky Dunne are central to the story, starring alongside their new boyfriends Slap and Tickle, played by Bob Tysall and Sean Hyland.

There are another 30 or so children and teens involved in the show providing the audience with a spectacle of song and dance throughout.

The players formed about five years ago, thanks to PP Fr Tommy O’Reilly who has had great success in drama over the years and is highly regarded among many dramatic circles. Fr Tommy then drafted in the current director Mr Danny Hyland.

Danny had just moved to the area at the time with his wife and family from Liverpool. Danny has vast experience in drama and acting also. He had parts in shows like Brookside in the past, but the stage is where he mainly worked as well as teaching speech and drama.

In the past two years Fr Reilly and Danny along with chairperson Mr David Brickly have focused on developing the skills of the group to learn as much about drama as possible.

To date, The Clodiagh Players have given four scholarships to its members to attend the highly credited Gormanston Drama School which is held each year in Meath. These members have honed in on the skills of acting, directing, stage management and production. With the result two new members are involved in the direction of the panto this year.

The Clonaslee group began with only 18 members, and five years later there are nearly 70 people involved - 30 of whom are children. The children, who are integral, range from 6 years up to 18.

Suzanne Conroy and Sarah Egan have volunteered countless hours developing their acting, dancing and singing skills. The children have endless fun and are receiving invaluable lessons that will carry them through their lives.

This is all done free of charge.

The Clodiagh players are very proud of how much has been achieved so far. In the coming year they hope to stage two of Martin McDonagh’s plays The Beauty Queen of Leenane and, if possible, The Cripple of Inish Man.

Groups and drama enthusiasts from other parishes are welcome to the panto and are guaranteed fun and laughs.