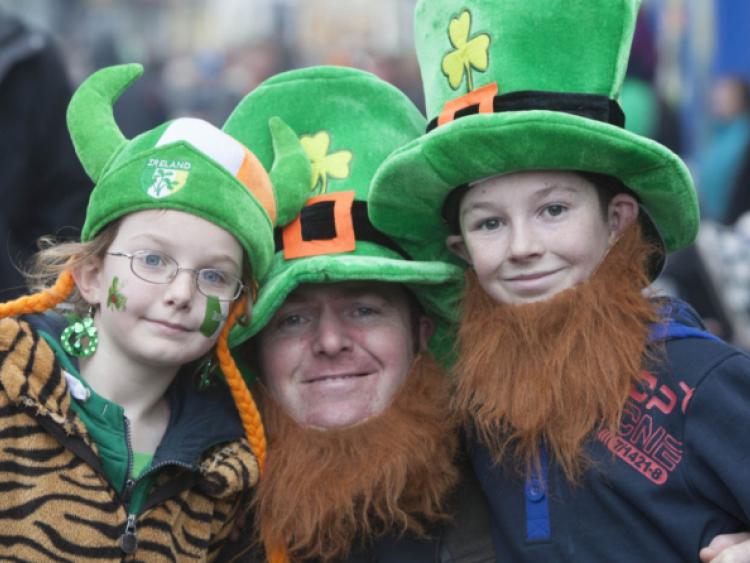 Portarlington had a festival atmosphere before the parade, thanks to wonderful live music and dancing from Portarlington Comhaltas in Market square, with tiny dancer and fiddle player Mary Jo Faherty a favourite with the crowds.

Portarlington had a festival atmosphere before the parade, thanks to wonderful live music and dancing from Portarlington Comhaltas in Market square, with tiny dancer and fiddle player Mary Jo Faherty a favourite with the crowds.

Punters were sitting outside the pubs enjoying the spring weather, and food stalls, bouncy castles and facepainting all added to the atmosphere, while the Bare Soled Fools theatre group added more fun with their ‘hugging machine’.

The parade set off at 3.30 from Station Road, led by St Patrick and the Lions Club.

The theme was celebrating achievements, and some of the sweetest were the signs pinned to the clothes of playschoolers from Ár nÓige and Little Stars, announcing they knew their colours, or could sing twinkle twinkle.

Big achievements were celebrated too; the town took the first runner-up prize in the national Pride of Place competition this year, while gold medal champion swimmer Nicole Turner aged 12, who will represent Ireland in the World Dwarf Games next August, got great applause.

Music was provided by the bands of Presentation Primary School and St Patrick’s BNS, and by harpists from Rath NS, who are taking lessons as part of Music Generation Laois.

The Hazel Hackers pony club were a great hit, and the Ferns playschool were walking to celebrate 30 years in business.

The Silly Billies playschool were impossible to miss, with all children in hi vis jackets.

Port Tidy Towns were celebrating a great year by dressing as Abba, with the banner ‘the winner takes it all’.

The Festival Francais de Portarlington were marching to announce this year’s event on July 11,12 and 13, while Portarlington Pharmacy were proudly listing the many local charities and events they support.

The ebullient MC Ciaran Dunne, a Dublin ‘blow-in’, had to get some help from Cllr Eddie Fitzpatrick to identify a baler and spreader, but was stumped entirely by the Coder Dojo club, thinking the computer programming club for children was a type of martial arts.

The parade was rounded off by Portarlington Social Services, who are raffling a 50lb turkey for Easter.

The fun continued in the square afterwards, with music until 6pm.

Organiser Margaret Guijt Lalor said there were no prizes awarded simply because of a lack of manpower.

“They are all champions in our view. It was one of the best parades in years, thanks to the help of the PCDA LovePort staff who did a lot of the work,” she said.