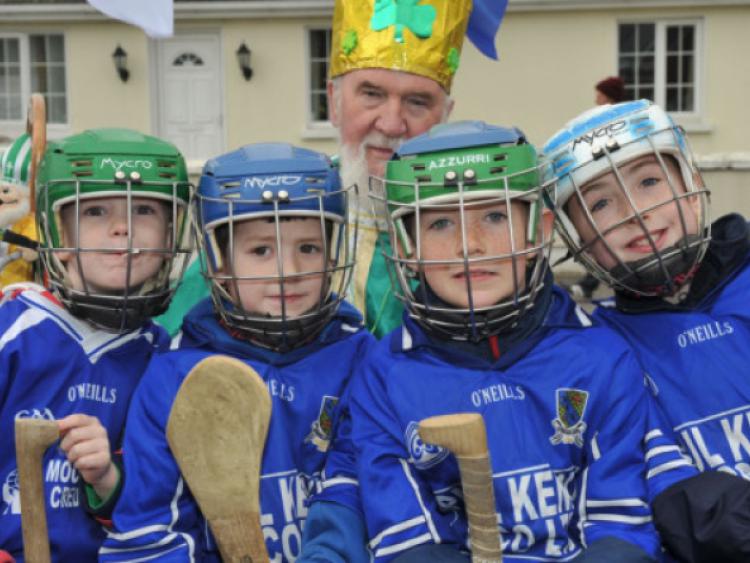 Mountmellick’s O’Connell Square was abuzz with life from the morning of St Patrick’s Day.

Mountmellick’s O’Connell Square was abuzz with life from the morning of St Patrick’s Day.

There were craft and food stalls, bouncy castles, a climbing wall, the bumble bus and Irish tunes from DJ Danny keeping the crowds entertained until the parade began at 2pm.

The sporting element was strong, with junior members of Mountmellick’s GAA, soccer, gymnastics and athletics clubs, Sarsflelds girls with a trailorload of trophies and The Rock GAA members, all chanting, thumping hurls and hoisting cups to cheers from the crowds.

Many groups took part, from the young students of Mary Culleton’s Naíonra playschool, in brightly coloured fancy dress, to the town’s Active Retirement group, who got a great clap.

Mountmellick’s Darkness into Light committee marched to show their next fundraising walk for suicide prevention centre Pieta House, which is on May 10.

Keeping with the topical parade theme of ‘water’, Mountmellick environment awareness group MEG sported some fun umbrellas with buckets to catch any rainwater, luckily there was none to catch.

Combat Kickboxing and Laois Martial Arts also took part, with the latter performing an impressive routine during and after the parade in the square.

No parade is complete without free sweets, and SuperValu and Mace duly obliged to the delight of onlookers.

There were some fine vintage cars and tractors, including a deLorean, a 1956 fire engine, and Peter Killeen driving his Super Dexta vintage tractor.

The Limetree Airfield towed a Microlight plane, while the Druid inn had some of their happy customers in fancy dress.

The recent Mountmellick Drama festival had a banner thanking supporters, and it was rounded off by Ballyfin Vintage and Veterans Club with signs proclaiming “no water metres, no property tax wanted here”.

After the parade ended, Cllr Paddy Bracken handed out the trophies.

Afterwards the family fun continued in the square, with more performances by Mountmellick Comhaltas and Laois Martial Arts, and music from DJ Danny.