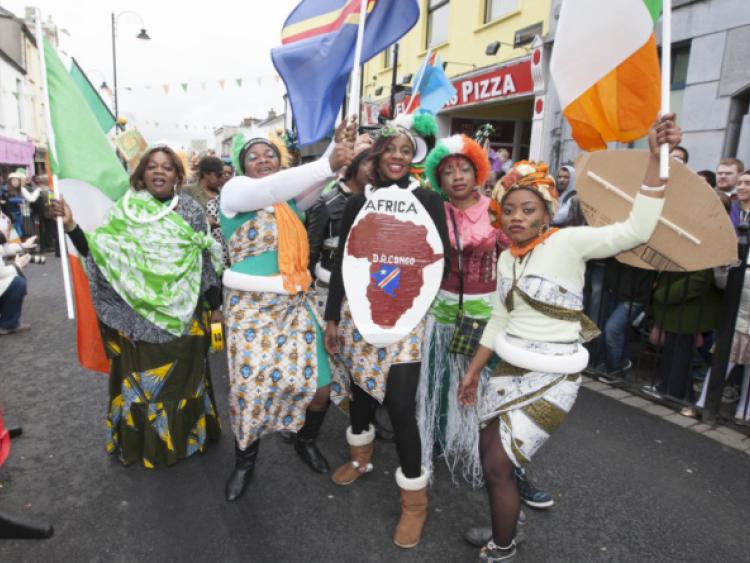 The earlier time of 12.30 and a shorter route this year ensured a big turnout for the Portlaoise parade.

The earlier time of 12.30 and a shorter route this year ensured a big turnout for the Portlaoise parade.

St Patrick, aka Martin ‘Madness’ Maher led the parade, followed by the mascot of Portlaoise Panthers Basketball club, who are National Cup Champions. The black panther was chauffered by John Hendy in his vintage car, followed by proud club members.

Organisers had encouraged community participation, and they certainly got it, with floats from the Special Olympics, Mosse Brownies, Mountmellick Scouts, Aware, Treo Nua centre and Portlaoise Panto among others.

Sporting clubs from Portlaoise, Clonad, Ballyfin, Clonaslee and Ratheniska all took part, cheered by the thousands of happy bystanders lining the streets.

There were vintage cars aplenty, and some making political statements. Tower Classic & Vintage Club towed a garden shed with the sign ‘affordable housing by NAMA’, and Ballyfin’s club protested against water charges and property tax.

There were plenty of laughs, particularly for the Major Regrets from Castlecomer, a group of well endowed ‘women’ in figure hugging pink t-shirts, and for John Styles Fallen Animals, who brought a gorilla and her baby, horses and cows, a suspicious vet inspector and a cross farmer. Local character Mick Kerry brought along a ‘Bean on the Bog’ a lady found while cutting turf on Kyletalisha bog.

Animals featured large, from the ponys of Fossey Mountain Springs Ranch in Timahoe, to dogs from Petworld and the Laois Guide Dogs walking with their masters.

Music was supplied by St Joseph’s Accordian Band who knocked out the favourites in great style, by Portlaoise Comhaltas, and by Shanahoe School Band who played Ireland’s Call for dignitaries on the viewing stand, including county manager Peter Carey, Brian Stanley TD, Portlaoise councillors and local clergy.

Businesses were encourage to get creative, and Andy’s Furniture Stradbally did that, entering a ‘walkin’ wardrobe, while Relish Brasserie brought a crowd of revellers dressed up in bright colours.

The fun continued afterwards, with local rock bands ‘I am Godzilla You are Japan’, and ‘Presidents of Jam Rock’ playing live, and children’s entertainment in the square.

Organiser Ger Whelan who was the MC on the day, was delighted with the day.

“It’s as good a parade as I’ve seen in ten years, there was a great community effort into making the floats. There was a great buzz on the town after, the chippers were all full. I would like to thank all the committee who have been meeting every Monday since January. All the work they put in paid off,” he said.

The committee are holding an awards night this Friday March 21 in the Parish Centre at 8pm with €300 for the top prize, and lots of category prizes and certificates.