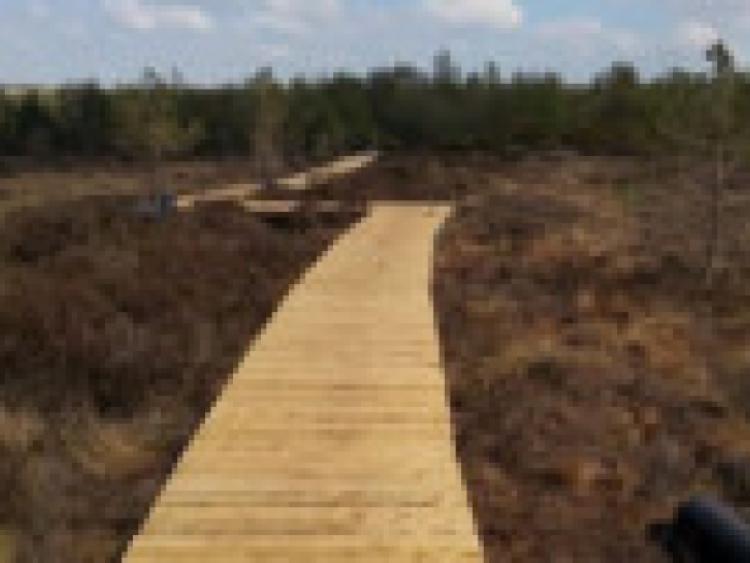 Volunteers have nearly finished the first stage of the boardwalk on Abbeyleix Bog, which, when completed, will stretch to nearly 300 metres.

Volunteers have nearly finished the first stage of the boardwalk on Abbeyleix Bog, which, when completed, will stretch to nearly 300 metres.

Speaking to the Leinster Express, the chairman of the Abbeyleix Bog committee, Gary O’ Keeffe said that the community has really come together to help out.

“We’re nearly finished the first stage now, and all the labour has been voluntary. It has been an incredible experience of all the community groups coming together for this. Members from the Men’s Shed, the ABC group, the Tidy Towns and the GAA to name a few, have been volunteering,” he said.

Mr O’Keefe said that there has been a steady stream of volunteers to help out each week, since the work began, only a couple of months ago.

“We plan to do a hell of a lot more. A lot of work has gone into this, it’s been nearly a year since the initial plans. We’ve had leaders Chris Uys and Eugene O’ Brien there as well,” he said.

The initial funding for the project initially came from Laois Partnership, and Gary added that once this first stage has been completed, the committee will be applying for more funding.

“The interest from the community has been incredible, everyone sees the benefit and the value of this project,” he said, adding that the group were hoping to finish the first stage on Saturday (May 31).

There is plenty of wildlife on the bog for nature lovers to enjoy, including buzzards, otters and deer. Those who wish to visit the boardwalk can do so by heading to the lane on the right of the Abbeyleix Manor Hotel and heading straight down there until they see the boardwalk to their right.

The committee also have a busy programme of events lined up for the rest of the year. Those who want to keep updated can check out Abbeyleix Bog on Facebook.