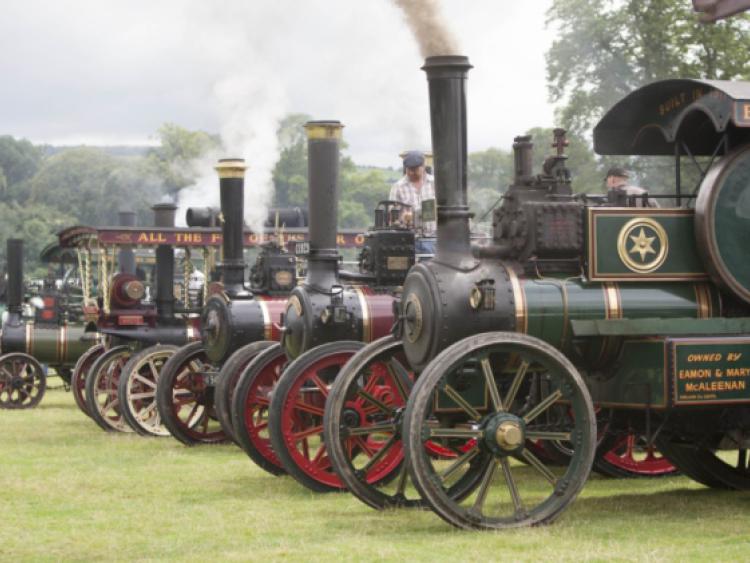 A host of events will take place in Laois over the August bank holiday weekend including steam rallies, a scarecrow festival and a highest high nelly competition.

A host of events will take place in Laois over the August bank holiday weekend including steam rallies, a scarecrow festival and a highest high nelly competition.

Steam enthusiasts and families from all over Ireland and abroad are expected at the 50th Stradbally Steam Rally which will take place on Sunday, August 3 and Monday, August 4.

To celebrate the special 50th anniversary, a whole host of additional entertainment is being organised this year including: 50 working steam engines (some of those appearing are those that appeared at the first ever rally in 1965); 50 Lanz tractors; 50 pre-1930 tractors; A Steam Train Ride through the woodlands of the Cosby Estate on the Narrow Gauge Railway; Loy Digging; Carnival; Pony Rides and much, much more...

Mr Ken Graham, President of the Irish Steam Preservation Society commented: “We are very excited about welcoming our old and new visitors alike to our special 50th rally this year. We’ve all worked hard to ensure that it’s going to be one of our biggest – and best – rallies to date. Not only have we extra vintage exhibits, but we’ve also got extra trade stands to cater for all types of visitors, including auto-jumble, fashion, arts, crafts, jewellery and much much more.”

In addition to the array of vintage on display, numerous family events will be held over the August bank holiday weekend including a carnival, sheep dog demonstrations, army tanks and a steam loco engine which will be giving train rides through the woodlands of the Cosby estate. Steam threshing, stone crushing and sawing timber will also be part of the fun.

Not to be outdone, Camross will be hosting a charity weekend in aid of suicide prevention with the highlight undoubtedly being the Highest High Nelly Challenge on Sunday which leaves the Cut at 2 pm and is followed afterwards by a barbecue.

The Abbeyleix Rectory Garden Fete will be held on Monday 4th August starting at 2.00 pm. Last year the Fete celebrated 51 years and thanks to a great team and the crowds who turned out it was a another memorable event. Again this year there will be the ever popular Kids Korner, along with raffles, stalls, refreshments etc.

Portlaoise will kick off events early with a sponsored head shave by Billy and Sandra Farrell in aid of friends of Emily Brennan in Maggie Mays. This will be followed by a 7k walk on Sunday, August with start time at 3 pm from Eamonn-A-Chnoic, Raheen.

An expected 13,000 visitors are expected to descend on Durrow Scarecrow Festival.

The festival is organised by the Durrow Development Forum with a clear focus of providing great value entertainment with music, family friendly show, craft demonstrations and workshops and much more over the nine jam-packed days.

The festival has a total prize fund of €3,000 which ensures stiff competition amongst entries to make off with the All Ireland Scarecrow title. The introduction of ‘Teen Zone’ last year was a big success with teenagers and is back in an expanded fashion this year with activities each week night from 7 pm to 9 pm. Musical entertainment will include Abbeyfolk and Cua music.

Portarlington Tidy Towns are hosting a Country and Western style B-B-Q with music on Sunday August 3 from 9pm in the Hawthorn Lounge. Tickets are €10 each and are available from the Hawthorn Lounge or from Tidy Towns committee members. For further information visit their facebook page or email porttidytowns@gmail.com.